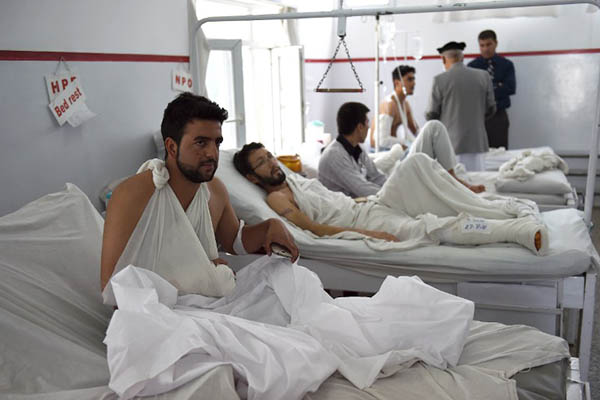 Her voice quaking with emotion, law student Ghazia recalled the horror of coming face-to-face with a gunman who stormed the American University in Kabul, as her terrified classmates leapt out of second-floor windows to save themselves. Pandemonium broke out on Wednesday when a militant drove an explosives-packed car into a university wall, shattering the balmy evening calm and paving the way for two gunmen to storm into the campus packed with hundreds of students.

Many of Ghazia’s peers barricaded themselves inside classrooms, pushing chairs and tables against the doors, while others made a mad scramble to jump from windows, suffering grievous injuries.

Terrified, 21-year-old Ghazia chose instead to run into the corridor, joined by a couple of classmates, in a moment she thought was going to be her last. She found some fellow students lying on the ground, their bodies covered in blood. The next moment was even more harrowing.

“As I ran, I turned around for one moment to find a gunman shooting in our direction,” she told AFP. “I thought I was going to die, but I kept running until I found myself near the exit. My classmates who stayed behind in the class were either killed or badly wounded.”

Sixteen people died and dozens of others were wounded in the 10-hour raid, the first major militant assault on a prominent university in Afghanistan. Taliban militants are suspected of being behind the assault, which has cast a pall on the education sector, seen as a rare symbol of hope for Afghanistan’s youth at a time of rising insecurity.

The growing number of students attending university, especially women, has been hailed as a rare success story in Afghanistan since the 2001 ouster of the Taliban regime, which banned women’s education. But Wednesday’s attack could set back those hard-won gains, some observers fear.

“Education is one of Afghanistan’s brightest achievements since the fall of the Taliban government,” said Kabul University professor Shahla Farid. “This attack shows our youth, already forced to curtail their movements because of insecurity, are not safe even inside classrooms. I fear this will be particularly devastating for women students.”

But male students were also hit hard by Wednesday’s tragedy. “I am traumatized—I cannot believe they are dead,” said a 23-year-old student, visibly shaken. He was referring to the death of fellow student Jamshid Zafar, who he was trading jokes with just minutes before he was gunned down.

He was killed along with Naqib Ahmad Khpulwak, a promising young lecturer in the university’s law department who recently completed his master’s degree in the United States and returned to Afghanistan to teach.

Amid the despair, students also paid tribute to Mohammed Akbar Andarabi, a police commander who was gunned down as his team guided hundreds of students to safety. “He was one of our finest men. He died protecting the students from terrorists,” interior ministry spokesman Sediq Sediqqi said about Andarabi, lionized by local media as “Afghanistan’s Achilles.”

The private university has been temporarily closed after the attack, as students were plunged into mourning. But some also struck a note of defiance.

“I will go to university the first day it reopens,” said student Tahmina Amanzai. “I know I will be trembling with fear but I will definitely go. I can’t let terrorists stop me from continuing my education,” she told AFP.