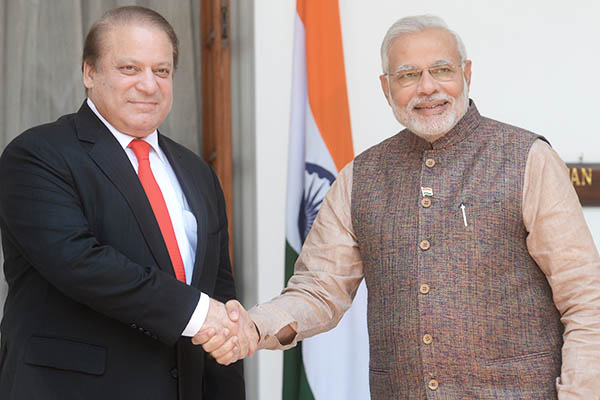 Modi “underlined our concerns related to terrorism” to Sharif during landmark talks in New Delhi on the first day of his term in office, said Indian foreign secretary Sujatha Singh.

“We want peaceful and friendly relations with Pakistan. However, for such relations to proceed it is important that terror and violence is brought to an end,” Singh told reporters after the meeting. She added that Modi conveyed the message that Islamabad must “abide by its commitment to prevent its territory and territory it controls being used to stage terror attacks on India.”

Sharif said he saw the talks as an “historic opportunity” to improve ties between the South Asian countries, which have fought three wars since independence in 1947. “We should rid the region of instability and insecurity that has plagued us for decades. Consequently, it was important for us to work together for peace, progress and prosperity,” he told reporters.

But he said he also told Modi that engaging in “accusations and counter-accusations would be counter-productive.”

In an unprecedented move, Modi invited Sharif and the other leaders to his inauguration, signaling his intention to be a strong regional leader after his rightwing party’s landslide general elections victory. It gives him a powerful mandate to reach out to Pakistan to try to mend strained relations, which completely broke down after attacks in Mumbai in 2008 by Pakistani militants that killed 166 people.

Although ties have improved slightly, tensions remain amid mutual distrust and regular skirmishes along their disputed Kashmir border.

During Tuesday’s talks Modi also underlined his desire to improve commercial ties, Singh said. “There was discussion on trade and we noted that we were fully ready to fully normalize trade and economic relations. Both prime ministers expressed their interest in having this done as early as possible,” Singh added.

Trade between the two countries is presently around $2.5 billion, with Indian exports accounting for $1.75 billion.

In his other meetings, Modi called on Sri Lankan President Mahinda Rajapakse to speed up reconciliation with the island’s ethnic Tamil minority after a decades-long separatist war that left at least 100,000 people dead. “Sri Lanka should expedite the process of national reconciliation in a manner that meets the aspirations of the Tamil community for a life of equality and dignity in a united Sri Lanka,” Singh said of the meeting.

Modi also thanked Afghan President Hamid Karzai for his country’s help in repelling an attack last week on an Indian diplomatic mission in the west of his country. The attack “only strengthened our resolve to work together for the development and reconstruction of Afghanistan, a sovereign Afghanistan, Afghan-led and Afghan-controlled,” Singh said.

Karzai blamed Lashkar-e-Taiba for Friday’s attack on the consulate in Herat, but the militant group has denied responsibility.