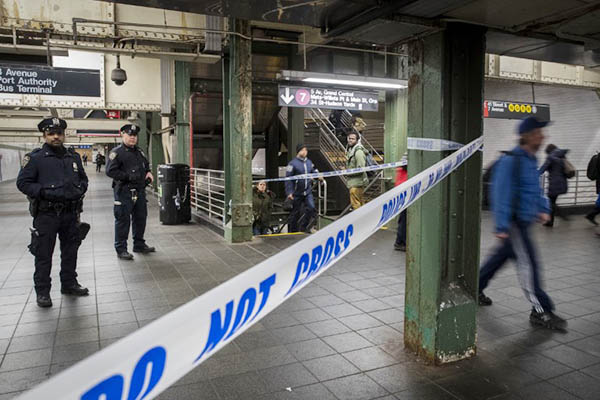 A 27-year-old immigrant from Bangladesh detonated a homemade pipe bomb strapped to his body in a crowded New York subway passage during the morning rush hour on Monday, wounding three people and putting the city on edge just six weeks after a deadly truck attack.

Akayed Ullah told police investigators he wanted to avenge U.S. airstrikes on the Islamic State group and was also inspired by Christmas terror plots in Europe—choosing the location for his attack by Christmas posters on the subway walls, U.S. media reported. But his bomb failed to detonate properly, leaving him the only one seriously harmed by the assault.

The blast took place in the subway station at the Port Authority bus terminal, not far from the city’s iconic Times Square, sparking commuter panic and travel disruptions.

A closed-circuit security video showed commuters scattering as the bomb exploded and one body—that of the bomber—on the ground after the smoke cleared.

Authorities attributed the minimal damage from the simple device attached to Ullah’s chest to a malfunction. The explosion left him with several burns to his torso and hands, and he was sent to a hospital in a “serious” condition.

The other three injured people suffered ringing in their ears, headaches and other minor complaints, and there was no significant damage to the subway structure. “Fortunately for us, the bomb partially detonated,” New York Governor Andrew Cuomo said. “It did not fully have the effect that he was hoping for.”

Cuomo said Ullah was not part of a “sophisticated network” but appeared to have been “influenced” by the Islamic State or other extremist groups.

The man’s family issued a statement through the Council on American-Islamic Relations-New York saying they were “heartbroken” by the attack and by the allegations against Ullah. But they also said they were “outraged” by the behavior of police investigators, who they said took a teenage relative out his high school class, questioning him without a lawyer present.

The attack came as the Christmas-New Year holiday season was moving into high gear, underscoring the possible threat that lone actors inspired by Islamic State or Al Qaeda pose to festive crowds.

In Berlin last year, an I.S.-inspired Tunisian refugee drove a large truck into a crowd at a Christmas market, killing 12.

Islamic State supporters have made online threats and urged sympathizers to conduct attacks on Western targets during the holiday season. New York was rocked on Oct. 31—the Halloween holiday—when an immigrant from Uzbekistan drove a rented truck down a busy bike and pedestrian path, killing eight people and injuring 12.

In November, the U.S. State Department issued an alert for travelers to Europe during the holiday season, reminding them of the Berlin attack as well as the assault on a New Year’s Eve party in an Istanbul nightclub last year that left 39 people dead. “U.S. citizens should exercise caution at holiday festivals and events,” the State Department warned. “Extremists continue to focus on tourist locations, transportation hubs, markets/shopping malls and local government facilities as viable targets.”

Cuomo said the latest bombing underscored that New York is a perennial target, 16 years after the 9/11 attacks. “This is New York. The reality is that we are a target by many who would like to make a statement against democracy, against freedom,” he said. A bomb in a subway station “is in many ways one of our worst nightmares,” Cuomo said.

Sayfullo Saipov, the Halloween attacker, had entered the country in 2010 under the “Diversity Immigrant Visa” program, by which the United States has sought to widen the sources of immigrants. Ullah arrived seven years ago as the member of a family already in the United States, under what is known as “chain immigration.”

Trump has called to eliminate both programs and move to a merit-based immigration policy. As part of his crackdown on immigration, the president’s administration has slashed refugee arrivals, blocked travelers from six Muslim-majority countries and pressed for tighter restrictions on all those seeking to legally move to the United States.

But Mayor Bill de Blasio, a strident critic of Trump’s immigration policy, said the president’s criticism was misplaced, stressing that Ullah had no criminal record and would not have been allowed into the country if his sponsors were not of “good standing.”

“We have to come back to American values…if someone does something which indicated there are threats, we act on it,” he told NY1 television.