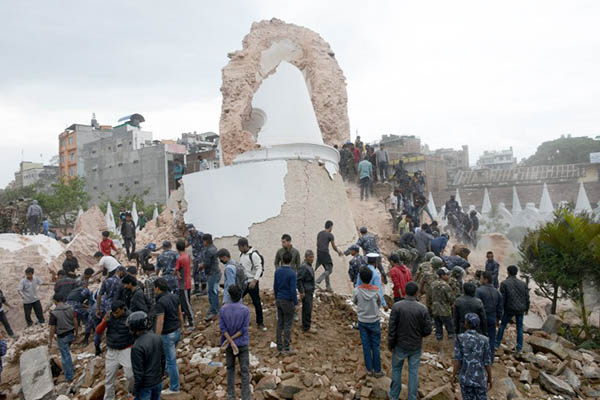 Death toll from massive quake rises to over 600, according to Nepalese government official.

“Death toll has reached 688 so far across the country,” said home ministry spokesman Laxmi Prasad Dhakal, updating a toll of 449 given earlier.

Television footage showed that large numbers of offices and homes had collapsed in Kathmandu while roads had been split in two by the force of the impact. Panicked residents rushed into the streets as the tremor erupted around midday, with the impact felt hundreds of miles away in big swathes of northern India and even in Bangladesh and Pakistan.

The United States Geological Survey said the quake struck 81 kilometers northwest of Kathmandu, with walls crumbling and families racing outside of their homes. “The walls of houses have collapsed around me onto the road. All the families are outside in their yards huddled together. The tremors are still going on,” an AFP reporter said in Kathmandu.

Another resident recounted scenes of panic and mayhem. “Everything started shaking. Everything fell down. The walls around the main road have collapsed. The national stadiums gates have collapsed,” Kathmandu resident Anupa Shrestha said.

A landmark nine-storey tower also collapsed, with several bodies seen at the site of the disaster, witnesses and television footage showed. Around a dozen bodies were taken away from the ruins of the Dharhara tower in the center of the capital.

“We have received reports that there is a big loss of property and life in Nepal,” said Krishna Prasad Dhakal, the deputy chief of mission at Nepal’s Embassy in New Delhi. “Possibly hundreds of people have died in various parts of the country, particularly in Kathmandu and Pokhara.”

Police confirmed that many buildings had collapsed. “Our focus is on rescue in the core areas of Kathmandu where the population is concentrated,” Dinesh Acharya, metropolitan police spokesman, said. “Many houses and buildings have collapsed,” he told AFP.

Initially measured at 7.5-magnitude, the quake was later adjusted to 7.9, with a depth of 15 kilometers, the USGS said. It hit 68 kilometers east of the tourist town of Pokhara.

Witnesses and media reports said the quake tremors lasted between 30 seconds and two minutes and were felt across the across the border in India, including in the capital New Delhi. “We are in the process of finding more information and are working to reach out to those affected, both at home and in Nepal,” Indian Prime Minister Narendra Modi said in a tweet. The AFP office in Delhi was evacuated twice following the quake, a correspondent said.

Laxman Singh Rathore, director-general of the Indian Meteorological Department, told reporters that the impact had been felt across large areas of northern India. “The intensity was felt in entire north India. More intense shocks were felt in eastern Uttar Pradesh and Bihar, equally strong in sub-Himalayan West Bengal, Sikkim,” he said. Rathore said that a second tremor of a 6.6 magnitude had been recorded around 20 minutes later and centered around the same region. “Since it is a big earthquake, there are aftershocks and people should stay cautious,” he said. “The damage potential of any earthquake above seven magnitude is high. The duration of the earthquake tremors was different at different places. It was around 50-55 seconds long in Delhi.”

The earthquake was also felt across large areas of Bangladesh, triggering panic in the capital Dhaka as people rushed out onto the streets. In the garment manufacturing hub of Savar, on the outskirts of Dhaka, at least 50 workers were injured after the quake set off stampede in a garment factory, according to private Jamuna television. A 6.9-magnitude quake hit northeastern India in 2011, rocking neighboring Nepal and killing 110 people.