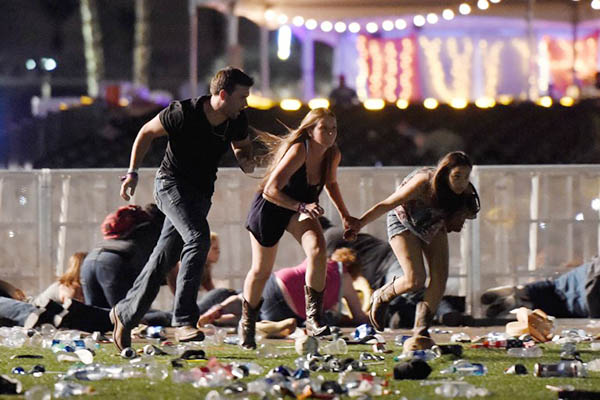 At least 20 people dead, over 100 others injured after gunman targets concert on Sunday night

At least 20 people were killed and more than 100 wounded when a gunman opened fire on a country music concert in Las Vegas on Sunday, police said.

“We have in excess of 100-plus injured and excess of 20-plus that have died at this point,” Las Vegas Metro Police Sheriff Joseph Lombardo told a press conference. The gunman, who was a local man, was killed after police “engaged the suspect,” Lombardo told reporters.

Police said that the shooter was taken “down” after officers swarmed over the famous boulevard following reports of multiple shots being fired from the Mandalay Bay casino resort towards thousands of fans at a country music concert. “At this time we do have a suspect down,” Las Vegas police officer Steve Gomez told reporters, without elaborating. “We have numerous victims right now,” he added.

Video footage circulating on social media showed a large crowd enjoying a concert as part of the Route 91 country music festival just outside the casino before what sounded like volleys of automatic gunfire halted the performance. “We heard [what] sounded like a glass breaking, so you looked around to see what’s going on and then heard a pop, pop, pop,” Monique Dekerf told CNN. “You’d think for a moment okay we’re fine, there’s no more gunfire, then it starts again.” Her sister said it sounded like “the shots were coming from the right side … it sounded like they were right beside us too … it was right there.”

A witness told local TV news station KLAS that he saw someone several stories high firing hundreds of shots into a crowd of people. Police however denied reports of multiple shooters.

“At this time we do not believe there are any more shooters,” the department wrote on Twitter.