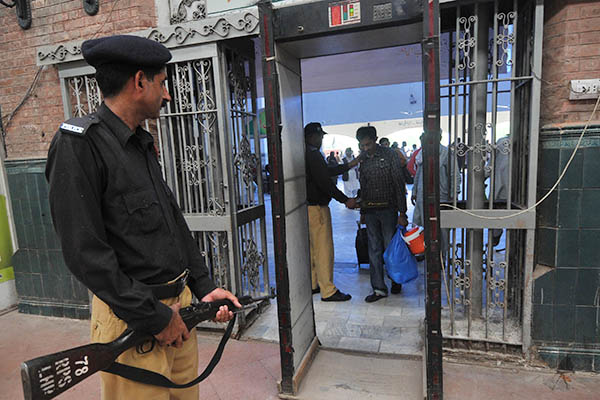 A bomb exploded on a passenger train in central Pakistan on Monday, killing a toddler and wounding 13 others, officials said, in what the railways minister called “an act of terrorism.”

The device on the Shalimar Express from Lahore to Karachi went off as it passed through fields near the town of Toba Tek Singh in Punjab province.

“It was an act of terrorism. The explosive was planted in the washroom of a bogie (wagon),” railways minister Saad Rafique told reporters in Lahore. “Fourteen people have been injured, condition of three of them are critical.”

Mohammad Hussain, medical superintendent in main Toba Tek Singh hospital said that a child, aged two and a half years, had succumbed to his injuries in hospital.

Shehzad Asif, district police chief confirmed the death and said that bomb disposal experts and police investigators were still on site and examining the “remnants and broken pieces of the explosive material.”

TV footage showed the explosion had damaged the roof of the carriage but not forced the train off the rails, suggesting a relatively low-intensity blast.

Farah Masood, a senior government official in Lahore, confirmed that a locally-made explosive device was used in the explosion and that 14 people had been injured.

There was no immediate claim of responsibility for the blast.

Pakistan is battling a homegrown Islamist insurgency and faces near-daily bombings and shootings in the troubled northwest, but attacks on the railway are relatively rare. A bomb near the waiting lounge for the luxury Lahore-Karachi Business Express train last year killed two people.