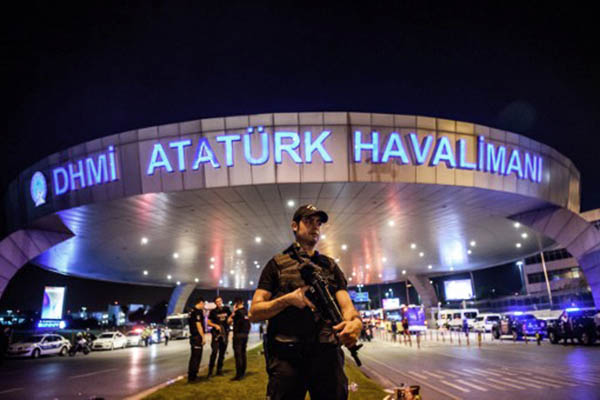 Turkish Prime Minister Binali Yildirim said Wednesday that early signs suggested the Islamic State group was behind a triple suicide bombing at Istanbul’s Ataturk International Airport, as he announced the death toll in the attack had risen to 36.

“According to the most recent information, 36 people have lost their lives,” Yildirim told journalists at the scene of the attack, adding that “the evidence points to Daesh,” another name for I.S. The premier added that there were “many injured,” without giving a figure.

Three suicide bombers opened fire at passengers with automatic rifles before blowing themselves up, Yildirim said. He did not identify the bombers or give their nationality.

The prime minister added that the attackers had arrived at the airport by taxi. He ruled out any security failings at Ataturk, one of Europe’s busiest air hubs. Air traffic resumed at the airport from 3:00 a.m. local time, Yildirim added.

The United States condemned what it called the “heinous” bombing and gun attack, pledging “steadfast” support for Turkey. “Ataturk International Airport, like Brussels Airport which was attacked earlier this year, is a symbol of international connections and the ties that bind us together,” White House spokesman Josh Earnest said in a statement. “We remain steadfast in our support for Turkey, our NATO ally and partner, along with all of our friends and allies around the world, as we continue to confront the threat of terrorism.”

State Department spokesman Mark Toner said the attack was “only the latest in a series of attacks aimed at killing and maiming innocent civilians. Such attacks will only reinforce our determination to work with the government of Turkey to counter the scourge of terrorism and support all those across the region who are working to promote peace and reconciliation.”

Hillary Clinton, the presumptive Democratic presidential nominee, said in a statement that “all Americans stand united with the people of Turkey against this campaign of hatred and violence.”

She added: “Today’s attack in Istanbul only strengthens our resolve to defeat the forces of terrorism and radical jihadism around the world. And it reminds us that the United States cannot retreat.”

Her rival Donald Trump, the presumptive Republican nominee, said the threat of terrorism “has never been greater,” adding in a statement: “We must take steps now to protect America from terrorists, and do everything in our power to improve our security to keep America safe.”

U.N. Secretary General Ban Ki-moon called for stepped-up cooperation in the fight against terrorism following the attack, while expressing “his deepest sympathy and condolences to the families of the victims and to the government and people of Turkey,” his spokesman said in a statement.

The U.N. chief “stands firmly by Turkey as it confronts this threat and stresses the need to intensify regional and international efforts to combat terrorism and violent extremism.” The statement added: “The Secretary-General hopes that the perpetrators of this crime will be identified and brought to justice.”

The triple-suicide bombing and gun attack was the fourth deadly bombing in Istanbul this year. The government has blamed previous attacks on both Kurdish rebels and the I.S. militant group.