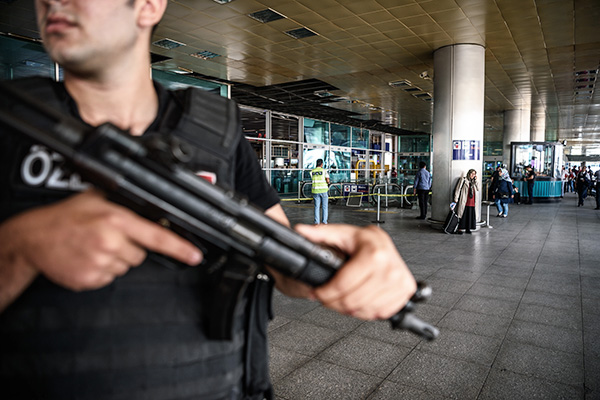 Turkey may ruin its own hard work and progress by relying on non-state actors to cause trouble in neighboring nations.

The physical terror attack on Istanbul’s Ataturk International Airport, reported to have left 41 dead and over 200 injured, is a reminder, again, of how difficult it is to preempt terrorist attacks and why terrorist attacks present such a challenge to states and security forces.

The fundamental objective of any terror attack is to create a spectacle where the output in terms of damage is exponentially higher than the inputs required for mounting the attack. In other words, the attacker uses simple expedients in planning to achieve a force-multiplier effect that raises the cost for the victim state ridiculously in relation to the attackers’ investment in carrying out a plan.

Let’s juxtapose some facts in this case.

Reports so far indicate the airport was attacked by three men wearing IED belts and carrying small arms. Cost: three trained men (easily available), explosives (various types, easily available), assault weapons (easily available), and a vehicle to carry them. No matter how we do the costing, including their travel, the money spent on planning, the money spent on possibly getting an insider (if at all) and miscellaneous expenses, the operation could not cost more than a few thousand dollars. But let’s say it cost $50,000, a ridiculously high cost with sleeper cells in position and the network functioning. Still, we shall use this figure and compare it with the cost for the victim.

A good starting point will be the Ataturk Airport and Turkish aviation.

According to available statistics, the airport served nearly 61 million passengers in 2015. That makes it the 11th busiest airport in the world in terms of total passenger traffic and the 10 busiest in terms of international passenger traffic. A Jan. 15, 2016 report in Bloomberg said Ataturk had become the 3rd busiest airport in Europe, behind Heathrow and De Gaulle and ahead of Frankfurt in 2015. The report also said that “Istanbul Ataturk has now added more than 16 million passengers in three years, compared with less than 4 million at Frankfurt. With Turkish Airlines planning to almost double the fleet to about 440 jets by the end of 2021 the hub seems set to challenge Heathrow and Charles de Gaulle…”

The report goes on to add: “Ataturk, which passed Madrid and Amsterdam in 2014, posted an 8.2 percent jump to 61.32 million, cementing its status as a global hub to rival those of Gulf carriers such as Dubai-based Emirates.”

Now, compare our arbitrary and deliberately high cost of $50,000 for the terrorist operation with the value of the target and the cost the attack will extract from Turkey. Incidentally, on Dec. 23, 2015, Sabiha Gökçen International Airport, the second airport that serves Istanbul, saw an explosive-related incident that killed one and wounded another. That bomb was planted by a small Kurdish group.

But the overall cost is much more than the immediate cost to the airport and Turkish aviation in terms of heightened security and inconvenience, drop in the number of flights and passengers (U.S. carriers, as also Iran, have suspended flights for now), at least in the short-term and the fear of another attack in the future. And while Istanbul airport will be safe for some time, terrorist group(s) could target other airports popular with tourists. Security procedures will have to be revisited and enhanced, raising the cost of manning and managing the airports. The cost might be transferred to the airlines and passengers, which will also have to bear the inconvenience enhanced security always causes. That will have an impact on tourists, already visible. Reports this year suggest a 10 percent drop, up from 2.5 percent in 2015. Tourists are like water. They take the line of least difficulty.

According to the U.N. World Tourism Organization, Turkey saw a massive increase in foreign tourists from 12.8 million in 2002 to 21.2 million in 2005. It became one of the top 10 foreign tourist destinations in the world, earning tens of billions of dollars in revenue. Since 2015 there’s been a drop because of Russia’s economic crisis, tensions with Moscow and incidents of terrorism, with the U.S. State Department issuing travel advisories to U.S. citizens.

One can cite other statistics on direct, opportunity and prescriptive costs to Turkey. But the fundamental point is about comparing the cost of such an attack for the attacker to that of the target state. The differential is colossal. That’s what makes terrorism so attractive to whoever wants to operationalize a grudge against a state.

But there’s another lesson too, for Turkey, as also other states. Policies that rely on non-state groups to bring down a government or create trouble in another state have a terrible way of boomeranging. As I have mentioned in this space before, when I interviewed then-President Abdullah Gul in Ankara and later when Newsweek Pakistan hosted him in Lahore, he had one message for us: zero conflict in the region, political stability and economic development. Between then-foreign minister Ahmet Davutoglu (later P.M. and now a private citizen) and Gul (away from politics), Turkey seemed destined for an upward trajectory. All that is in slow-motion collision with Ankara’s (read: Erdogan’s) Syria policy and mis-governance at home.

Years of hard work and great progress could unravel if Ankara does not change course at home and abroad. President Erdogan has given no indication so far that he understands the urgency of what stares Turkey in the face.