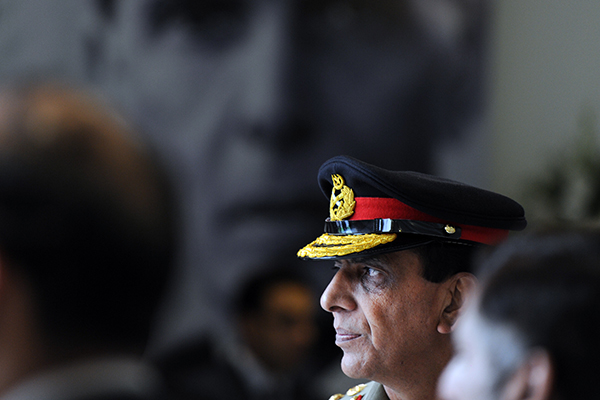 Pakistan’s Army chief, Gen. Ashfaq Kayani, warned militants on Monday that they should harbor no misgivings about the willingness and ability of his forces to take them on.

Kayani’s statement, released by the military’s Inter-Services Public Relations department, comes a day after an IED explosion killed Maj. Gen. Sana Ullah Khan in what was one of four “cowardly” attacks in the violent federally-administered tribal areas since Sept. 14. In all, the attacks killed six security personnel and wounded six others.

“General Kayani [has] reiterated Pakistan Army’s resolve and unflinching commitment in fighting the menace of terrorism, in accordance with the will of the nation and at any cost,” states the ISPR release. “While reaffirming the Army’s support to the political process, he also said, unequivocally, that terrorists will not be allowed to take advantage of it.”

On Sept. 9, a summit of the country’s political parties resolved, unanimously, to stand by the Army and also to initiate peace talks with militants, insurgents, and gang-war criminals in the northwest, southwest, and in Karachi. Prime Minister Nawaz Sharif chaired the conference, which also included Kayani and his Inter-Services Intelligence chief.

The next day, expressing disappointment with Sharif’s government and citing the failed Swat truce with the previous coalition government of former president Asif Ali Zardari, the Tehreek-e-Taliban Pakistan demanded the rollback of troops from the northwest and the unconditional release of all militants from jails across Pakistan as preconditions for talks.

“The government is under pressure from the Army and the intelligence agencies and such agreements have wasted our precious time,” Taliban spokesman Shahidullah Shahid told Newsweek. “Before we enter into any new agreement, the government must prove its sincerity,” he said. “In the past, we have been deceived in the name of peace agreements—both in Waziristan [with the Musharraf-led government] and Swat—and this time we will not proceed unless we see something concrete.”

Four attacks in the tribal areas on Sept. 14 and 15—which the Taliban has claimed—prompted Kayani’s warning to militants that the Army will respond with force, despite the government’s peace efforts, if such violence continued.

Kayani “emphasized again that while it is understandable to give peace a chance through a political process,” states ISPR, citing the language of the all-parties resolution, “no one should have any misgivings that we would let terrorists coerce us into accepting their terms. The Army has the ability and the will to take the fight to the terrorists.”

Late on Sept. 14, terrorists attacked a security patrol near Bannu, killing one security personnel and wounding four others. Hours later, an IED exploded at an Army checkpoint on the Miranshah-Mir Ali road resulting in the killing of a soldier and a member of Khyber-Pakhtunkhwa province’s Frontier Constabulary; two others were wounded.

Then at 12:30 p.m. near Gatkotal village of Upper Dir, came the “most heinous” of the four attacks, says ISPR. An IED explosion killed Major General Khan, the General Officer Commanding of 17 Division, and two others, Lt. Col. Tauseef Ahmad and Sepoy Irfan Sattar. Khan was traveling back from the 10,000-feet-high Army post in Bin Shahi along the Pakistan-Afghanistan border.

Kayani “paid rich tributes to the exemplary courage, total commitment to duty, and … highest leadership qualities” of slain Khan, states ISPR, “The GOC has set a towering example of leading from the front, which is the hallmark of leadership in the Pakistan Army.” ISPR added that Kayani “pledged to stand with the families of the martyred and injured. The Pakistani nation and Army will remain indebted to the sacrifices of their soldiers.”