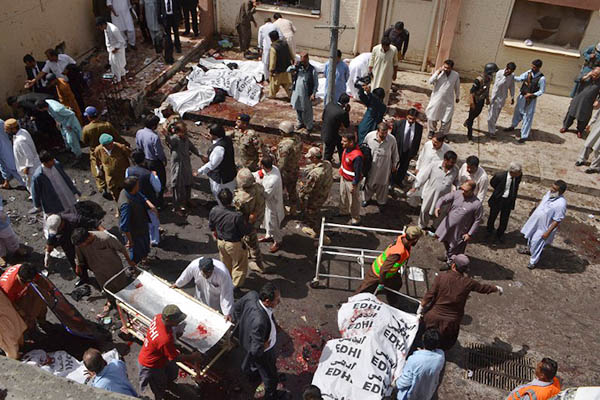 It is impossible to eradicate terrorism without dislodging the fringe within.

Quetta is in deep mourning, as is the rest of Pakistan. The terror attack on Monday has so far claimed at least 71 lives with over 100 injured, some critically. The death toll is likely to go up. There’s anger, there’s desperation, there’s despondency, there are questions.

When will this end? What’s the point of this ongoing, seemingly endless cycle of violence? Was this an intelligence failure? How can terror groups strike thus if the operations against them are successful?

All these questions have been asked after every such attack and there have been many. It’s psychologically and emotionally shattering. In October 2005, an earthquake, lasting about a minute at magnitude 7.6 killed nearly 88,000 people, injured approximately 76,000 and displaced 2.9 million people. By comparison, terror attacks have killed 60,000 over a period of 15 years. And yet, the psychological toll of terrorism is immensely more damaging, the specter of bodies piling up incrementally, the fear of the faceless enemy within, waiting to strike. And strike he does. The fear, the uncertainty, also shatters social trust, the capital on which societies thrive and which provides them their dynamism.

It was a double-tap. First, the Balochistan Bar Association president, Bilal Anwar Kasi, was assassinated in a targeted attack. That was the bait. The attacker(s) knew that Kasi’s killing would result in a mourning, protesting crowd. They were right. It did. That’s when the second, main attack was carried out. The modus operandi is not new. That’s what happened in Lahore’s RA Bazaar attack. That’s the MO used to attack Police Lines in Quetta on Aug. 8, 2013. Inspector Mohibullah was assassinated and when police officers and personnel gathered at the Lines for his funeral, the suicide attacker detonated his deadly wares, killing nearly 40 and injuring 60.

Then there’s the whys and wherefores of the attack. Why lawyers? The community forms a very important pillar of civil and political societies. It offers a soft target with force-multiplier effect. Terror planning and execution looks for multiple gains. Attacks are directed to exploit fault-lines, ethnic, political, sectarian et cetera or they target communities with high impact. The objective: prevent the state from winning; show the security apparatus up as weak; create a spectacle and by doing so instill fear and despondency; force the state’s hand into taking measures that eat into civil and individual liberties; militarize societies and undermine human rights; keep the pot boiling; push states and societies into revenge mode and perpetuate the cycle of violence.

All of this results in instability. The pressure forces states to increasingly rely on legal exceptions, laws that skirt rights and due process and denote the absence of law itself. The important and chilling point in all this is that these ‘gains’ come at very little cost to the terror groups but extract a prohibitive cost from states and societies.

But what about the question of how? Is this an intelligence failure? The term is bandied carelessly. There’s anger in it and that’s understandable. But it is otherwise devoid of much knowledge of how intelligence works. Let me explain it through an analogy.

With the United States in the lead, several countries are trying to create Ballistic Missile Defense shields. The Israeli ‘Iron Dome’ has become fairly famous. The idea is to intercept and destroy incoming ballistic missiles in their terminal phase before they get to their target. The past 20 years have seen debates rage between the proponents and opponents of BMD systems. The opponents have one simple point: it’s a Maginot Line in the sky, a reference to French defensive line which was considered invincible against a likely German thrust and which failed miserably because the German Wehrmacht and Panzer Divisions simply outflanked it. The idea here is that even the best defensive system—arguing that there can be a system effective enough to hit a bullet with a bullet—can and will be overwhelmed through decoys and redundancies.

The problem is worse when we are talking counterterrorism. The enemy within is not a fringe. Operating against and isolating a fringe is relatively easier. The broader society rejects whatever ideology the terror group(s) might be pushing violently. Even so, it takes time and not every attack can be prevented and preempted.

Here, the degree of difficulty is much higher for the security forces. Large sections of society sympathize with these groups. They fund them, directly and indirectly. They provide them recruits. They reject the Constitution and the system. They don’t just live in the ‘badlands’ but could be our neighbors. The forces have not only to operate in areas in the periphery, along the Pakistan-Afghanistan border, but have also to operate in the cities where hundreds, perhaps thousands form sleeper cells, awaiting orders or planning to strike.

Not every vehicle can be checked; not every man can be frisked. Checkpoints work well when there’s a tip. Bringing in explosives and/or weapons is fairly easy. You can field- or factory-strip an AK and carry its many parts hidden in multiple vehicles. Ditto for small quantities of explosive. The sheer volume of traffic makes it impossible to check everyone.

So, what about the chatter? Intelligence does pick up chatter. Arrested terrorists give valuable information on networks and lines of communication. But there are smaller cells in larger groups, configured such that not everyone within the group knows everything about the group. There are also new people getting recruited and trained, people who are not on the radar but can, and will, strike. The Safoora attackers and many others fall in that category. While intelligence agencies focus on seminaries and mosques, you suddenly realize that the profile of the terrorist is changing—or worse, has morphed.

It’s a constant struggle. And while intelligence agencies have become far better at preemptions, there are still major gaps in their capacities, gaps that need to be filled and require funds as well as the will. That is where bounded rationality kicks in. Organizations like to stick to what is known and the old ways of working. They do not reward new thinking. The process of learning and adapting, therefore, is always glacial.

But the essential point is that even if everything were to become A-grade, i.e., the police forces were reformed, NACTA—which everyone seems to talk about as if getting it off the ground will deliver us some kind of panacea—began to perform, the intelligence agencies came to resemble the U.S. NSA et cetera, then too every attack could not be stopped.

That’s a long haul. The terrorist has to be dislocated from the context that strengthens him. That strategy of dislocation requires purging the society, a job more difficult than cleaning the Augean stables. At the firefighting level it would require taking out the sanctuaries in Afghanistan, which is sovereign territory and from where groups like Jamaat-ul-Ahrar, one of the groups that has taken responsibility for the attack, plan and operate.

Terrible tragedy Quetta is, no gainsaying that. But it isn’t the first and it won’t be the last. Tomorrow the terrorists will strike somewhere else. We must be alive to that fact. The irony is that we have to fight, nonetheless. Violence, as I wrote in an article two years ago (Perpetual Conflict), is the new normal.

Pakistan has removed dictators and elected Presidents several times, but has never removed the acting Pakistani Generals, who are the main culprits of continuing public unrest, corruption, autocracy and above all insurgency in Pakistan and its neighboring countries allowing Jihadis to continue their Islamic extremism and bloodshed.
It is almost impossible to get rid of this army but like Turkey, Pakistanis in millions can join hands and uproot the power and dictate of the Army. Also, America, and the West can help Pakistanis in their effort by refusing giving any help to the military but forcing them to change their bloody path.

It is as if America and the West have nothing to do with the jihadist culture prevalent in the region. It was America and the West who in cahoots with Saudi Wahhabi jihadist hordes lead by Osama Bin Laden waged an international jihad in 1980s to oust Soviet Union from Afghanistan. These Jihadists did a wonderful job for the CIA in making the Soviets suffer an embarrassing defeat in Afghanistan. Invasion of Iraq and then Libya by America and West only helped create new space for the Jihadists to destabilize social structure in those societies. Of late there has been much criticism in the US and the West of the role played by Saudis in exporting jihad. One is at a loss to notice US trying to effect regime change in Syria through an alliance with Saudis employing the same wahhabi jihadists who are supposed to have disturbed world peace.
Pakistan army could be as guilty of exploiting jihadists for their goals as Americans or the West but no more.