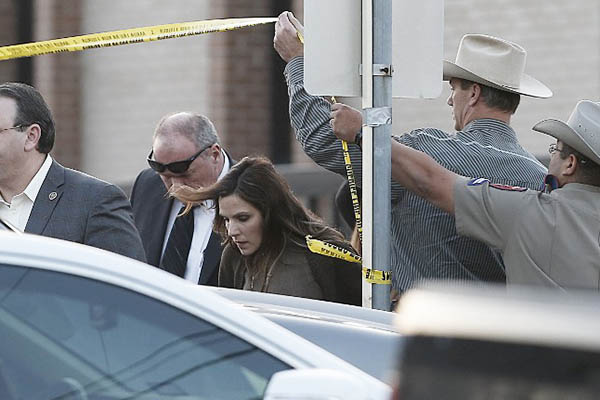 Former Marine Eddie Ray Routh’s claims of insanity were unanimously rejected by jury, which found him guilty of two murders.

A former Marine was sentenced Tuesday to life in prison without parole after being convicted of murdering the U.S. Navy Seal whose story inspired the blockbuster movie American Sniper.

After deliberating for less than three hours, jurors unanimously rejected claims from Eddie Ray Routh, 27, that he was not guilty on grounds of insanity when he killed famed sniper Chris Kyle and his friend Chad Littlefield at a Texas shooting range in February 2013. The two-week trial in Erath County attracted massive media attention across America. And it coincided with the release of Clint Eastwood’s controversial movie based on Kyle’s experiences in Iraq.

The jury of two men and 10 women found Routh guilty with a unanimous vote.

Erath County District Court Judge Jason Cason sentenced him to life in prison without the possibility of parole. It was a capital case, but prosecutors took the death penalty off the table before the trial started, the Washington Post reported.

Kyle and Littlefield were killed after Routh’s mother asked the Navy SEAL veteran to help her son with post-traumatic stress disorder, the Post said. They picked him up in Kyle’s pickup truck the day of the killings with plans to enjoy the shared hobby of shooting and offer some ways to help.

Kyle, a father of two, was shot six times with one of his own .45-caliber pistols, including a wound to the back that pierced his aorta and another to the jaw that caused a lethal spinal cord injury, the Post said. Littlefield, a father of one, was hit seven times, including four that would have been instantly fatal, according to court testimony.

Judy Littlefield, the mother of Chad Littlefield, made a brief statement late Tuesday after the verdict. “We have waited two years for God to give us justice on behalf of our son, and God has proved to be faithful,” she said. “We are so thrilled that we have the verdict that we have.”

Routh’s attorneys pleaded insanity and said their client was gripped by psychosis. Himself a former Marine, Routh also said he suffered from post-traumatic stress disorder. After the shootings on Feb. 2, 2013, Routh took Kyle’s truck and was later arrested at the home of his sister. He allegedly confessed to the killings after complaining that “people were sucking his soul and that he could smell the pigs.”

During the trial, jurors heard how Kyle and Littlefield knew something was badly wrong minutes before Routh opened fire. “This dude is straight up nuts,” Kyle wrote to Littlefield in an alarmed text message. “He’s right behind me, watch my six,” replied his friend, using military jargon for “watch my back.”

Jurors also heard emotional testimony from Kyle’s widow Taya, who sobbed as she recounted their life together. Lawyers had questioned whether Routh could receive a fair trial in the small town, given the success of American Sniper and the widely held view of Kyle as a hero.

American Sniper has so far earned more than $320 million to become the highest grossing war film in history. Critics claim it presents a simplistic, black-and-white view of the Iraq conflict, and glosses over Kyle’s references to Iraqis in his memoir as “savages.”