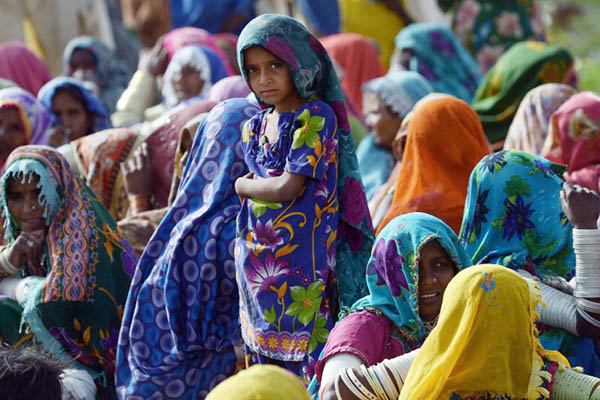 Observers claim lack of political will, corruption will likely result in a repeat of the health epidemic.

As the death toll from the latest outbreak of poverty-driven diseases in the Thar Desert nears 100 children, experts are warning that corruption and a dysfunctional political system make a repeat of the disaster almost inevitable.

The desert region in Tharparkar, one of Pakistan’s poorest districts, spreads over nearly 20,000 square kilometers in the country’s southeast and is home to some 1.3 million people, including a large population of minority Hindus.

Between March 2013 and February this year, rainfall was 30 percent below usual, according to government data, with the worst-hit towns of Diplo, Chacro and Islamkot barely touched by a drop of water for months.

Asif Ikram, the second most senior administration official in the district, said on Thursday that the death toll from diseases such as pneumonia and meningitis since Dec. 1 had risen to 161 people, including 97 children.

Life in the desert is closely tied to rain-dependent crops and animals, with farmers relying on beans, wheat, and sesame seeds for survival, bartering surplus in exchange for livestock. The drought is not the only reason for the recent deaths—observers say they have come about as a result of endemic poverty, exacerbated by the drought and an outbreak of disease killing livestock.

Authorities have been busy dispensing food aid and sending medics to attend to the sick following visits by Prime Minister Nawaz Sharif and Bilawal Bhutto Zardari, who leads the Pakistan Peoples Party which rules the province.

But observers say the relief work fails to address the root causes of such disasters and warn they are likely to be repeated. A drought in the desert in 2000 killed 90 percent of the livestock.

Zafar Junejo, chief executive of Thardeep Rural Development Program (TRDP), says the region has long been ignored by Karachi because it is not considered an important constituency politically. According to the last census, Hindus make up 40 percent of the district’s population, unlike most of Pakistan, which is overwhelmingly Muslim, and Junejo said the authorities have little concern for the suffering of minority communities.

Javed Jabbar, founder of the Banh Beli non-governmental organization that works in the area, added: “When you have Karachi with 18 million people, Tharparkar is relatively less important from a political radar point of view.”

Jabbar, a former federal information minister, added that the district has fallen victim to “a failure to enforce accountability due to considerations of partisanship” that has afflicted the province for years. He cited the case of five doctors in the province who were able to keep their jobs despite being absent from their posts for years, because of connections to political patrons.

Residents and activists say the effects of drought can be mitigated by global lessons in dry regions, such as the conservation of rainwater. “Rainwater harvesting should be made mandatory all over the country and especially in this part,” said Abid Channa, a local social activist, complaining of the district’s lack of reservoirs despite decades of disasters.

Jairam Das, a 49-year livestock farmer who lost 10 sheep and two goats to the recent outbreak of animal disease, said he and other villagers were envious of Indian villages just a few kilometers away across the border. “In the bordering town of India there is greenery all around as their government has spread a network of irrigation and piped drinking water,” Das said. “We have a similar climate but the lack of water is a major hurdle,” he added.

On the Indian side of the border, the 400-kilometer Indira Gandhi canal through the Thar Desert in the state of Rajasthan is a lifeline for isolated communities and farmers who use the water for irrigation for crops and drinking water when needed.

Jabbar, the ex-minister, added more planning was needed ahead of droughts. “When you see signs in a particular year, you move supplies of fodder and nutritional supplements in advance of the drought not after it,” he said.

One positive he noted was the extensive television coverage the disaster had received, thanks to the growth of Pakistan’s media, and the pressure it had applied on government to no longer ignore the area.