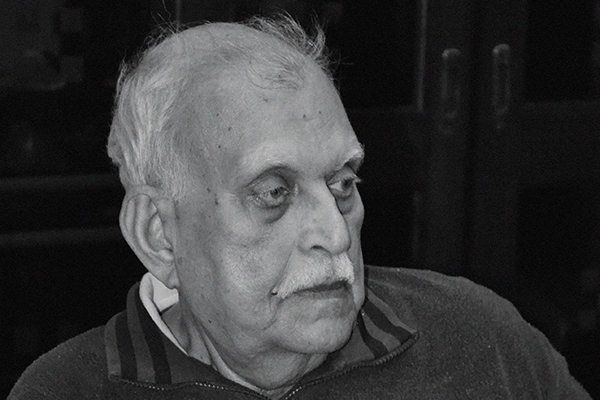 In conversation with Jamil Ahmad.

[dropcap]I[/dropcap]t took some 40 years for his collection of short stories, The Wandering Falcon, drawn from his experiences in Pakistan’s tribal areas to make it to print. The book was short-listed for the Man Asian Prize in 2011 and long-listed for the DSC South Asian Prize last year. We spoke with Jamil Ahmad, a former Pakistani civil servant, about his unexpected second career and more. Excerpts:

How and when did you begin writing fiction?

During my time in political service, there was a brief spell—a couple of years—when I had some time to spare. Somehow, it struck me to start writing. I had indulged in a bit of writing earlier, in college, but nothing was ever published, or even offered for publication. At first I dabbled in poetry. When I showed it to my wife, she immediately shot it down. She said, “Look, this is just rubbish! Why don’t you write about something you are familiar with, such as the tribal areas?” It took 40 years and a set of accidents for the short stories to be published.

What makes one a writer, and how do you view this second career of yours?

I wouldn’t know; I wouldn’t even call myself a writer. Writing one book does not make someone a writer. I would not call this a second career. I am tempted occasionally to continue writing or have a second look at what I had inked earlier.

How did these stories come to you?

A story comes about as fragments; little dots that suddenly start connecting and converge to form a picture. The character of the guide, for example, came about while I was serving as political agent in Khyber agency. One day the cultural attaché from the German Embassy in Islamabad came to see me with a small, personal request. He needed my help obtaining a sack full of earth from Tirah. Intrigued, I asked him why he wanted it. As it turned out, he had taken Pashtu lessons in Germany from an Afridi, who had made him promise to someday collect a sack full of earth from Tirah and scatter it on his grave in Germany.

Why did you choose to write about the tribal areas?

I have always felt, rightly or wrongly, that the tribe is a basic building block of communities. Each one of us was a tribesman, whether it was 10 or 20 generations ago. It has its defects but it remains the least inequitable and unjust system. You can’t compare the tribes in FATA to consumer-capitalist societies. They have survived for all these years despite always being treated as potential adversaries.

Authors often describe the process of writing as lonely and exhausting. Would you agree?

Writing was never exhausting for me. The choice was between writing, playing scrabble, or quarreling with my wife. The manuscript was completed in two years, around 1973, after which it hibernated for a long time.

You had to dig out this manuscript and edit it for publication. How difficult was this process?

The only change I made, well, was after I met with the U.S. deputy ambassador in Istanbul who told me that for him the only person who has been successful with short stories is James A. Michener in his Tales of the South Pacific. He said there has to be a connecting link, and that’s how Tor Baz came about. There were quite a few suggestions thrown at me by the editors—for instance, to convert it into nonfiction and make the characters “stronger.” If you ask me, strong characters only exist in comic books.

‘The choice was between writing, playing scrabble, or quarreling with my wife.’

What do you have to have when you’re writing?

Is it necessary to write every day to become a writer?

These days I am not writing, but when I was, I was writing every day for hours at a stretch. I never got writer’s block. There were never any blank periods, except when I would interrupt my writing to go play cards.

Do you prefer longhand to typing?

[When I wrote this] there were no computers. I wrote all of it in longhand. When my wife came to Lahore for our wedding, she had carried with her a manual typewriter with a German keyboard. So I was writing by hand and she would be typing along.

What influenced these stories?

Subconsciously, I was carrying a kitbag full of memories, sights, sounds, faces, and expressions—the whole spectrum of human emotions. I did not make any notes. I was meeting about 200 people a week during my service. These people would walk miles to come to see me, so I could never turn anyone away.

How do you feel about the accolades you’ve accrued?

The accolades are a bit embarrassing. I have received less than my share of criticism. Once in a while, when I get a critical piece, I keep it on the table next to me. It helps me stay grounded.

What are you working on now?

Someone did suggest to me that I should put down the small fragments of memory I have about the tribal areas. One thing that I hate and have always hated is writing an autobiography. The use of first person singular is odious. I will never pen that. My wife is my mother hen. She has been collecting all my papers. Recently, she dumped a bag full of them and demanded that I go through the load and see if I can make something out of it.

Could you foresee then what is happening now in the tribal areas?

I left service in 1982. This is a very vast topic, and the streets today are full of Afghan specialists. I don’t want to add to the noise pollution.

Were you ever wary of the people you had to deal with in the tribal areas?

Never. I was worried about what was going to happen when the Soviet invasion took place. In 1979, Time put on one of its covers a hammer and sickle fighting it out with a cross. It was their game plan. The Americans were sucking in the Soviets deliberately.

What struck you the most about Baloch culture?

Their code of honor. I once caught a man who had stolen our office telegraph so he could sell the copper in the market. I admonished him and told him that he will have to serve a sentence of 10 days in a nearby prison. Since I had to leave for Iran immediately, I gave him a piece of paper with the sentence on it and asked him if he will report to the jail with it. He gave me his word that he would. And would you believe it, he reported to the authorities. That was their adherence to honesty. That was the Baloch.