Home Culture The Actor and the Drug Lord

The Actor and the Drug Lord 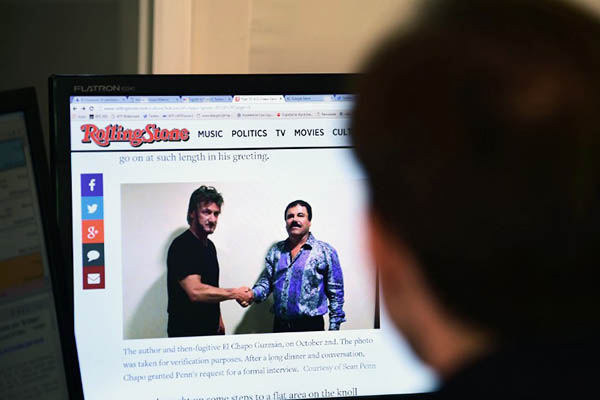 In a cloak-and-dagger plot fit for a Hollywood movie, U.S. actor Sean Penn met secretly in the Mexican jungle in October with Joaquin “El Chapo” Guzman, conducting an explosive interview released a day after the drug kingpin’s recapture.

The astonishing story of Penn’s encounter with the world’s most wanted criminal was published by Rolling Stone magazine on Saturday, the day after Guzman’s arrest following a deadly military raid in Los Mochis, a coastal city in the drug lord’s native northwestern state of Sinaloa.

After months of secret negotiations to establish contact and win the fugitive’s trust, Penn was granted a “seven-hour sit-down”—presented as the capo’s first-ever interview outside an interrogation room—followed up in subsequent phone and video conversations.

“Not since Osama bin Laden has the pursuit of a fugitive so occupied the public imagination,” Penn wrote in a Rolling Stone article recounting the extraordinary sequence of events.

A social activist and fierce critic of the U.S. war on drugs, Penn—who had help from Mexican actress Kate del Castillo in arranging the meeting—said he felt compelled to seek El Chapo out of a sense of what he called American complicity in the drug violence plaguing its southern neighbors.

“As an American citizen, I’m drawn to explore what may be inconsistent with the portrayals our government and media brand upon their declared enemies,” he said.

When they finally met in a Mexican jungle clearing, he said the 58-year-old Guzman gave him a brotherly embrace before introducing him to his crew. “He pulls me into a ‘compadre’ hug, looks me in the eyes and speaks a lengthy greeting in Spanish too fast for my ears,” Penn said.

Guzman had been on the run since escaping through a tunnel from the Altiplano maximum-security prison in July after just 17 months behind bars.

Rolling Stone published a picture showing Penn in a black shirt shaking hands with the cartel leader, dated Oct. 2. According to the magazine, Penn and del Castillo were surrounded at the time by more than 100 cartel soldiers.

Guzman agreed to a filmed interview at a later date, but since a face-to-face meeting proved impossible, the drug lord answered Penn’s questions via video recordings without the Hollywood star present.

In a two-minute clip posted online by Rolling Stone, Guzman appears clean-shaven in a blue collared shirt. “It’s a reality that drugs destroy,” Guzman says in Spanish. “Unfortunately, as I said, where I grew up there was no other way and there still isn’t a way to survive.”

Guzman denied responsibility for drug addiction and the prevalence of narcotics, dismissing such accusations “false.”

“The day I don’t exist, it’s not going to decrease in any way at all,” he said of the drug trade.

In a stunning admission of his criminal enterprise, Guzman told Penn over sips of tequila that “I supply more heroin, methamphetamine, cocaine and marijuana than anybody else in the world,” the actor said. “I have a fleet of submarines, airplanes, trucks and boats,” Guzman said.

Penn described Guzman as “entirely unapologetic.” The drug capo also said he did not consider himself a violent person. “Look, all I do is defend myself, nothing more. But do I start trouble? Never,” he told Penn.

Mexican Attorney General Arely Gomez said Friday that Guzman met with unnamed actors and producers hoping to make a biopic about himself, but gave no further details.

According to Penn, Guzman received several movie offers while in prison, but instead he chose to make his own.

Penn said he believed prior to the meeting his movements were likely being tracked by Mexican and U.S. authorities, and a Mexican federal official told AFP on condition of anonymity that the meeting helped lead to Guzman’s recapture. The actor also said he entered into the interview project fully aware of the dangers involved.

“I’d seen plenty of video and graphic photography of those beheaded, exploded, dismembered or bullet-riddled innocents, activists, courageous journalists and cartel enemies alike,” Penn wrote. Nevertheless he was emboldened to meet El Chapo because of the drug lord’s “unique” reputation.

“Unlike many of his counterparts who engage in gratuitous kidnapping and murder, El Chapo is a businessman first, and only resorts to violence when he deems it advantageous to himself or his business interests,” Penn wrote.

Mexican authorities have said they will begin the process of extraditing Guzman to the United States, a reversal from President Enrique Pena Nieto’s refusal to send him across the border.

In the video interview, Guzman is asked whether Mexican authorities want to kill him instead of taking him alive. “No, I think that if they find me they will arrest me. Of course,” Guzman said.