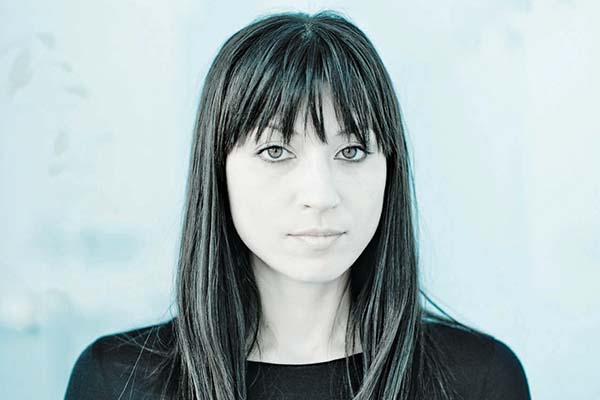 A descendent of swordsmiths turns metal into art.

[dropcap]M[/dropcap]ove over, Man of Steel. There’s a new superhero in the city.

Miya Ando is disarmingly petite, wears all black, goggles, and steel-toed boot. She spends seven days a week sawing, sanding, lacquering, and dunking metals in acid. Her ancestors were swordsmiths. Her mission: to embrace the alchemy of metal, to manipulate steel and aluminum into forms beyond recognition, and to create deceptively simple post-minimalist art.

It’s the weekend before her first solo exhibition opens at New York’s Sundaram Tagore Gallery—a major turning point in any emerging artist’s career. Yet Ando, who’s in her 30s, remains unruffled. She’s working in her studio, a mad scientist’s dream on the water in Brooklyn’s DUMBO neighborhood. Eight-foot-long sheets of aluminum line the walls, and instruments are strewn everywhere: saws, torches, and a collection of tools with pink handles.

“Just because I work with metal doesn’t make me an ogre,” Ando says. She’s packing her very heavy metal paintings—anodized and dyed aluminum and steel, really—for the show, for which she has even created a mini diorama of the gallery.

One of her most high-profile works came about by kismet. After a sculpture of hers caught the eye of the man in charge of the 9/11 Tribute Center, he recommended her work to the 9/11 London Project Foundation. In a hangar at JFK airport in 2010, she chose a piece of scrap metal that had been part of the World Trade Center. To commemorate the London victims of 9/11, she sanded and polished the 28-foot, 8,000-pound section for two years until something that once stood so tall could again reflect the sky. “I wanted to turn it into an object that redirected light back into the world,” she says.

That was nearly three years ago, and Ando has been working nonstop since. Her rigorous schedule is paying off: she has sold every piece she ever created (prices range from $2,000 to $30,000), and her ascent is being chronicled by a documentary filmmaker who has followed her for two years and will continue to do so for another four.

Born in California to a Russian-American father and Japanese mother, Ando spent her first six years living in Okayama, Japan, in a Buddhist temple run by her family where her grandfather was the head priest, before moving to a 25-acre forest in Santa Cruz, California, for a rural, coastal upbringing. She returned to Japan every summer. The quiet of the temple and luminescence of life under the redwoods left her with memories so strong that she doesn’t need a view to be inspired, she says from her dark, industrial artist’s lair: “I could work in a cave, and I’d probably make the same thing.” After graduating magna cum laude with a degree in East Asian studies from UC Berkeley, where she completed a welding course on the side, she enrolled at Yale to focus on Buddhist iconography. There, Ando realized she wanted to make, not analyze, art. She became an apprentice for a master metalsmith in Japan for six months. She took her newfound skills to San Francisco, where lack of studio space couldn’t dissuade her—she just threw a heat-resistant mat on the floor and heated up a little blowtorch on her stove.

A woman working in metal is rare, but the path somehow seemed inevitable for Ando, whose ancestors were master swordsmiths of Japan’s Bizen province, a historical center of swordsmithing. “As a person who’s of mixed heritage, it was always a way for me to connect with that part of my family,” she says. A few years ago even her great-uncle admitted, “Wow, you really are an Ando. We always knew there was steel in our blood, but we had no idea it was going to be in our littlest girl.” Her goal, seen in the new exhibition, Mujo (Impermanence), is to take something permanent like steel, “a symbol of strength,” Ando says, and transform it into something that looks ethereal. The results are mirrored abstract metal paintings that dance with light in subtle ways.

The transformation of metal may be a centuries-old trade, yet Ando is pushing it into the modern world with her technique of anodizing and dyeing aluminum. The minimalist artist Donald Judd constructed anodized, dyed boxes, but she’s the first to apply multiple colors by hand. “It looks like watercolor,” she says, “but it’s permanently dyed, and the metal is hard as sapphire.” Artists she admires include Leo Villareal, who’s lighting up San Francisco’s Bay Bridge; Anish Kapoor; Sarah Sze; Lee Ufan, a Korean artist whose work has been influential in Japan; and James Turrell, who has a massive installation coming up at the Guggenheim in New York.

“On the weekend I like to call it my hobby,” she says of her work. She makes time for her boyfriend of three years, the artist Shelter Serra, known for his silicone sculptures of famous objects and collaboration last year with Helmut Lang. (The last name is familiar for a reason; his uncle is sculptor Richard Serra.) After the gallery opening, she’s heading to Denmark to create a hand-dyed set of 20 limited-edition aluminum speakers for design-savvy stereo maker Bang & Olufsen.

But before she flies off, and even before Chelsea’s art elite flock to her new show, Ando is considering leaving her studio on a Sunday afternoon, perhaps even engaging in a mortal activity. Her boyfriend has stopped by. “How about a movie?” she asks. “I hear everyone’s buzzing about this new Superman.”