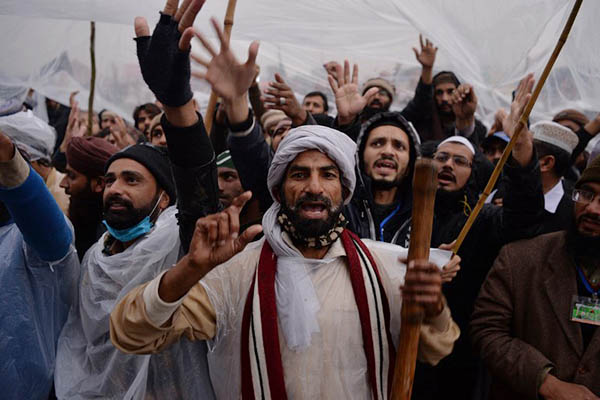 A mob of bedraggled citizens from the poor classes of Punjab have laid siege to the cities of Rawalpindi and Islamabad, blocking all daily traffic between them. The Pakistan Muslim League (Nawaz) government of Prime Minister Shahid Khaqan Abbasi is wary of hard-handling around 4,000 individuals sprawling across roads because of the consequences of such an act—despite orders from the local court.

The organization behind the move to besiege the government is Tehreek Labbaik Ya Rasool Allah led by Khadim Hussain Rizvi of rough speech who has learned his lessons of defiance from many earlier such blockades that have succeeded in toppling Nawaz Sharif from power. The objective is to empower Barelvi Islam, characterized by the culture of devotion to Islam’s Prophet and tolerance of sects, which is not the strongpoint of the dominant Deobandi school of thought now possessing muscle because of their selection as proxy mujahideen with not a little help from Saudi Arabia and other Arab patrons of the Gulf.

The Barelvis took their disempowerment through Deobandi jihad lying down despite their numerical majority; but they were aroused into rebellion by the swagger of the Deobandis who often grabbed their mosques with state connivance. Then something happened to the Barelvis in Karachi’s terrorist meltingpot and they emerged as the Sunni Tehreek ready to punch back. The traditional cult of devotion to Islam’s Prophet helped them focus on the blasphemy law and the Ahmadi community already apostatized by Pakistan’s Constitution. Sunni Tehreek’s assault on Islamabad found the government in the familiar posture of prostration. TLYRA is following suit.

Rizvi and his TLYRA want to grab some power to be able to attract all sorts of pious and impious funding, and lift Rizvi to the undeclared pantheon of Pakistan’s religious underworld. Unfortunately, Pakistan is too politically unstable to think clearly about what is happening and is neglecting to come together politically to stop the rot at the heart of the state of Pakistan.