The Battle for London 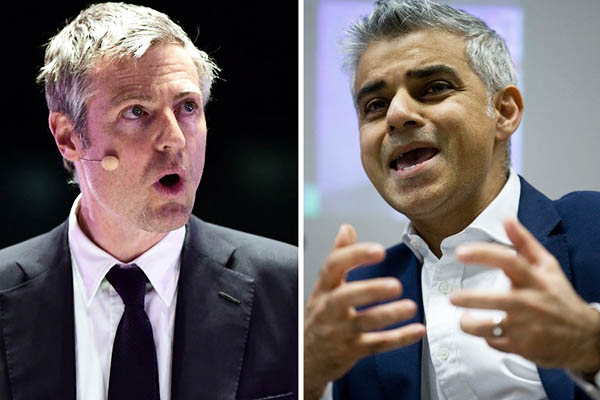 Londoners choose their new mayor on Thursday after a straight fight between rival candidates Zac Goldsmith and Sadiq Khan dominated by negative campaigning.

In the contest to replace the charismatic Boris Johnson in charge of the British capital, polls put Labour candidate Khan comfortably ahead of his Conservative rival as they enter the final straight. The two main contenders are cut from different cloth.

Environmentalist Goldsmith, 41, represents west London’s affluent Richmond Park in parliament. He is a son of the late tycoon financier James Goldsmith, who left £1.2 billion in trust for his family.

Khan, 45, meanwhile, is the son of a Pakistani immigrant bus driver who grew up to be a human rights lawyer and government minister. He is the M.P. for Tooting in south London, where he was born and raised, and which has a large population with Asian roots.

“Sadiq is on course for victory, built on his party’s core vote, while Zac Goldsmith is left with a mountain to climb,” said Laurence Janta-Lipinski from pollsters YouGov.

The latest survey puts Khan on 49 percent support and Goldsmith on 34 percent. Of the 12 candidates, second preference votes for the top two are added on to determine the winner. Survation polled 1,010 adults by telephone between April 21 and 25.

If Khan wins, he will become the first Muslim mayor of London or of any major European capital—a fact not lost on Goldsmith’s campaign as he plays catch-up.

Goldsmith has spent weeks trying to demonstrate links between Khan and Islamic extremists, a theme Conservative Prime Minister David Cameron has echoed in a battle that has got increasingly dirty. Goldsmith has described Khan as “radical and divisive,” while the Labour candidate has branded his rival’s campaign as “bleak and desperate.”

“Khan is clearly a modern, progressive Muslim,” said Professor Tony Travers, a local politics expert at the London School of Economics University. Rosamund Urwin, a columnist in the London Evening Standard newspaper, said Goldsmith’s “nasty tactics” would not impress most people in the city.

“Goldsmith’s campaign doesn’t seem to chime with London. This is a city that wants solutions, not smears; a mayor who unites rather than divides,” she wrote.

London’s population has swelled by 900,000 to 8.6 million since Conservative Johnson was first elected in 2008 and beneath all the election rancor, the most pressing issues for Londoners are sky-high housing costs and the strained transport system.

Londoners are not alone in going to the polls on May 5.

Scotland, Wales and Northern Ireland elect new national assemblies, while there are elections in 124 English local authorities. The round of elections is closely followed by the EU membership referendum on June 23, a major test of authority for Conservative Prime Minister David Cameron, who wants Britain to stay in the European Union.

They are also a first electoral test for opposition Labour leader Jeremy Corbyn. The veteran socialist, who swept to the leadership in September, has the overwhelming backing of grassroots members but many of the center-left party’s M.P.s do not share the enthusiasm.

Despite Corbyn’s mandate, Labour plotters might view poor results as “a good time… to stage a coup,” said The Spectator, a conservative political magazine.

In Scotland, First Minister Nicola Sturgeon’s pro-independence Scottish National Party is looking to tighten its stranglehold on power as it seeks to build support for another referendum on breaking free from Britain following the failure of 2014.

The Conservatives are hoping to pile on the agony for Labour in their former fiefdom by replacing them as Scotland’s main opposition.

In Wales, polls put Labour on course to retain their dominance. The Conservatives and nationalists Plaid Cymru are vying for second place, with the anti-EU U.K. Independence Party seeking to win its first seats.

In Northern Ireland, where power is shared between parties, the Democratic Unionists (pro-British Protestant conservatives) remain ahead of Sinn Fein (Catholic socialist Irish Republicans) in the latest polls.