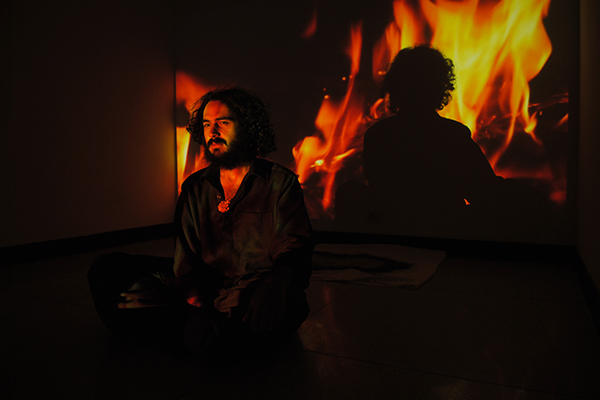 “There is an overall system that is oppressing us, and we have to change that before anything else,” says Zulfikar Ali Bhutto, explaining his latest exhibition, The Shrine, which ran at Gallery 39K, Lahore, from Jan. 12 to 16.

The photos and video installations that make up The Shrine focus on the Hindu community in Bhutto’s native province of Sindh, home to 93 percent of Pakistan’s 6.84-million-strong Hindu population and which is ruled by the Pakistan Peoples Party, which Bhutto’s grandfather founded. The effort with The Shrine, says Bhutto, is to mainstream Pakistani Hindus by emphasizing all that they share in common with Pakistani Muslims, including reverence for several spiritual figures like the 10th-century Sufi saint Lal Shahbaz Qalandar.

“Especially when you’re in the Pakistani school system, you’re fed all kinds of things that aren’t true,” says Bhutto. “People created untrue divisions between Hindus and Muslims because of the tensions between Hindu-majority India and Muslim-majority Pakistan. [Hinduism’s] link with the land is ancient and strong. We’ve covered up our history, the history of the Indus Valley civilization, because a large part of it is Hindu. This history is something we keep disregarding.”

The work is also informed by Bhutto’s own history. His great-grandmother converted from Hinduism to Islam so she could marry Sir Shah Nawaz Bhutto. Irked by the state-sanctioned amnesia and divisions, Zulfikar Ali Bhutto travelled across Sindh chronicling Hindu temples in their various states of disrepair, exploring the lives of Pakistan’s impoverished and increasingly marginalized Hindus. The experience, he says, was “incredible,” one that sustained him spiritually and artistically but anguished him politically.

“Hindu-majority areas like Tharparkar, Mithi, and Umerkot have all been robbed of their agency, especially with the death of politicians like Rana Chandra Singh,” he says, referring to the late PPP stalwart and former federal minister who was Hindu. “Pakistani Hindus don’t have a voice because they haven’t been given a voice.” 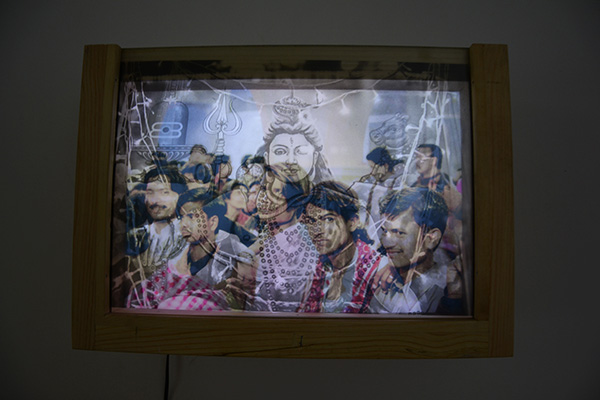 Last year’s famine in Thar claimed the lives of several hundred infants, most of them from Hindu families. Bhutto blames the humanitarian crisis on the lack of political autonomy. Pakistani Hindus “are constantly excluded from our ideology,” he says. A graduate student of art history at the University of Edinburgh at the time, Bhutto put together a 15-artist silent auction for Thar. The money they raised funded a medical camp that treated 1,000 people and the installation of water pumps and wells. Months later, when Thar plunged into an avoidable crisis again, Bhutto decided he would set up a charity. “I can’t just keep making an exhibition every time famine strikes,” he says, “something sustainable has to happen.”

Marginalization resonates with the young Bhutto, whose father, Mir Murtaza Bhutto, was politically marginalized, first by Gen. Zia-ul-Haq and later by his older sister, Benazir Bhutto. Like The Shrine, Bhutto’s other works also feature the marginalized. He’s working with the Gender Interactive Alliance Pakistan exploring the lives of Karachi’s transgendered, striving to portray them as they see themselves, not through the caricaturizing lens of the roughshod majority. “It was important to represent them in the light of family, not as people who beg on the street or who engage in activities people often attribute to them,” he says.

Body-Nation, another upcoming series is more ambitious. It investigates “how we imagine and build bodies and nations and how these relate,” he says, adding that his goal is to square the idealizations, national and Western, of body and nation with the realities of Pakistan. During the Raj, the British oversimplified the diversity of the Indian subcontinent’s coexistent cultures for their convenience. The resulting divisions, says Bhutto, were dangerous: “To rip apart countries was to rip apart people from each other.” But these divisions persist, and much of Bhutto’s work aims at reconciling such differences that were created for political ends.

In his Twitter bio, the Damascus-born and U.S.-based Bhutto describes himself as an “artist, photographer, journalist” who is “forever working for a better Pakistan.” He wants to move back, but doesn’t know when. His mother, politician Ghinwa Bhutto, and siblings, author Fatima Bhutto and 10-year-old Mir Ali, an aspiring artist, continue to live in Karachi. Zulfikar Ali Bhutto is not interested in the family business of politics, which claimed his father, who was assassinated in Karachi in 1996 at the age of 42. He believes the best route to “a better Pakistan,” and for him to connect with the people, is through his art of the marginalized.

Bhutto’s work will be featured at the third annual Lahore Literary Festival in February. For more information on Bhutto, visit his website. He tweets as @bhuttozulfikar.

these activities are not for Bhuttos ….

he is not bhuto

Z. A. Bhutto II who’s namesake happened to be the Oxford-educated President and Prime Minister of Pakistan martyred by the same General he appointed after a bloodless coup was in turn was the son of the wealthiest feudal lord in Sindh, who pre-partition served as the Prime Minister of Junadagh and was Knighted by the King-Emperor. This is a rather exhalted family history and clearly a lot to live up to but sooner or later Jr. is going to have to do put an end to this hippie thing and became a man of his own. It is ofcourse natural to rebel against ones upbringing (as Jr. has quite obviously done) but the fact remains, you are a Bhutto and are expected to act like one, please come to that realization and put an end to this Ravi Shankar psychedelic non sense as soon as possible I would much rather be dealing with Z. A. Bhutto Jr. than Bilawal Ali Zardari…I mean who the hell is he? he is a closet homosexual who probably does not even know how to tie his own shoes…I am not homophobic as my choice of words might suggest but if that truly is the case than he should set an example for the homosexuals of Pakistan and come out of the closet. Nevertheless, I have faith in Jr. I would much rather see him in a tailored suit with a clean shave smoking a Cuban cigar telling the United States to piss off than Bilawal struggling to speak elementary Urdu or maybe I am just feeling nostalgic about Z. A. Bhutto after seeing a legitimate patrilineal offspring and that too named after the man?…my goodness I just miss the good old days…better times…simpler times…

Well as it turns out today, 2 of the 3 Bhutto family male heirs, incl Zulfi jr. are definitely gay. What about Shahmir Hussain Bhutto?