Home Latest News ‘The Beginning of the End’

‘The Beginning of the End’ 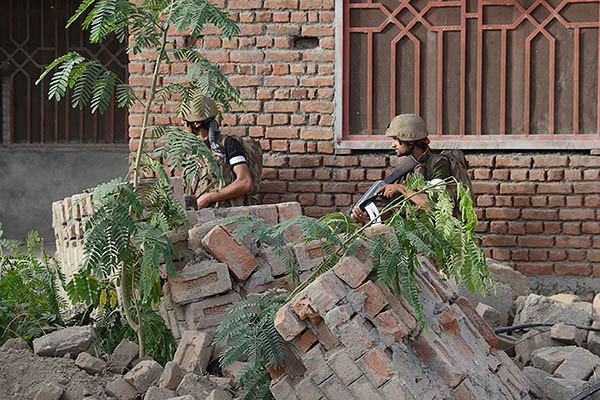 Military spokesman tells journalists Operation Zarb-e-Azb has no timeframe, will target all militants regardless of affiliation.

Operation Zarb-e-Azb, the ongoing military offensive against militants in the North Waziristan tribal agency, is the beginning of the end of terrorism in Pakistan, said Maj. Gen. Asim Saleem Bajwa during a press briefing on Tuesday.

The military spokesman, accompanied by information minister Pervaiz Rashid and Lt. Gen. (retd.) Abdul Qadir Baloch, the minister for States and Frontier Regions, said North Waziristan had become a hub for terrorists in Pakistan. “No discrimination has been made in the current operation,” he said, “It doesn’t matter if the militants are Haqqanis or not.”

Bajwa told journalists Islamabad had informed Kabul about militants on Afghan soil at both diplomatic and military levels. “The government has informed Afghanistan … about the presence and activities of Tehreek-e-Taliban Pakistan chief Mullah Fazlullah,” he said, adding, “We have asked them to arrest and repatriate Fazlullah.” The Afghan government has also been asked to act against any terrorists who cross the porous border during the military operation. “The U.S. and [NATO-led] International Security Assistance Force are also monitoring the situation,” he said. However, the ISPR director general said the majority of hardcore terrorists were still hiding in North Waziristan. “We will eliminate every single terrorist and their sanctuaries,” he added.

Since the launch of the operation on June 15, said the ISPR spokesman, 376 terrorists have been killed, 19 have surrendered, and 61 militant hideouts have been destroyed. According to Bajwa, the military purposely took two weeks to launch the ground offensive to allow civilians to seek safety. “The military wants less collateral damage,” he said. “No human rights violation occurred.”

The military spokesman also updated journalists on militant assets recovered by the armed forces. “During the ground operation in Miranshah, security forces have found an improvised explosive devices (IEDs) factory with 225 explosive-filled cylinders of 80 to 100 kilograms each; 150 empty cylinders; 400 pallets with nuts and bolts; 700 explosive-filled pipes; training literature; a physical training facility; 10 anti-tank mines; and other facilities for cutting and welding pipes,” he said, admitting that the materials had been recovered despite resistance from the terrorists.

Bajwa also clarified that U.S. drones were not helping Pakistan in North Waziristan. “The operation is being carried out solely by Pakistan, and the PAF is capable of striking terrorist hideouts accurately,” he added. He said anyone with information about terrorist activity in any city could call 1135 and convey their concerns to the relevant authorities. To a question, Bajwa said he could not give any timeframe for the end to the operation.

Minister Baloch, meanwhile, told journalists that around half a million displaced people had been registered and provided rent allowance, food, and a special Ramzan package. “So far, 221,000 people have been immunized against polio voluntarily as well,” he added. Referring to media reports claiming a mass exodus of Pakistanis to Afghanistan to escape the military operation, Bajwa added that of the 400 families that had left for Afghanistan ahead of the operation, a majority had come back via Kurram Agency and were now based in Hangu.

Defending the delay in launching the military operation, Baloch said that the government had responded to the public reaction. “At least 195 security forces personnel were killed in 20 incidents between Jan. 29 and June 2—while the government was negotiating peace with the TTP,” he said. “No one can bear such casualties. However, there was a popular demand from the people to ‘give peace a chance.’”