Home Culture The Best of Lahore

The Best of Lahore 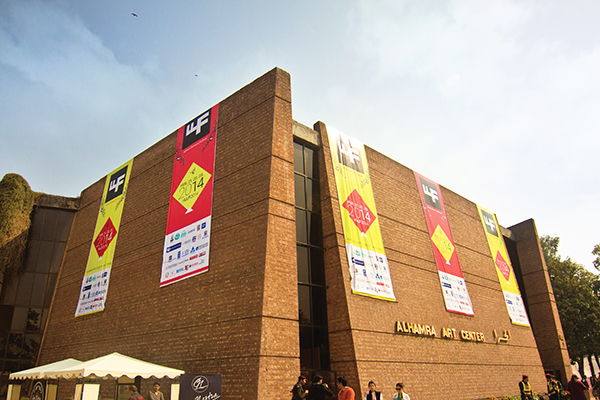 [dropcap]S[/dropcap]pring always began with Lahore. Every February, the cultural capital of Pakistan would host heady celebrations across the cityscape that melted away traditional divides and united this old city of 11 million through the colorful kite-flying ritual, and economic bonanza, of Basant. The last time Lahore held Basant was seven years ago. Disapproved by the rightwing as a pagan ceremony and by conservative courts as a public danger, Basant remains banned.

So the organizers of the Lahore Literary Festival were hardly surprised when they discovered that the city’s once-thriving kite-making industry simply no longer exists. With kites depicted on the banners adorning the Alhamra Art Center’s façade, Basant and its spirit were very much at the heart of last month’s LLF.

“It was a naughty touch,” says Salima Hashmi, an artist who briefly served as the Punjab province’s minister of health and education last year. She was also one of the 100-plus delegates who spoke at the three-day LLF, which concluded Feb. 23. With some 50,000 attending the free public event, LLF is now Lahore’s largest annual cultural celebration.

Its rapturous success—with the four halls of the Alhamra heaving at full capacity and beyond most hours—was a testament both to the public’s yearning for discourse unfiltered by the state and their defiance of threats to Pakistan’s arts and culture at a time when the country is stumbling to negotiate some sort of peace with the Pakistani Taliban.

On social media, participants and observers paid tribute to the independent festival, whose first edition debuted only last year. “Standing-room only,” tweeted Cynthia P. Schneider, a former U.S. ambassador and Georgetown professor, “10s of thousands 2 hear authors, thinkers, artists, musicians. Wish West media [would] cover this side of Pakistan.” Posted Saba Imtiaz, author of Karachi, You’re Killing Me!: “Very excited to finally go to a panel tomorrow at [LLF] and not stare mournfully at the closed doors because the halls are packed!” Salman Akram Raja, a top Pakistani lawyer, wrote: “What does the amazing turnout at the Lahore Lit Festival mean? That [people are] starved of serious content in the public space they inhabit?”

Reclaiming public space was also the goal of the Sindh Festival, which debuted ahead of this year’s LLF. Bilawal Bhutto Zardari, son of the assassinated former premier Benazir Bhutto, told Newsweek he launched that festival “to help fight for the societal space that has been ceded to the extremists.” Despite threats from militants, the eclectic, half-month, multicity festival went off smoothly. (Zardari’s aunt Sanam Bhutto, who lives in London, ended her 25-year self-exile from Lahore to attend the LLF.)

“Don’t be afraid to be with us because we’re not afraid to be with you,” said Ahmed Rashid, bestselling author of Taliban and one of the organizers, at LLF’s opening ceremony. Lahore heeded his words. When the special video message from Malala Yousafzai—Pakistan’s young education activist attacked by the Taliban and who now lives in the U.K.—opened the panel discussion on Lahore and literature, cheers and applause from the hall full of school and college students drowned out her words. “It’s wonderful to hear about the festival,” she said. “This is necessary in Pakistan and especially important for children so they take interest in reading books. I am very sorry that I couldn’t be there … I hope one day I may join you all.”

LLF featured writers, artists, journalists and opinion leaders—among them, Vali Nasr, Vikram Seth, Shahzia Sikander, Rashid Rana, Intizar Hussain, Mohsin Hamid, K. Anis Ahmed, Ayesha Jalal, and Shobhaa De. There was a Kathak dance performance; and a jazz concert from Sachal Music, the subject of an upcoming documentary by Pakistan’s only Oscar winner, Sharmeen Obaid-Chinoy, who filmed the LLF concert that harked back to Lahore’s brighter past, where such concerts were commonplace and deeply popular. There were also art exhibitions and impromptu concerts on the green acreage of the Alhamra.

LLF’s significance was duly noted by organizers of other such festivals. “The Lahore Literary Festival is much more important than other festivals in other countries,” says Ulrich Schreiber, director of the Berlin International Literature Festival, “because it opens the minds and hearts for democracy and freedom under these hard and difficult circumstances in an efficient way. This was one of the best festivals I have attended so far.”

LLF founder Razi Ahmed believes Lahore has taken “ownership” of the festival. “This is an event that Lahore has welcomed with open arms,” he says. “The city has taken ownership of this enterprise, and this is demonstrated not only by the 50,000 people who attended, and queued up patiently, but also by our cadre of student volunteers whose hospitality helped make LLF a rich and rewarding experience for Lahore.” Nusrat Jamil, president of the LLF Advisory Committee, adds: “The response this year surpassed our expectations.”

Lahore—the resilient stronghold of Pakistani culture—was itself a star at LLF.

“To belong to Lahore is to be steeped in its romance, to inhale with each breath an intensity of feeling that demands expression,” wrote author Bapsi Sidhwa for Newsweek last year. Mishal Husain of the BBC tweeted: “One of my favorite cities, looking its best in spring sunshine & full of writers & booklovers.” Oscar-nominated filmmaker Mira Nair, one of the most mobbed celebrities at LLF, tweeted: “Walked across border to Delhi after enriching time in Lahore. [LLF], most thoughtful, respectful love for writers, thinkers, crowds! Vah.”

When it was all over, there was a yearning for more. “There are moments in a city’s life when its performance sometimes equals its reputation,” says Fakir S. Aijazuddin, author and art historian. “Lahore, once synonymous with learning and the arts, showed that when called upon, it can exceed expectations. The Lahore Literary Festival defied armchair pundits by being held at all, by being a success, and after it was over, by leaving its audiences gasping for more … The LLF ended, borne aloft on a tsunami of goodwill and bonhomie. Crowds left the auditoriums and then milled about in the open areas, reluctant to go home. Could there have been a greater tribute accorded by Lahore to itself?”