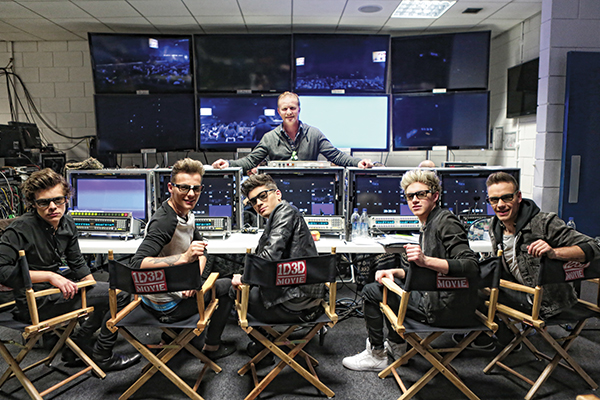 Morgan Spurlock shows us how One Direction got larger than life.

[dropcap]W[/dropcap]ho are One Direction’s biggest fans? There’s 14-year-old Crystal Pineda, who began camping out on the streets of New York City six days before the British pop supernova’s recent performance on NBC’s Today show. There’s the group of fans who threatened to “mutilate” the editors of GQ after the magazine published an unflattering profile of the boys earlier this summer. There’s the girl who attempted to yank this writer’s press badge off his neck on the way to a junket at a hotel where One Direction was staying. And there are Malia and Sasha Obama, who invited the stars to perform at the White House.

You know him as the 42-year-old filmmaker behind Super Size Me, his funny but scathing documentary chronicling his 30 days of eating only McDonald’s and the alarming toll it takes on his body. If you’re a serious Spurlock fan, you know about POM Wonderful Presents: the Greatest Movie Ever Sold, his meta-documentary about the proliferation of product placement and branding of TV and movies, and Mansome, his exposé of male grooming that came out last year. But even if you were Spurlock’s mother, you might not have pegged him as a guy dying to direct One Direction: This Is Us, the new concert documentary about Tiger Beat’s resident cover stars as they circumnavigate the globe on a sold-out arena tour. But think about it from Spurlock’s point of view.

“The day this movie opens, it will be seen by more people in more countries on more screens than people who have seen all my films on opening day ever,” Spurlock says. He’s sitting in a hotel suite in Manhattan, where he’s doing publicity for the film, and even as he speaks, on the seventh floor, you can still hear the sound of One Direction fans screaming outside, waiting to catch a glimpse of the group heading in or out of the building. Spurlock is burly yet kempt, with his trademark Yosemite Sam mustache expertly groomed. It’s a look that makes the smiley, downright giddy way he raves about One Direction all the more surprising (and endearing)—recalling his time with the boys with the same twitter-pated look in his eyes as many a fangirl. “It’s rare as a filmmaker to have an opportunity like this,” Spurlock says, “to get to do a film with one of the biggest bands in the world who are about to explode into an even bigger global phenomenon.” (This Is Us will be the first of his films to ever play at the one-movie theater near his hometown of Parkersburg, West Virginia.)

Plus, if you really think about it, the subject of the documentary—five elfin crooners under age 22 with the power to summon 18,000 girls to Rockefeller Plaza for a concert and then reduce them to heaving sobs—is right in line with Super Size Me, The Greatest Movie Ever Sold, and Mansome, all movies that turned the lens on sometimes peculiar but always fascinating trends in pop culture. In fact, Spurlock had already been previously approached to direct concert documentaries about Justin Bieber and Katy Perry—opportunities he was forced to turn down because he had other projects in development—when he leaped with the vigor of a 12-year-old fan at the chance to chronicle One Direction.

If Spurlock’s fans do join the screaming, swooning hordes lining up for screenings of This Is Us, they’ll get a lot more than a fanboy’s wet kiss to a hot group. They’ll understand, once and for all, what it is about One Direction that will earn them the status of the world’s first billion-dollar boy band. It’s an opportunity to get it: the 30 million records sold in just two years; the sold-out 120-venue worldwide tour; and the confounding way the group reached such heights with so many music consumers being largely ignorant of their music (for a key to the puzzle, say the magic words “social media”), making One Direction both the most and least famous band in the world. They’ll understand the mystifying appeal of a group that, with songs like “What Makes You Beautiful” and “Best Song Ever,” sounds like an awful lot of other pop acts. In other words, This Is Us is not just any concert doc, but a film with considerably more heft than you might expect. And that’s all Spurlock.

Not that he isn’t a fan. “People love to discount them and say, ‘Oh, they were manufactured,’” Spurlock says, alluding to the fact that Harry Styles, Liam Payne, Louis Tomlinson, Zayn Malik, and Niall Horan had never met before Simon Cowell assembled them into a group on the British version of The X Factor in 2010. Of course, that’s hardly a new strategy. The Monkees were a manufactured band—and not a bad one, really. So were Peter, Paul & Mary. Plus, as Spurlock says, “If it was that easy, then why hasn’t a band with their level of success happened for the last 15 years? Why haven’t there been more acts like this? It’s beyond that. It’s much more than that.”

Capturing the “more than that” is where This Is Us succeeds. Sure, the film occasionally gets bogged down in the stereotypical “look at all they’ve given up to get where they are” narrative that can plague concert films (it is both heartbreaking and darkly funny when Liam’s mum buys a life-size cutout of her son in the gift shop at One Direction’s Madison Square Garden concert because she misses him so much). But Spurlock’s movie also captures, again and again, an endearing and often hilarious normality in these couldn’t-be-more-famous singers.

The “lads,” as their handlers repeatedly call them, essentially worked from the successful-boy-band playbook first perfected by the Beatles and employed all the way up through the Backstreet Boys and *NSYNC. It used to be that these groups strove to distinguish each band member from the others by assigning them neat labels that often offered nothing more identifiable or unique than vague branding, but presumably endeared the group as a whole to fans by ensuring that at least one appeals to every demographic. There was the sweet one, the hunky one, and the dangerous one—identifiers which did little else but describe the styling of the clothing a member would wear. The One Direction boys, on the other hand, can’t be filed away so neatly. That’s This Is Us’ big reveal: they’re all the same. That’s to say that they are normal young men: goofy, playful, funny, moody, and far more willing to candidly show off those sides of themselves to fans and the press than any of their boy-band predecessors were. Groups like *NSYNC and the Backstreet Boys were essentially puppets with industry masterminds pulling the strings. Heck, *NSYNC even played marionettes in their music video for “Bye Bye Bye.” One Direction are real boys.

Try not to be charmed when Harry picks the nose of one of his bandmates, or when Martin Scorsese pokes his head into their dressing room after a show, and the teenage Brits clearly haven’t a clue who the man is.

Before shows, the lads scamper around the massive arenas they sell out with the boundless energy of a litter of puppies and argue about who farted on the tour bus. They approach this whole most-famous-band-in-the-world thing with an admirable sense of humor—Louis hopes they’re remembered as a band who “just had fun … normal guys, but terrible dancers.”

So while there’s a large contingent of music consumers who may be completely unfamiliar with One Direction’s music or can only cop to having heard “What Makes You Beautiful” a handful of times on the radio, This Is Us is the clearest look yet at why young girls are, as Spurlock says, “invested in the band like you would [invest in] Apple.” Peruse their hyperactive Twitter accounts, watch their interviews on the talk-show circuit, and go see This Is Us. Do that, and it’s easy to understand why fans who are exposed to—and seek out—the band’s charm get so crazy in love with all of them.

Who knows? After spending some time with them—say, 90 minutes at a screening of This Is Us—you may fall in love as well. “After all our time together, oh, yeah, they’re all over my iPod now,” Spurlock says, laughing. “They’re on shuffle right next to Alice Cooper and Metallica and everyone else. That’s what makes them beautiful.”