Home Latest News The Booze is Back

The Booze is Back 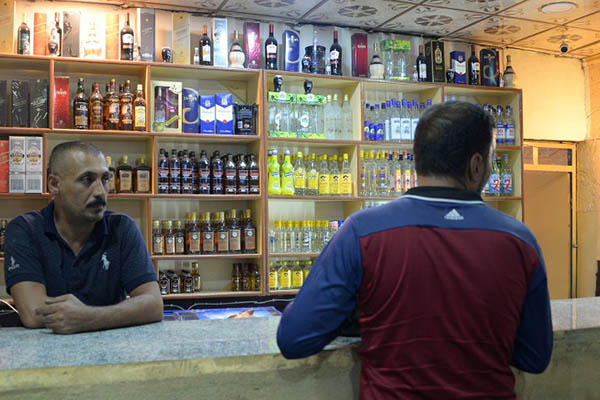 With jihadists gone, liquor stores in Iraq’s Mosul are once again flourishing

Rows of yellow-labelled whiskey bottles sit alongside imported French wines, while cans of Korean beer chill in the fridge: with Iraq’s Mosul free of jihadists, the booze is back.

The city spent three years under the iron-fisted rule of the Islamic State group, which punished those caught drinking alcohol with public lashings or worse. But more than a year since Iraqi forces ousted the jihadists from Mosul, liquor stores are flourishing.

The western commercial district of Al-Duwasa is home to several modest outlets, including Khairallah Tobey’s. The enterprising 21-year-old bounced between well-stocked shelves, pulling down bottles of beer priced at an affordable 1,500 Iraqi dinars—just over a dollar. “Our sales are good right now,” said Tobey, a member of Iraq’s Yazidi minority.

Owners of Mosul’s bottle shops are all Yazidi or Christian, as Iraq does not grant alcohol licenses to Muslim citizens. But under I.S., which violently enforced a strict interpretation of Islamic law when it overran Mosul in 2014, everyone was banned from selling, buying, or drinking alcohol.

Booze never completely disappeared from the city—its residents found ways to smuggle in the devil’s drink—but it was expensive and dangerous. With Mosul back under government control since July 2017, liquor stores are now back in the open.

“At work, I feel relaxed and not afraid or nervous at all, thanks to the security and freedom now present in Mosul,” said Tobey.

Across the Tigris river in the city’s east, vendor Abu Rayan said he has had the last laugh. “I opened up my shop again just to spite Daesh, after it kicked us out of the city and confiscated our property and money,” he said.

Islam forbids the consumption of alcohol, but drinking has remained commonplace across Muslim-majority Iraq. Two years ago, the country’s presidency shot down a draft bill in parliament that proposed a ban on the production, sale, and import of alcoholic drinks.

There are no restrictions on consuming alcohol in Mosul, but those who sell, buy and drink it take certain precautions. Most shops keep their signs relatively discrete, hanging just a few posters advertising Turkish beer Efes or its Korean counterpart Cass to help customers find the store.

Bottles are always packed in opaque black bags, and when they are cracked open, it’s typically out of public view—usually a spot on the Tigris river late at night or in the privacy of a home.

Not everyone in Mosul is thrilled with the city’s burgeoning booze sector. Some residents have demanded liquor stores be shut for religious reasons or to protect young people. But others say doing so would be a violation of individual rights.

“Drinking wine is a personal freedom that is allowed by the law. It has nothing to do with the difficult circumstances that this city has gone through,” says Ali Hassan, who paints homes. He has heard stories of a different Mosul, in the 1960s and 1970s, when people visited bars, clubs, and liquor stores across the city. “They drank openly and without fear,” says Hassan, 33.

Soon after this golden age, Iraq’s troubles began. A string of conflicts in the 1980s was followed by an international embargo that brought shortages of most goods. Then, in 2003, the U.S.-led invasion of Iraq toppled strongman Saddam Hussein—but paved the way for the rise of religious militias across the country, including in Mosul. As extremists gained traction, they targeted liquor stores with gun and grenade attacks.

Now, Mosul may have the opposite problem—too many unlicensed liquor stores are opening up, which has worried authorities and angered those shopkeepers who do have the right paperwork. “We’ve received more than 100 requests for licenses, and so far 25 have been issued,” said regional official Zuhair al-Aaraji.

Shops selling alcohol must be a certain distance from homes, schools, places of worship, and government offices, he said.

Rights activist Mohammad Salem, 31, said regulation isn’t necessarily a bad thing, but that individual rights should be protected. “The best situation is to organize the trade and sale of alcoholic drinks, supervised by social, health, and security authorities,” Salem said. After all, he added, alcohol sales could provide an important source of revenue for Mosul as it rebuilds. “Any decision to ban liquor would contradict personal freedoms, and deprive the city of economic and financial resources that it needs in this current state.”