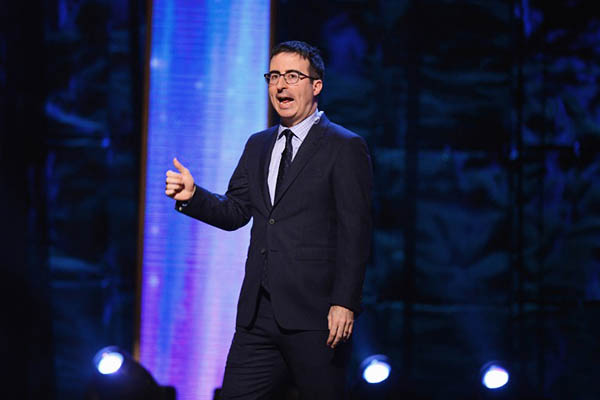 John Oliver may have been ruled out of the running to replace Jon Stewart but the British comedian’s role in helping sway the debate over “net neutrality” has cemented his status as The Daily Show host’s spiritual heir.

Oliver was the first name on most people’s lips last month when Stewart sent his legions of fans into mourning after announcing he was stepping down from the satirical Comedy Central show after nearly two decades as host. The prospect of the 37-year-old Birmingham native sliding into Stewart’s chair receded, however, when HBO swiftly announced it was renewing his own show, Last Week Tonight With John Oliver, for two more years. Yet Oliver’s role in galvanizing American opinion over the once-arcane concept of access to the Internet was in the best traditions of Stewart, a master of using biting humor to unravel complex questions of the day.

Oliver’s 13-minute segment on “net neutrality” last year, in which he exhorted viewers to deluge the U.S. Federal Communications Commission forum with objections, is widely credited with crashing the FCC’s comments page. Within 24 hours of Oliver’s rallying cry, more than 45,000 comments on net neutrality had been posted on the FCC forum, according to the Washington Post.

Fast forward to last Thursday, and the FCC acquiesced, approving landmark rules to prevent broadband providers from separating online traffic into two unequal lanes, which would allow them to charge fees for better access. Many people gave credit to Oliver.

“The democratic support for this decision relied heavily on citing the millions of citizen comments submitted via the FCC’s website, and those comments were overwhelmingly inspired, directly and indirectly, by Oliver’s advocacy,” said Aram Sinnreich, a professor of journalism at Rutgers University.

Oliver, whose show just kicked off its second season, gained massive popularity in 2013 when he stood in for Stewart to guest host The Daily Show while the Comedy Central comedian took a leave of absence to make a movie. “I’ll do anything for him, whether it’s hosting this show or disposing of a body,” Oliver said.

HBO came to Oliver with the 30-minute show, which has only grown in success since. Stationed at a desk, wearing a standard suit and tie plus dark-rimmed glasses, Oliver has pilloried, in a series of clear, well-documented and wonderfully funny arguments, vitamins, the militarization of American police, FIFA football corruption and the bikini-clad women of Sports Illustrated magazine. Time magazine recently ran an article titled: “How the ‘John Oliver Effect’ Is Having a Real-Life Impact.”

It credits Oliver, in part or whole, with a list of accomplishments including increased donations to an association of women engineers, a proposed bill in the U.S. state of Washington to allow online video comments on new legislation, and Attorney General Eric Holder’s announcement that he will enact major limitations on a controversial confiscation law.

“Stewart created the opening, and Oliver has made a significant contribution by expanding it even further,” said Lance Strate, a communication and media studies professor at Fordham University in New York. “Both Stewart and Oliver are doing the job that the press ought to be doing, acting as a fourth estate and holding politicians, corporations and the new media themselves accountable for their actions and statements,” he said.

Furthermore, said Paul Booth, a professor of media and cinema studies at DePaul University in Chicago, “many Americans do love the English sense of humor.”

“Oliver definitely embodies some of the best traits of British humor—he’s sly, witty, charming, able to poke fun at himself, a bit awkward,” he said.

Cambridge-educated, Oliver began his career in Britain before hopping the pond to audition in 2006 for The Daily Show, becoming its “British correspondent.”

Married to an American, Oliver claims to love reality TV and hate massages. “The idea is horrifying to me that a stranger would physically force you to relax,” he recently told Vanity Fair magazine.

In summarizing his take on humor, he said: “If you want to do something evil, put it inside something boring. Apple could put the entire text of Mein Kampf inside the iTunes user agreement, and you’d just go agree, agree, agree—what?—agree, agree.”