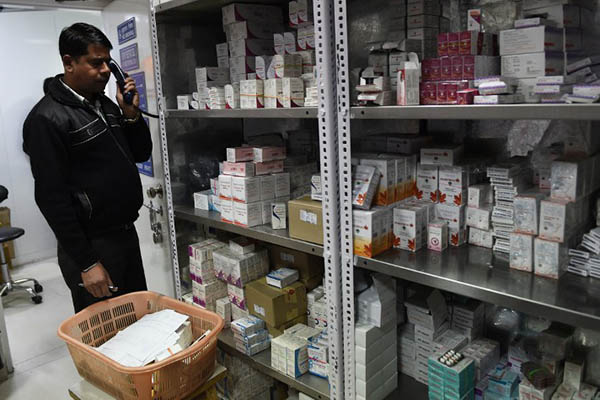 Foreign patients are turning to India for cut-price cures of debilitating diseases.

When doctors told Australian Greg Jefferys he had Hepatitis C and the disease was destroying his liver, the devastating diagnosis was compounded by the cost of a cure. Unable to afford Sovaldi, hailed as a miracle drug, the 61-year-old flew to India, one of a growing army of patients seeking out low-cost, life-saving medicines on the subcontinent.

Their illnesses vary—Hepatitis C, cancer and HIV are among the most common—but they are almost always desperate, seeing in India their only hope to save their life or that of a loved one. They contact underground “buyers clubs,” make the trip to India to buy from a legitimate distributor or seek out shady online pharmacies promising mail-order cures.

“The doctors told me ‘you’ve got Hepatitis C, you’ve probably got liver cancer’,” recalled Jefferys, a Ph.D. student. “The chatter was around the new generic versions of Sovaldi being released in India. I hopped on a plane to Chennai and in about two days I had an appointment with a specialist,” he said.

India earned a nickname as “the pharmacy to the developing world” for its tough stance on patents. Successive governments have taken a view that patents should be granted only for major innovations, not updates to existing compounds—allowing domestic manufacturers to make generic versions of drugs at vastly lower cost.

Sovaldi, chemically known as sofosbuvir, is made by U.S. pharmaceutical giant Gilead and costs $84,000 for a 12-week cycle of treatment in the United States. Rejected for a patent in India, generic drug makers, some licensed by Gilead, produce versions such as Mylan’s MyHep, that cost less than $900 a cycle.

“This is something I observe more and more,” said Leena Menghaney, who runs Medecins Sans Frontieres’ Access Campaign in India, which works to broaden access to drugs. “All kinds of people and patients across the world are starting to access medicines from India. They travel themselves, or they contact a friend,” she said.

More than 130 million people live with chronic Hepatitis C worldwide, according to the World Health Organization, and 500,000 die each year from related liver diseases. Since writing a blog, Jefferys receives 150 emails a day from people in the U.S., Britain and elsewhere asking for help. “India’s production of these generic Hep. C drugs is saving thousands of lives a week.”

When Loon Gangte, a Delhi-based HIV activist was diagnosed with the virus in 1997, the price of treatment was far beyond his reach. But the advent of generic Indian anti-retrovirals saved his life—and made the country a global center for cheap, lifesaving HIV drugs.

Gangte is open about carrying medicines overseas for others and says in a decade he has been stopped just once, at Thai customs, and fined. Most countries allow patients to import small amounts of medicines only for personal use.

Campaigning by activists like Gangte for better access to HIV treatments helped give rise to so-called buyers clubs, made famous by the 2013 Hollywood film.

“When I saw Dallas Buyers Club, I laughed,” said Meera [not her real name] who helps one Delhi club by ferrying drugs illegally in her suitcase whenever she travels. “I hate the term ‘drug tourism’. This is about saving lives.”

Dinesh [not his real name], a long-time HIV campaigner, began working full-time for the same buyers club in August, helping people obtain medicines for a nominal fee. He is not sure how people find him—he has no online presence—but gets requests from as far afield as Austria and Indonesia. “My family were a bit reluctant, there is always a grey area in this, but I fear only the one above. I feel completely that this is right.”

But after losing several high-profile patent battles, it appears drug makers can do little to combat the Indian government’s will or that of overseas patients determined to import drugs. Gilead spokesman Nick Francis told AFP the company was “aware such activity may occur.”

Perhaps the riskiest route is online pharmacies—a search on e-marketplace IndiaMart turns up dozens claiming to sell generics—with no guarantee against counterfeits.

But legal channels are springing up, including Delhi-based Ikris Pharma Network, set up in August 2014, which does not sell drugs but connects patients to genuine distributors. Founder Praveen Sikri receives 70 calls a day from people struggling to access drugs, including generic Veenat, for cancer.

“Either the drug is not available or it is very expensive,” Sikri said. “We help the patient to get the product in a legalized manner.”

One recent email is from a young man in San Francisco whose grandfather desperately needs medicine for a stomach tumor. In India, one way or another, he will probably be able to find it. “There are many, many people doing this,” Sikri said.