Home Lightbox The Collapse of the PDM 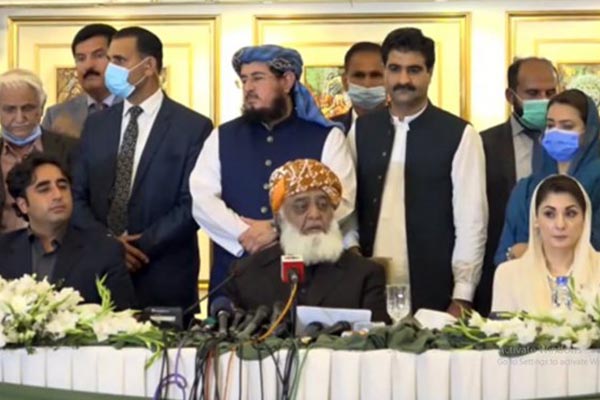 On March 26, 2021, Pakistan Peoples Party Senator Yousaf Raza Gilani was elected the opposition leader in the Senate after his party contended that 31 senators supported him. That left Pakistan Muslim League (Nawaz)’s Azam Nazir Tarrar out of the race, despite claims he had earlier been agreed as the Pakistan Democratic Movement’s joint candidate for the post. The fractures within the “alliance” visibly widened on the “reinterpretation” of the PDM’s “understanding” that PMLN would take the seat of opposition leader.

The development marked a fatal blow to the PDM by the ruling Pakistan Tehreek-e-Insaf, which “managed” the election of Sadiq Sanjrani as chairman of the Senate against the PPP’s Gilani by what the opposition has described as a “manipulation” of votes.

What followed was a PMLN-PPP brawl that virtually brought the “alliance” to an end—though formally it has yet to be dissolve. This was not a surprise to political observers. After all, the bonhomie of the early days of the PDM’s campaign against the PTI government of Prime Minister Imran Khan had already run its predictable course and collapsed. Reason: out of the Big Three of the 10-party alliance, the Big Two—the PMLN and the Jamiat Ulema-e-Islam(Fazl)—had fallen out with the PPP ruling in Sindh over the issue of “resignations” prior to a “long-march” on Islamabad to force the PTI government to surrender and resign.

The long march was unrealistic in the eyes of even the mildest realists. The JUIF has a big following of madrassa students who can look impressive when they form into a “self-reliant” campaign managing their own meals on the road. On the other hand, the PMLN has to depend on its out-of-power regional leaders to bring out supporters at personal expense, which is bound to multiply by many times more than what the JUIF spends on its remarkably “innovative” protesters under “dharna” conditions.

After the “ouster” of the PMLN candidate, what followed was a bitter exchange between the leaders. PPP President Asif Ali Zardari, keen to show his manipulative talent, “revealed” to PMLN leader Maryam Nawaz Sharif that he was backed by the establishment. He said the powers that be were equally fed up with the Punjab government of Usman Buzdar and had proposed “bringing change through a vote of no confidence against the Punjab chief minister and replacing him with Chaudhry Pervaiz Elahi—or someone else (but not a PMLN leader)—as chief minister.”

This was the unkindest cut of all. Zardari wished to communicate to the PMLN that he was “in” with the establishment and would like to bring down the Buzdar government, not to achieve a success of the PDM through enthroning the PMLN in Punjab, but by installing the Chaudhrys of Gujrat, rivals of the Sharifs. Zardari also got his son, Bilawal, to call on the Jamaat-e-Islami, whose branch in Karachi was increasingly “agitated,” and thus challenge the MQM—and indirectly the PTI—in the Sindh capital to clear the way for a PPP-plus-Jamaat comeback.

Can the PMLN muster the kind of strength needed to impress the PTI government—or its behind-the-scenes “custodians”—to surrender and accept its loss of power? Looking at the PDM, one can clearly see that the PPP, in power in Sindh, has more resources for the kind of “long march” the PDM wants. During PMLN public meetings in Punjab, thin crowds indicated that the out-of-power Sharifs had lost a lot of their popularity to the charisma of Imran Khan. One should not forget that Khan’s magnetism is essentially Punjabi and only later of Khyber-Pakhtunkhwa where he has ruled much longer. PMLN’s last gathering in Lahore was a small “jalsa” of reluctant spectators trying to impress with exaggerated gestures.

Shortly after the failed PMLN muster in Lahore in November 2020, its somewhat comic “enemy,” Khadim Hussain of Tehreek-e-Labaik Pakistan, died. Daily The News noted the strength of the number of devotees at his funeral: “Thousands of mourners, followers and fans attended the funeral of the 54-year-old Tehreek chief and firebrand orator Allama Khadim Hussain Rizvi at Lahore’s historic Minar-e-Pakistan, making it one of the biggest events of its kind recorded in Lahore during the last 100 years.” Zardari in Sindh couldn’t have missed the contrast.

The PMLN is no longer in power in Punjab from where it had ousted the PPP during the dictatorship of General Zia. PPP “patron” Zardari, who leads the Bhutto clan, knows exactly how it happened, and sets little store by the PDM’s ability to oust the establishment-supported Imran Khan from power. He knows that the power of the PPP today stems from its government in Sindh where funds are available to sustain the family in power under the 18th Amendment and retain the loyalty of the powerful Sindhi landlords who support him against the Punjabi-dominated north. The need to remain well-provided for with funds has caused the Sindh government to let the people of interior Sindh be bitten by stray dogs and abandon non-PPP-supporting Karachi to urban collapse through neglect.

In September 2020, Zardari and his sister Faryal Talpur—the latter seen by people as responsible for the “stray dog” problem of Sindh—were indicted by the National Accountability Bureau in massive money laundering cases. Among big hauls, Zardari was also indicted in the Park Lane Company reference and 12 other cases causing a loss of Rs. 3.77 billion to the national exchequer through use of fake bank accounts. The NAB had also moved against him on irregularities in the Thatta Water Supply scheme.

In contrast to the PMLN and JUIF, the PPP is “in power,” but only in so far as it can avoid being thrown out of government in Sindh. Its greatest vulnerability springs from the fact that Karachi doesn’t belong to it, does not vote for it, and would join Imran Khan given a chance—Khan was elected to Parliament from Karachi—to get rid of the PPP government. Were the PPP to resign from power, it would equate itself with the PMLN in Punjab and would lose in the cities in Sindh where the MQM retains its vote-bank to some extent. The PPP and JUIF are without the kind of power the PPP government has in Sindh. There is little doubt that the PPP feels it is being shortchanged by the other bigwigs of the PDM.

The PPP’s past battles with the PMLN are embedded in its memory: the legacy of Zulfikar All Bhutto was usurped in Punjab by the PMLN protégés of General Zia. Sindhi nationalism, based on opposition to the upstream Kalabagh Dam is now the hidden charter of the big land-owning class in Sindh. It is directed against Punjab that “steals” the water of the Sindhi farmer. Sindhi nationalism continues to be opposed to new upstream dams. It is intensified when Karachi is seen being snatched from them. Resourceful Zardari leads the campaign that would “talk” to the establishment and join the campaign to oust the PMLN from politics altogether and allow the PPP time to regain strength and reassert itself in Punjab under Bilawal Bhutto-Zardari.

The PTI, in power in Islamabad, Peshawar and Lahore, awaits the final denouement of the PDM drama, led by Maryam Nawaz Sharif whose fiery campaign is directed from London by an angry Nawaz Sharif. The Sharif clan, as a whole, doesn’t look at it with favor and “brother Shahbaz” would like even today to “communicate” with the “powers that be” somewhat like Zardari in Sindh. The “other brother” has always been more realistic than his elder brother in the game of “real power” in the country. The kind of burn-all-boats approach advised by Nawaz to his daughter will not help bridge the intra-Sharif rift over how to deal with “the powers that be.”

For now the PDM is over. Its campaign has simply allowed Zardari to exercise his “strategic” maneuvers to extricate his family from the claws of Pakistan’s increasingly dubious process of accountability under NAB. His strategy of a PPP comeback in Punjab has probably coincided with the intent of the establishment to bring about a change in Pakistan’s biggest province and Imran Khan’s bailiwick. The “win” for the PPP is anything but for the rest of the PDM.