Home Latest News The Cost of Cutting the Internet

The Cost of Cutting the Internet 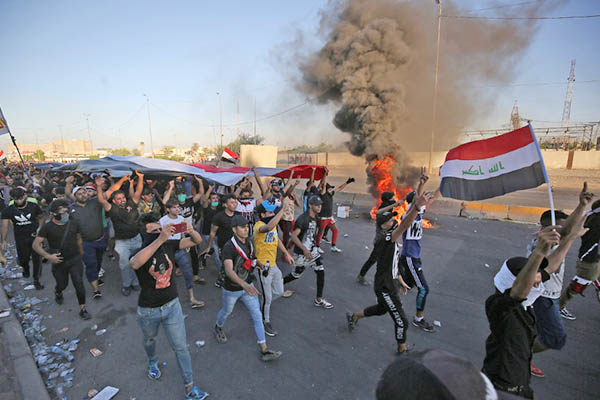 When anti-government demonstrations shook Iraq, authorities cut the internet to disconnect protesters and slow sharing of bloody images—a digital clampdown estimated to have cost the economy nearly a billion dollars.

Officials say 110 people died in the violence in the first week of October, mostly protesters killed by gunshots. From the second day of unrest, the internet was restricted and the day after authorities ordered it cut entirely.

A fortnight later, while calm has returned to the streets, social media websites are still blocked. The only way around the restriction is to use a virtual private network (VPN) application, which connects to networks outside the country, or via expensive satellite connections. But for enterprises whose business is conducted online, these workarounds have not prevented heavy losses.

One online delivery company incurred more than 50 percent losses daily after it lost access to the locations of its clients, businesses and couriers, its finance director told AFP. Scheduled deliveries were possible using offline maps but the delays cost them customers, the manager said, asking to remain anonymous.

And when they started using the telephone instead of the internet for communicating with clients, bills shot up, compounding losses, he added.

Cyber security NGO NetBlocks estimated the total losses to the Iraqi economy at $951 million. But this only took into account the seven days of total blackout. Restrictions that continue 12 days later on the 3G mobile network and social media platforms continue to cost the economy an estimated $10 million daily.

Worst hit are the start-ups that are just starting to flourish in Baghdad and elsewhere in Iraq—where online shopping and services are still in their infancy.

Iraq has more than 15,000 digital storefronts on Facebook and Instagram, said an I.T. professional familiar with the country’s digital economy. “Online sales were totally stopped for 12 days because they are hosted on social networks,” the expert said, asking to remain nameless to discuss a sensitive topic.

Normally, each of these pages might make “10 to 15 sales a day for an average of $40 per purchases,” he said, estimating losses already into the tens of millions of dollars.

The cuts have also had a social impact in the conservative country, where many find work in the informal economy. “Many women can’t work outside the home,” the e-commerce expert noted, adding that working online offered a way to support their families without breaching social norms.

Couriers have also been affected. “According to estimates, more than 400 motorcyclists and 5,000 delivery drivers have been out of work for 12 days,” he said. And travelers who might otherwise make reservations online are calling travel agents to make arrangements.

At one travel company in Baghdad, an employee told AFP they were losing $15,000 in commissions daily. To retain clients, the agency was making reservations via companies in Iraqi Kurdistan—the autonomous region where internet is unaffected. “We’re not making anything on the transaction,” the travel agent said. “But at least we’re keeping their loyalty for later.”

But while the company was retaining clients, employees were leaving. “Four colleagues quit because of the blackout,” she said. “They were worried about having no salary at the end of the month and left to look for work elsewhere.”

Already, she said, most travel agencies have announced salary cuts of 30 percent.

For now the digital blackout may continue, despite the telecommunications ministry announcing Friday that connections were restored. Internet service providers however have told their clients they do not know when they will get orders to reconnect the network.