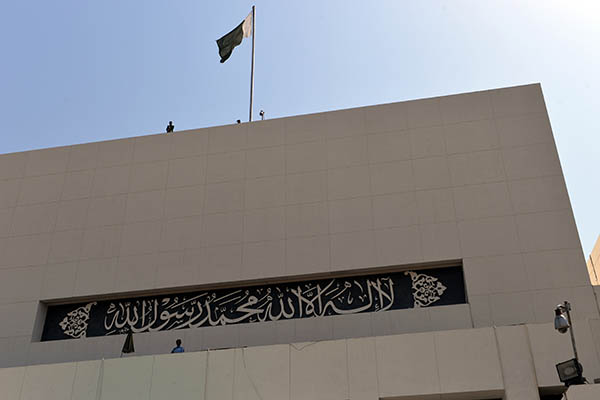 This is how Pakistan’s political landscape looks right now: there’s a politician who thinks that unelected institutions are undermining his mandate (read: democracy) and a conspiracy is afoot to boot him out of politics. He wants us to believe that were that to come to pass, all the good he managed in the past four years will be wasted.

A second politician, a bête noire of the first, even when he is sojourning in the hills or getting betrothed—his version of penning an ode on melancholy—fulminates against the first like a stuck record and wants us to believe that without him on the throne, our past will continue to haunt our present and, of course, our future.

Then we have the top judge in the realm. He has decided that he must perform the job of the executive by using his unchallengeable legal authority, mixing law with policy. By his own statements, he likens himself to the rustic sage, the generic Baba Rehmatay. Since his brother judges disqualified the first politician, the good Baba’s detractors think that his public posturing is not just deliberate judicial activism against the first politico and his party but seeks, as a longer-term strategy, to entrench the concept of the judicialization of politics.

In another place, what was once the British Indian Army’s Northern Command Headquarters and is now referred to as General Headquarters, sits a tall, uniformed man from Gakhar Mandi. He believes, like many of his predecessors, that politics is dirty and politicians are jokers, even as he considers himself the biggest defender of democracy. He also has a ‘doctrine,’ we are told, an all-encompassing approach to issues ranging from those he has the expertise in to those he believes he has an expertise in, the two concepts being somewhat different but generally (no pun) conflated in the GHQ.

Among these four there are many others, flotsam and jetsam. Some are claimed by the original owner, others by whoever discovers them.

Equally, all four have their lackeys, followers, supporters and detractors. What anyone says about them depends on where (s)he stands. If you support the second politician, you will find the first comic and yes, also, corrupt. If you support the first, you are contending with the other three, the devil himself and Charlie’s aunt because the entire play has been written to banish the first not just from public office but also, and that’s indeed heart-breaking, from public duty.

If you are a supporter of the good Baba, it will be safe to surmise that you aren’t much enamored of the first politician and might also like the tall man in uniform. You might or mightn’t be a fan of the second politician, though if I were to make a wager I’ll probably put my money on might. It will also mean that given the plethora of problems you face in living your daily life, very basic things, you do want someone to clean up the stables for you and believe, the absurdity of it notwithstanding, that it takes one earnest man in authority to do it. It will also mean that while you are alive to your own interests, you fail to, or refuse to, understand that politics is about a vast multiplication of interests and aggregating them is no cake walk.

Corollary: the political jokes in Parliament have to perform a very tough task.

Those who believe that the tall, uniformed man with his notion of noblesse oblige, as reported by those who met him recently, can perform and deliver where politicians fall short—or have disappointed—quite obviously failed history at school and continue to be afflicted by ahistoricism.

This works for the first politician, as far as populism goes. As happens at crisis moments, people take partisan positions and select facts that suit their respective positions. To expect any nuanced debate at that point is to expect someone to sell refrigerators to Eskimos.

Put another way, when the first politician talks about votes and democracy, even those who might not like him but believe for good reason that technocracy and messiahs can neither do politics nor offer panaceas, have to put a moratorium on the basic question of what we mean by democracy and/or whether the first politician, when at the helm, sought to strengthen institutions, i.e., the rules of the game. He didn’t. His rhetoric post-disqualification can be challenged on many counts, not least that since his departure his party’s government has performed much better than he did. Yet, the current principal contradiction forces many intelligent people to deal with the immediate rather than the nuanced.

Corollary: there’s no debate on parliamentary reforms; or elections; the constitution; power-sharing between the center and the provinces; effective local governments; governance et cetera. And if there is, it navigates choppy, partisan waters instead of exploring the issues for what inheres in them. There’s nothing peculiar about this. Subtleties, like a crisp white shirt, are lost when one is under fire and crawling to safety.

The second politician could have mounted an effective challenge to the first if he rose above his fulminations or produced some original thought. But that did not happen. Some would say he is as adept at thinking as the salesperson who couldn’t sell beer to a platoon of troopers in a desert. That aside, his vaulting ambition continues to prick the sides of his intent and he awaits a deus ex machina to descend and straighten the kinks in the plot in his favor. That might still happen, he thinks, as do his followers.

So, what does one do in this landscape?

There are only two choices: become a partisan or detach oneself and get berated by all sides until this phase is over and we have hopefully moved to the stage when we can wear the crisp white shirt once again.

The tested wisdom in this God-chosen land is that wisdom and patriotism come only if you are in uniform. Minus uniform you are disposable!