Home Lightbox The Curse of Discourse

The Curse of Discourse 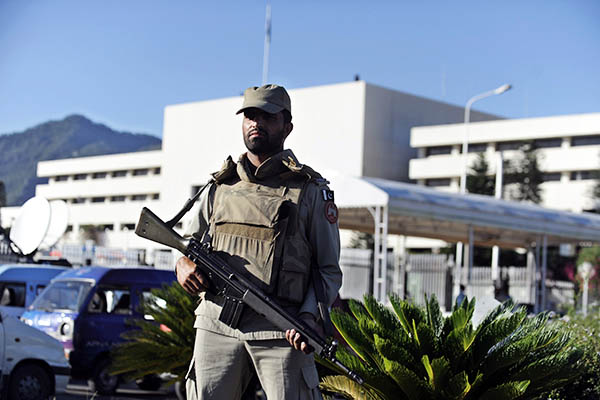 A Ranger stands guard outside the National Assembly. Farooq Naeem—AFP

Prompted by their political leaders, Pakistanis are more likely to hurl insults at each other than engage in civil communications.

Two political parties clashed inside Pakistan’s National Assembly on Thursday, using scurrilously abusive language, and exchanging kicks and slaps as the entire spectacle unfolded live on TV. After the fisticuffs, both sides—instead of being apologetic—heaped more abuse on each other in talk shows and press engagements. Was the nation offended? Yes, but in a partisan bifurcation, staging a secondary contest of abuse between Pakistan Muslim League-Nawaz (PMLN) and Pakistan Tehreek-e-Insaf (PTI) supporters. What happened in Parliament, therefore, was not universally condemned as it should have been.

The root of political conflict and national instability lies in how the opposition in Parliament has reacted to alleged corruption. Endemic in third world states, corruption has always been known to exist in Pakistan, which many ascribe to instability born of the decline of state sovereignty. But the public discourse on the corruption of the incumbent government is unique to Pakistan and sets it apart from India where corruption is equally rampant. Ironically, as the politicians brawled in Parliament, Transparency International announced that Pakistan had improved its position on the corruption index by nine points!

But the art of discourse has been impaired across Pakistan. People no longer discuss politics rationally but abusively, taking their cue from what the politicians—prompted by ratings-hungry anchors—do during TV discussions. As language affects physical behavior, people’s conduct on the road has also become dangerously aggressive. Normal communication has been replaced with unkind words and it is no longer safe to engage in conversation with strangers. The vocabulary of the PTI sit-in (dharna) has penetrated the mind of the common man and the only discourse possible now is that of insult and abuse. In this atmosphere, it is no longer possible to fairly decide which party is in the right and which party should be punished by the Supreme Court where both continue to face off in the Panama Papers case.