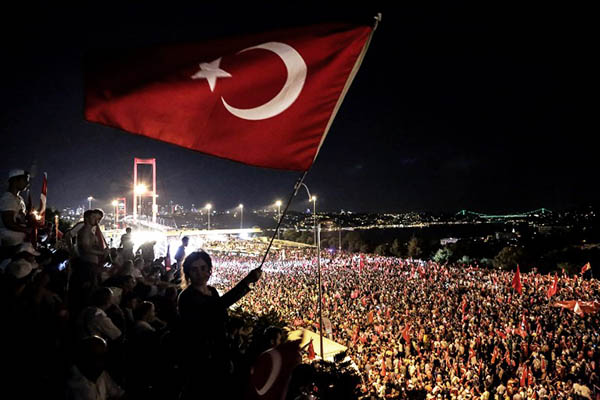 The aftermath of July 15, the day of a failed military coup, could affect Ankara for years.

For most people in Turkey, July 15, 2016 was just another brilliant summer day heading into a balmy night. Until around 10:30 p.m. Then came the F-16s roaring over Ankara, dropping bombs on targets including parliament. Tanks and heavily armed soldiers appeared on the Bosphorus bridges in Istanbul, where they were soon confronted by angry citizens.

A week after the coup that was meant to unseat President Recep Tayyip Erdogan was launched and then defeated within hours, there remain many unanswered questions about its origins and how close it came to success. But one thing is clear. Turkey has changed.

While many Turks have bitter experience of full-scale military coups where tanks surged into the streets in their living memories—in 1960 and 1980—never before had there been such bloodshed, with 265 people killed, among them 24 coup plotters. “This coup attempt maybe did take the world, the country and people like us by surprise,” said Kemal Kirisci, senior fellow and director of the Turkey project at the Brookings Institution. “What was shocking was the level of violence. Never before had parliament been attacked.”

Erdogan’s ruling Justice and Development Party (AKP) is now overseeing a crackdown unprecedented since it swept to power in 2002 on a wave of popular support to put Islam at the heart of Turkish politics, sort out the economy and build new infrastructure. Since the failed putsch over 10,000 people—soldiers, judges and prosecutors as well as civil servants—have been detained in a wave of retribution that has sparked intense concern about the rule of law in Turkey.

Another 50,000 have been dismissed from their jobs, including over 20,000 in state education, raising questions about how those places will filled. A three-month state of emergency has been declared.

“This is an extraordinary moment in Turkey. We haven’t seen anything like this since the 1980 coup,” said Steven Cook, senior fellow at the Council on Foreign Relations. “The speed, the numbers of people who have been purged… is extraordinary.”

Erdogan has spoken of cleaning a “virus” from all state institutions. With 125 generals and admirals detained over alleged involvement in the coup, the armed forces that emerge in its aftermath will be virtually unrecognizable.

Turkey’s relations with the E.U. have become more tense, particularly after Erdogan said he would consider reinstating the death penalty, which would drive the final nail into the coffin of its stalled membership bid. Already strained ties with the United States risk becoming tetchier over the presence inside a leafy Pennsylvania compound of the mysterious, softly spoken Islamic preacher Fethullah Gulen, whom Ankara blames for the coup bid.

“The priority is to put the state back at work after this huge shockwave,” Marc Pierini, visiting scholar at Carnegie Europe and a former E.U. ambassador to Turkey, told AFP. “The way in which this will be done will have major implications for the international standing and economic success of Turkey. Western governments are asking themselves many questions at the moment,” he added.

The government, much of whose popularity in recent years has rested on successful stewardship of the economy, has insisted business is as usual and vehemently rejected imposing capital controls. But the lira has dropped around six percent while the stock market has seen around 10 percent of its value wiped out in the past week.

“A post-event return of comfort is unlikely to materialize until it is clear that Erdogan’s choices cause no permanent damage to the Turkish outlook,” said Michael Harris, Turkey strategist and head of research at Renaissance Capital.

All this in a country of almost 79 million which, as well as being a key NATO member, is hosting some 2.7 million refugees from the conflict that still rages in neighboring Syria and who have no prospect of going home anytime soon.

Turkey also hosts dozens of U.S. tactical nuclear weapons at its Incirlik airbase in the south of the country, which is also used by American forces for raids against jihadists in Syria. Cook said that Erdogan was now taking advantage of the coup “to clean house” against enemies and could also assume full control of the military which was in a state of “chaos.”

“I think it’s clear that Erdogan is going to insist on using the Gulen issue to keep Turkey on what is essentially a war footing at this point,” he said.

But for all the dark clouds, there were also uplifting moments in the people’s reaction to the coup, which partially brought together a nation deeply polarized by Erdogan’s rule. Turkey’s media showed a rare fearlessness in standing up to the plotters while all opposition parties lined up to denounce the coup.

The opposition Republican People’s Party, which sees itself as the guardian of the country’s secular tradition, will hold a mass rally to denounce the coup on Sunday. “The citizens’ and political parties’ reactions confirm what we knew for years from opinion polls—Turks overwhelmingly reject military coups,” said Pierini. “This means the society has matured.”