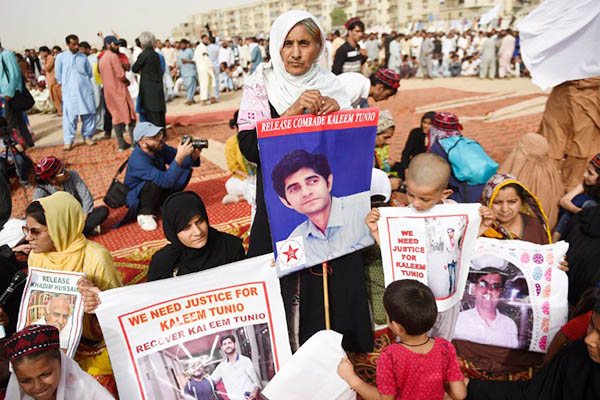 People go on disappearing in Pakistan and no one apparently cares. In April, Justice Athar Minallah ordered the Military Intelligence and the Inter-Services Intelligence to submit a report on scientist Nozair Hassan and his wife, who were suddenly taken away from their Islamabad house by black-clad secret agents. Nothing came of it and now a Ph.D. student Laeeq Aslam has been taken away by half-a-dozen men from his Rawalpindi house.

During the last by-election in Lahore, councilors belonging to Pakistan Muslim League (Nawaz) “disappeared” but have kept mum about what happened to them or where they were taken since their return. This has happened to many in and around Islamabad-Rawalpindi, mostly “radical” teachers and “secular” bloggers.

Amina Masood Janjua, a human rights activist and chairperson of Defense of Human Rights Pakistan, says there are 70,000 reported cases of “enforced disappearances” in Pakistan. In Balochistan, where there is an insurgency afoot among the ethnic Baloch, people have been kidnapped and tortured before being released. Some have never returned. Janjua’s husband, who ran a computer college, was picked up in 2005 and has not returned from wherever he was taken.

The identity of the people who disappeared gives us a clue about the “grounds” of disappearance. What is worrisome is that these grounds are not related to the security of the state but to the dogma of rejection on the basis of “ideology.” In Bangladesh, the terrorists and radical Islamists attack “secular” and “liberal” bloggers but the state keeps away from it. In Pakistan the state is silent, which means it doesn’t want to say if it agrees with the disappearances. Most observers assume the state is doing “ideological” purges on the sly. At times, it appears, the “disappearances” emanate from personalized ideological parameters of the commanding officers who get citizens picked up for “correction.”