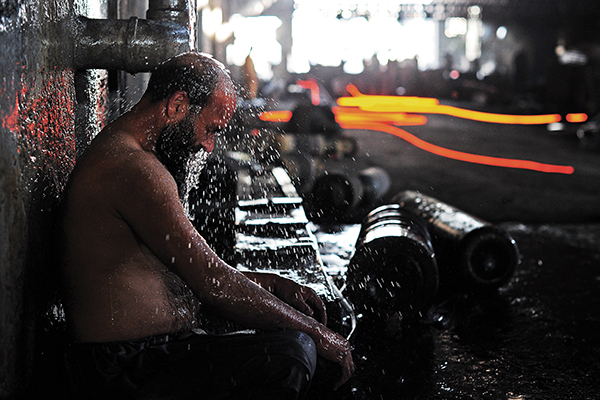 I come from a family of card players. Both my grandfathers were keen on bridge, and my parents first met at the University of London on orientation night when my mother wanted to know where the bridge club was and my father offered to escort her there himself. The good thing about cards, especially if you play for money, is that it teaches you how to count. Or to be more precise, it will either teach you basic concepts of probability or else make you very popular with your card-playing friends.

The standard argument against privatization goes something like this: Look at Sweden; see, state-owned entities can be profitable.

There are two fairly simple reasons that state-owned entities tend not to make money. First, all people in power are under tremendous pressure to oblige their friends, families, and supporters with jobs. Yes, people in power should be righteous, honest, and sagacious—as the Constitution demands. But the odds are that they are not going to be saints. Instead, the probability is that they are going to be like any other politician anywhere else in the world: somewhat less than saintly. This in turn means that when the government (i.e., politicians) owns companies, the odds are that politicians will use those companies to oblige friends, families, and supporters.

Second, making money is tough. Most new businesses fail. Yes, the world will beat a path to your doorstep if you build a better mousetrap. But it’s not that easy to build a better mousetrap. If you really want to make your mousetrap better, you will have to work really hard. But getting people to work really hard is difficult. The most reliable way to get people to work hard is to pay them large amounts of money for it and to reward them for doing good work. On the other hand, state-owned entities can’t pay outsized salaries, and because promotion is rigidly controlled, it doesn’t normally matter whether you have good ideas or bad, whether you work hard or you don’t. Yes, some people will still work hard under those circumstances, but the odds are that almost all of them won’t.

If you put these two points together, the odds are that over time a state-owned enterprise will become progressively choked with increasingly useless people who have no real incentive to work hard. Sound familiar?

Governments need to play for the long term, not for the headlines in the next day’s newspapers. So, yes, Pakistan International Airlines under Air Marshal Nur Khan was a world-class, profitable airline. But his tenure at PIA ended in 1965, close to 50 years ago. You would be hard pressed to name another managing director of PIA since then; or more appropriately, name one who is remembered for something other than being an incompetent crook. Since we live in a litigious age, let me clarify that I’m not saying all PIA chiefs have been incompetent crooks. I’m just saying that I can’t remember any who weren’t.

Asad Umar of the Pakistan Tehreek-e-Insaf party has recently written an article arguing that, as in the case of Malaysia, unprofitable state-owned entities should not be privatized but instead should be restructured under an independent board of directors. Good idea. But how do we ensure that the state of Pakistan will appoint independent, competent, decent directors for each public-sector company when, as per Umar himself, even the Privatization Commission (which his brother heads) itself has a board “based on nepotism and political favors.”

What Umar is saying is that the state should act like a rational, profit-maximizing investor when it comes to appointing directors of state-owned enterprises. No disagreement there. But why do we need the state to mimic private parties? Why not get private parties to act like private parties? What’s more likely? That a private-sector owner will act like a rational, profit-maximizing investor or that a popularly-elected government will ignore all political incentives to the contrary and not use its ownership of state enterprises to oblige friends and family? I am not saying it is impossible for a government to run a business profitably; I’m just saying that it is highly unlikely—especially over a longer period of time.

Does this mean that everything in the world should be privatized? No. There are certain basic responsibilities that the state cannot outsource, such as the provision of security, health care, and basic education. Given the nature of rail traffic, we are probably stuck with Pakistan Railways as well. But I fail to see why the government of Pakistan needs to run a steel mill or an airline.

There is also a difference between privatization and abandoning a sector completely. PIA should be privatized. The Civil Aviation Authority should not. Furthermore, even when PIA is privatized, it will need to be regulated. And yes, regulation can be tricky. But while getting decent, honest, competent regulators in place is difficult, it is still a lot easier to manage than running a business. And in the end, the odds always win.

Privatisation with strict regulatory oversight negates the very purpose of privatisation. In a country like Pakistan that is essentially a kleptocracy, first privatisation will indeed be a ‘loot sale’ and second the regulators will be in the pocket of the new private owners. More importantly, nobody wants to buy losing companies unless there is some underhanded advantage. Just take LESCO, the investment required to upgrade the entire grid is stupendous and to assure that all consumers pay up intrudes into the ability of the public law agencies to enforce that. Will privatisation improve things in Pakistan? Dream on.

You and Asad Umar failed to provide arguments to understand the real problem. The debate between private v/s public was settled in 80s. In hindsight, one can provide compelling evidences to support that it’s not the job of government to run airlines, steel mills or power plants. Or in Asad Omar case, how transparent is government bureaucracy with regards to privatization of public entities? The real problem is the lake of economic freedom and competent judiciary. As long as Pakistan has so called rant economy and a rigid regulatory regime, there will be cheating and higher losses of resources.
By the way, Sweden is the capitalist country. The government monopoly is only on education, healthcare and some other infrastructures. Manufacturing and services industries are in private domain and fearlessly competitive.