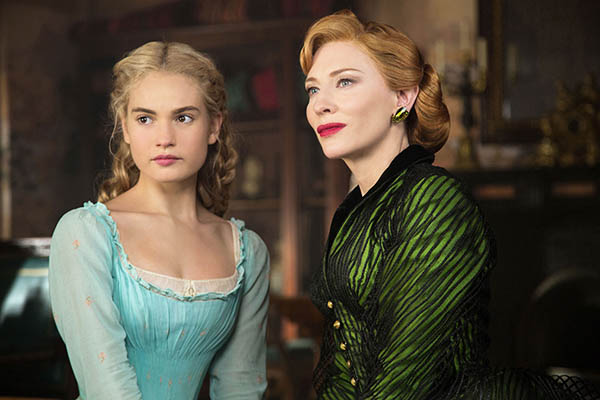 Director Kenneth Branagh says he wanted to adapt the story into one featuring a story of love between equals.

Cinderella and Prince Charming met on an equal footing Friday at the Berlin film festival in a modern retelling of the fairy tale by Kenneth Branagh, with Cate Blanchett as a gambling, hard-drinking Wicked Stepmother.

Cinderella, a Disney production, has been dubbed a “feminist” live-action twist on the story of a girl’s dreams coming true. Lily James, 25, of the Downton Abbey television series, plays the orphaned young woman who becomes virtually enslaved by her cruel stepmother and stepsisters.

Branagh said that he wanted to adapt the traditional tale in which a handsome prince whisks her away from a life of drudgery to become his queen and tell a story of love between equals. He said the aim was to “make the prince a sort of charismatic complement to Cinderella, someone who earns the right to her affection where both meet not knowing who the other is and on equal terms.”

The pair first encounter each other while riding on horseback through the forest and a comedy of mistaken identity ensues which Branagh said was reminiscent of the Shakespeare plays he has filmed in the past. He said the Cinderella story “continues to capture our imaginations” but said he was “surprised to be quite so moved” when taking a closer look at the story, which begins with the “first experience of loss by a child.”

“It’s possible that the myth has hung around across every culture, across thousands of years because it is flexible and adaptable to the time in which it’s presented,” Branagh, 54, said.

Blanchett, 45, said she was interested in exploring “how does jealousy develop between women.”

“Certainly when you get to play someone with wicked in front of her name you know it’s going to be slightly fun but I was too old for Cinderella and not funny enough for the Fairy Godmother so I got what was left over,” the Australian actress joked.

In the film, screened at the 65th Berlin film festival Friday, she portrays the godmother as a spendthrift schemer who commandeers the stately home of her new husband before his untimely death to throw raucous parties with high-stakes gambling. British actress Helena Bonham Carter, who drew big laughs as a Fairy Godmother whose magic wand helps get Cinderella to the ball to meet her prince, said she liked the film for its attention to even minor players.

“There’s nothing cartoony or two-dimensional about any of these characters,” the 48-year-old said.

Scottish actor Richard Madden of the Game of Thrones series said he liked playing a more progressive Prince Charming than in Disney’s 1950 animated film, which picked up a prize at the first Berlin film festival that year. “It was just lovely to be part of something where it is really female dominated. The original animation was much more about this girl and a boy kind of saves the day and this version is so not like that,” Madden, 28, said. “You see a really strong woman by herself and a young man coming together and it’s about them coming together that makes the story, rather than a kind of more sexist view from the older animation.”

One of the film’s producers, Allison Shearmur, who worked on the Hunger Games blockbuster series, said Disney was keen to present a “strong and contemporary” heroine for girls around the world. “What was really, truly evolutionary and magnificent about Ken’s take on Cinderella was that her strength wasn’t necessarily overt,” she said. “It wasn’t in the way she held a bow and arrow, and it wasn’t that she was given a shield or a sword but her strength was something internal … independent of how others saw her or influenced her beliefs.”

Cinderella screened out of competition at the festival, which runs until Sunday.

How very worthy. But feminist reworking of classic tales just reflects the people who are currently in power. There is nothing egalitarian about this reading by the sounds of it though. Cinderella has always reflected the hypergamous female fantasy of ‘marrying up’. If this was about equality, she’d happily end up marrying Shrek. But it isn’t. Its the equivalent of a bimbo marrying a billionaire