Home Lightbox The Footsteps of History

The Footsteps of History 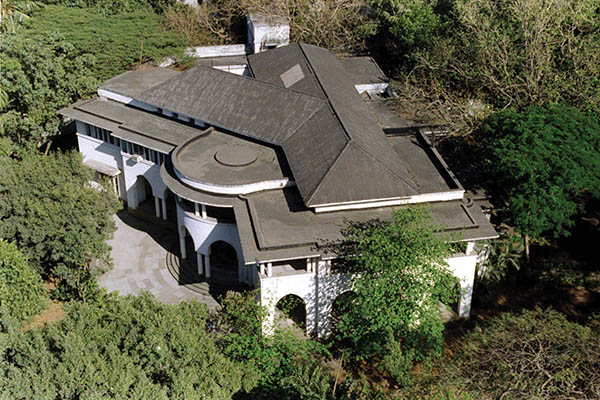 For Muhammad Ali Jinnah, South Court was more than just a house—it was his home

It was the summer of 1947. An elderly man, looking older than his years, stood on the steps of his home on Mount Pleasant Road, in Mumbai, India. (It was known as Bombay in those days.) His Savile Row suit hung with inconsiderate looseness on his emaciated frame. His two-toned shoes, immaculately polished, had not yet been soiled by the dust of Mumbai. While he waited for his chauffeur, Muhammad Hussain Azad, to bring the sleek Packard from the garage, his mind meandered over the events in his life that were inseparable parts of this house.

Muhammad Ali Jinnah recalled the 1930s when he bought a plot with an area of 2.5 acres in the exclusive suburb of Malabar Hill, of how he commissioned British architect Claude Batley, then practicing in Mumbai, to design a home simple enough to accommodate his spartan way of life, and yet grand enough to advertise his success as one of the finest and highly paid lawyers of his generation. Brick-by-brick, he watched it grow before his admiring eyes. Every feature—the deep verandahs, the polished walnut woodwork, the Italian marble affixed by Italian workmen imported for the job, the staircase, the billiards room, public and private areas divided between the upper and the lower storeys—was grouted as firmly in his memory as they were in the edifice itself.

As he stood on the steps, he glanced toward the sea. It was a view worth paying for once, and enjoying for a lifetime.

He remembered moving into the house when it was finished in 1936 and giving it the name ‘South Court.’ It had cost him Rs. 200,000—a princely sum for the time. He could afford it. South Court was not just another real estate investment as was the house in Delhi. He was investing in his future. South Court was where he planned to retire with his inseparable sister and helpmeet, Fatima.

He found it difficult to recall his chagrin at discovering, in 1938, that his only daughter Dina had decided to marry Neville Wadia, a Parsi or member of the Zoroastrian community. His own wife Rattanbai too had married against her Parsi father’s wishes, but that—even for a lawyer like him—was not a strong enough precedent. Dina’s marriage was against his wishes. “When he learned of her marriage,” his driver later narrated to Saadat Hasan Manto, “you could see grief on his face.” He continued: “For two weeks, he would not receive visitors. He would keep smoking his cigars and pacing up and down in his room. He must have walked hundreds of miles in those two weeks [.] His brown-and-white or black-and-white brogues would produce a rhythmic pattern of sound as the night wore on. It was like a clock ticking.

“After two weeks, he resurfaced. There was no sign of grief on his face, nor any tension. His head was again held high, although for two weeks he had tended to keep it bent. But this did not mean he had forgotten what had happened or really recovered from it.” In his eyes, his disobedient daughter Dina had forfeited her place in South Court and in the will he made a year after her marriage.

It was his legal training, a habit more than premonition that directed him to prepare a will in which he recorded the distribution of his assets between his immediate family. After making bequests to his three sisters and brother Ahmed, he left to Fatima his “house and all that land with appurtenances, outhouses etc. situated at Mount Pleasant Road, Malabar Hill, Bombay, including all the furniture, plates, silver and Motor Cars in its entirety as it stands absolutely.” His daughter received not even a mention in the will.

Dina remained a memory locked in his heart, as were her clothes as a child and those of her mother. Standing on the verandah steps, he thought of the occasions when he would tell his servants to bring “a certain metallic chest” to his room. His driver knew what it contained: “It was full of clothes that had belonged to his dead wife and his headstrong daughter when she was a little girl. The clothes were taken out and sahib would gaze at them without saying a word. His gaunt, transparent face would become clouded. ‘It’s all right, it’s all right,’ he would say, then remove his monocle, wipe it and walk away.”

This was the same verandah upon which he had stood with Mohandas Karamchand Gandhi in September 1944 after their inconclusive talks. He thought he knew Gandhi too well, yet even he was caught off-guard when the activist, spotting photographers at the foot of the steps, suddenly put his arm around him in a public, unfelt demonstration of Hindu-Muslim amity.

Like Gandhi, lean and abstemious, Jinnah ate half as much as any of his guests did. He kept two cooks at South Court—one employed to prepare European dishes and the other under-employed to make Indian ones. A young guest—Syed Babar Ali—described what eating at the Quaid’s table was like: “We were served grapefruit, fish, and roast chicken with the skin on. When I tried to carve the chicken, a piece fell on to my lap! I picked it up with my hand and put it on the plate. I looked at Mr. Jinnah who pretended that he had not noticed… he was a generous host.”

It was on this very verandah that his daughter Dina in 1946 had brought her two children for what would be their last meeting with their grandfather. “As we said goodbye, he bent down to hug Nusli,” is her nostalgic memory of the occasion. “The gray cap, which he wore so often that it now bears his name, caught Nusli’s fancy, and in a moment he had had put it on his grandson’s head saying, ‘Keep it, my boy.’ Nusli prizes the cap to this day.”

For Dina, the mementoes of her own mother held more significance. In June 1947 she wrote to her father, asking whether she could visit South Court in his absence (he was in Delhi) and take some of her mother’s books—“Shelley, Byron and the Oscar Wilde series.”

That summer of 1947, when Jinnah walked down the steps to his car, he never imagined that he would never see South Court again.

His brainchild—the fledgling state of Pakistan—could be as demanding as any natural child, and its continuous needs drained him. His waning energy, his deteriorating health and eventually his irreversible illness preoccupied him. Yet, they could not erase within him the deep longing he felt for the home he had sacrificed—South Court in Malabar Hill.

After August 1947, Pandit Nehru through his High Commissioner Sri Prakasa asked the Quaid whether he would allow South Court to be put on rent, and if so, at what rate. Jinnah’s reply could not have been more poignant: “Sri Prakasa, don’t break my heart. Tell Jawaharlal not to break my heart. I have built it brick by brick. Who can live in a house like that? What fine verandahs! It is a small house fit only for a small European family or a refined Indian prince. You do not know how I love Bombay. I still look forward to going back there.”

The British Government, having lodged Jinnah in the palatial Governor-General’s House in Karachi, put their Deputy High Commissioner in reciprocal residence in South Court. It remained in British custody from 1948 until 1983.

Pandit Nehru tried to prevent South Court being declared Enemy Property. His successor Narasimha Rao was agreeable in 1980 for it to be used as the residence of the Pakistani Consul-General.  Gradually, though, an unforgiving Indian nationalism began to encroach upon Malabar Hill. Mount Pleasant got a new name: Bhausaheb Hirey Marg. South Court became an office of the Indian Council for Cultural Relations. Its garden became derelict. The walnut woodwork has now rotted. The Italian marble cracked and stained. Jinnah’s footprint in Malabar Hill has been erased. All that remains is the noise of squabbling about ownership and the echo of clockwork footprints on a marble floor.

Aijazzudin is an author and historian

He never liked pakistan and if he would have lived some more years he would have returned back to Mumbai , he felt bad living in pakistan a country so backward devoid of any charme , he died in just one year … poor man . This property must be made Holocaust museum of partition which he plotted in this house .

Was Pakistan really worth so much pain and loss?

Judge for yourself after objectively evaluating the existing conditions of the Muslims in India and the treatment being meted out to them!

He Quaid-e-Azam felt id was worth it. And recent events proved he was so right to give muslims a home land.

Fakir,you made us sad and mad,sad because he died on an unfinished agenda for Pakistan,mad because the obscurantists would block that agenda even now,example,Atif Mian

Such properties are historical legacies and must be preserved both in Pakistan and India. We have no right to complain if we cannot hand over the Hindu Gymkhana to our Hindu community.

Each refugee of the Partition was a Jinnah . I donot see any one crying for those millions of Jinnahs. In the end his own creation undid the most powerful muslim politician. and he could do nothing about it.