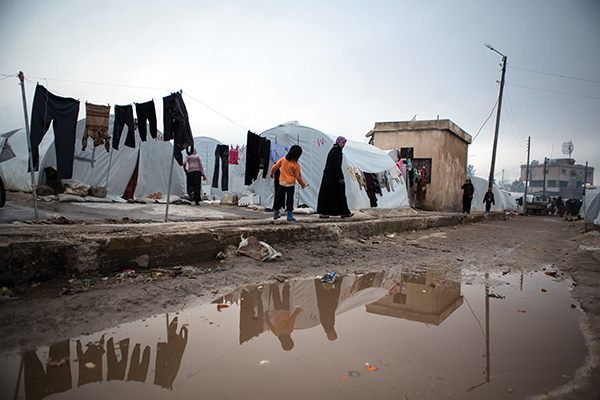 Our million children are caught up in the war in Syria. Rabia, 13, is one of them. Tall and gangly, teetering on the verge of womanhood, she sits shivering in a yellow T-shirt at the Al Marj settlement, close to the Lebanese-Syrian border. Home for Rabia was once a two-story house near Damascus. Now it is a tent shared with seven siblings and her parents. Rabia’s face is streaked with dirt, and she is tired and cold. She has just finished work, picking up potatoes that fall from a truck. Her typical day starts at 4 a.m., and she works a double shift that lasts about 16 hours, hauling potatoes into sacks. She gets paid about $8 a day.

Working means Rabia misses school. Back in her village, Hara al-Awamed, she was the best in her class and good at everything. Her favorite subjects were Arabic literature and math. But, like many children now living in the settlements—there are no official refugee camps in Lebanon—that was Rabia’s old life. Life before war, before her family relocated five times to escape shelling, before leaving behind her bedroom, her toys and her friends without packing a bag, before the bumpy truck ride into Lebanon. Before “half the people I know” were dead. Before her father was injured when shrapnel ripped through his skull.

The old life was laughing with her sister, Wala. But Wala, 14, got married two days ago to an 18-year-old Lebanese. Rabia is happy for her. Life in the settlement is tough: the children have nowhere to play, the bathing and lavatory facilities are poor, and sexual abuse is rampant. You can’t blame parents who want to marry off their daughters; they fear for their safety. Increasing numbers of Rabia’s girlfriends are getting married. Once in rural Syria, a girl got married at 16. According to UNICEF, the age is now dropping to 12 or 13. It is no secret that Lebanese men want to marry Syrian refugee girls. They work hard and don’t ask for anything.

Like most Syrian refugees in the predominantly Shia Bekaa Valley, Rabia is a Sunni Muslim. The Shia usually support Bashar al-Assad’s Alawite regime, but even her own people are now divided. Adults settle their political differences with violence, and the children follow suit, throwing rocks at each other.

The small tented school set up by a local Lebanese charity, Beyond, often descends into shouting and screaming matches. There is no room for the Syrian refugee children in the Lebanese school system. It can no longer absorb so many new arrivals. Rabia usually doesn’t have time for school, but now and then, if she is working a single shift, she can run home in time to sit in on a lesson in Arabic. “It’s so sad and frustrating,” says Maria Assi, a teacher. “These kids want to go to school. They come running out of the fields to go. But by the time they get here, we are usually finished.” Sometimes Assi stays on into the evening “to let these children learn.”

In this settlement, as in many others across Lebanon, Syrian children are a major source of cheap labor. They are the main breadwinners, since there are fewer men than before: some died in the Syrian conflict in March 2011, some are injured, and some have returned home to fight. Some are afraid of Lebanon’s notorious security services, so they lie low, while children trudge off to the fields. “When you get to a settlement during the day, there are no children,” says Soha Boustani from UNICEF. “You ask, ‘Where are all the children?’” Driving past the rolling green fields of the Bekaa, Boustani says, “You suddenly see these beautiful colors in the field. You think they are flowers. Then you get closer. They aren’t flowers. They are children working.”

Child labor is illegal in Lebanon, but the law isn’t enforced. The work the children do is dangerous. Rabia runs behind a truck picking up potatoes, but the driver cannot see them. “If the truck backs up, the children are crushed,” says Assi.

Inside Syria, one in five schools has been destroyed since the war started in 2011. Many children stopped going to school as soon as the fighting began. Parents who could afford to taught their children at home. Others simply stopped educating their children. As a result, an entire generation of Syrian youth is frozen. “My worry is they are losing not just their innocence and childhood, but also their education,” says Assi. Currently, of the 779,000 Syrian refugees registered with the United Nations High Commission for Refugees in Lebanon, more than half are children. The government claims there are 1.3 million refugees scattered across the country—a little more than a quarter of Lebanon’s population.

Some Lebanese are growing resentful of the Syrian arrivals as they compete for low-paying jobs. As the World Bank reported recently, the refugees are exacerbating an already slumping economy. Tourism is down, trade routes disrupted, and there are not enough jobs. “Since the outbreak of the civil war in Syria, the government of Lebanon has struggled to deal with the economic, social, and other consequences,” says Samir El Daher, an economic adviser to the Lebanese prime minister.

In the end, the children suffer. At the dusty settlement, where refugees pay up to $200 a month to pitch a tent, family life is drastically changing. Boys are becoming increasingly radical, filled with hate and revenge, and they want to fight the enemy. Girls are becoming workers and early brides. Rime Dagher, Rabia’s 12-year-old friend who works alongside her at the farm, comes from Homs. She has a long plait down her back and freckles across her nose. She looks like a child until she opens her mouth. Rime has not been to school for three years—since the day a shell landed near her house. She is horribly aware of her own loss. “Have I lost my future?” she asks herself. “I don’t like working. I’d rather be in school. But we have to be strong with what we are facing. If we are strong, we can overcome this.”

From Al-Majr you can see the mountains that separate Lebanon from Syria, but the refugees’ homes still seem a long way away. Homs, where Rime comes from, is now a ghost city where almost every family has lost a member to fighting, to illness, to war. But Rime, like Rabia, still wants to go back. But she is realistic. “If I go home someday, what will I find? It won’t be the same. People are dead. My school is destroyed. I know I will never find what I left behind.”

Another young friend, Layal, 11, arrives with a bag of fruit. What she misses most is her pet dog back home in Salamiah. “That dog was happiness,” Layal says. Picking up her bag to go back to work, she looks back and says, “There is no happiness here.”