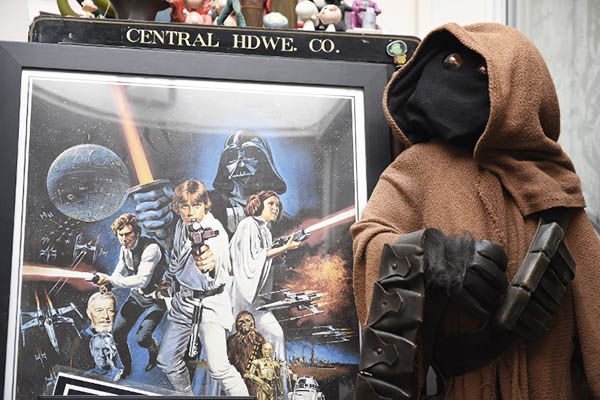 When Star Wars audiences were blown away four decades ago by its thrilling battles in space, they were also witnessing a big bang in special effects that is still felt today, as fans await the next installment in the blockbuster saga.

The original 1977 movie, which introduced the world to Luke Skywalker, Darth Vader and a mysterious power known as The Force, changed the way science-fiction films were made, paving the way for innovations in the field. “It woke up the visual effects industry,” Mike Fink, a Hollywood effects heavyweight who won an Oscar in 2008 for his work on The Golden Compass, said of the first film. “One of the things that’s always been true in films is that the story drives the technology. It took a film like Star Wars” to show that, Fink told AFP.

The script for the first film set “in a galaxy far, far away” confronted creator George Lucas with seemingly insurmountable technical challenges. “With Star Wars, I want to do an action picture. I want to do something where I can pan the space ship. I want to do quick cuts. There’s a lot of rhythm, a lot of pace,” Lucas recalled in a documentary several years ago. “There’s a lot of movement on the screen. I want it to be very cinematic, and at that point in time, that was impossible,” he added.

The creative impasse led him in 1975 to found Industrial Light and Magic (ILM), devoted to modernizing the special effects industry’s techniques. The company is now the standard-bearer in the sector. A group of young engineers and students worked day and night in a warehouse north of Los Angeles, letting their imaginations run wild.

Engineers worked with mock-ups and miniatures to bring to life the space epic that Lucas had envisioned. They experimented and came up with new animation, photography and graphics techniques that resulted in cutting-edge effects. Among the most revolutionary breakthroughs was the computer-controlled robotic “Dykstraflex” camera system. Named for its lead developer, John Dykstra, it allowed for seven axes of motion and the creation of flawlessly synchronized composite images—fantastic for those memorable space battle scenes.

Dykstra and his team landed an Oscar for best visual effects.

For Fink, the first Star Wars film “really revolutionized things by [having] machines operate other machines and using that to control cameras that make pictures.”

The adventures of Skywalker and Han Solo opened the door to a golden age in science-fiction filmmaking, a decade that included Alien, Blade Runner, The Terminator, E.T. the Extra-Terrestrial and Back to the Future. Later on, Jurassic Park, Titanic, Independence Day and Avatar from directors such as Steven Spielberg and James Cameron pushed the boundaries of what could be achieved.

In 1999, Star Wars: Episode I – The Phantom Menace, also written and directed by Lucas, made new headway in technological achievement. The team had a rough time recreating the surface of the planet Tatooine. At the time, standard operating procedures would have been to make giant models, or matte paintings. But neither was good enough.

In the end, it came down to a method that blended real photography and digital graphics—a technique that would later be used by Cameron to bring to life the world of Pandora in Avatar.

Now, the industry is watching closely to see what innovations director J.J. Abrams will bring to the table in Star Wars: Episode VII – The Force Awakens opening around the world next month. Diehard fans are hoping for major surprises, but so far, trailers for the film have given little away in terms of the special effects to come.

“I don’t know if he’s going to revolutionize the way visual effects are created,” Anthony Breznican, an Entertainment Weekly critic and Star Wars expert, said of Abrams. “He’s trying to go back to the way they were used to be made. I think really what he’s doing is taking glossy state-of-the-art digital technology and giving it a sense of realism and texture that the old models used to have,” he told AFP. The suspense will be over for fans in mid-December.

Fink however cautions: “If you don’t care about the characters, it doesn’t matter how good the effects are.”