Home Lightbox The Game Is Afoot

The Game Is Afoot 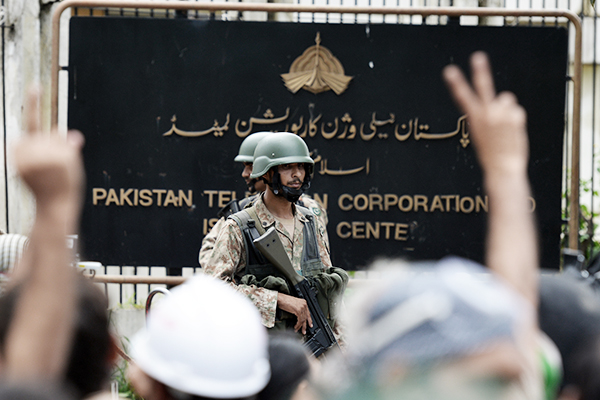 Tahir-ul-Qadri, Imran Khan and a cure worse than the disease

Pakistan is about to be plunged into another cycle of instability. Mobs have taken control of Islamabad’s Red Zone and, this morning, they entered and occupied the Pakistan Television Corporation building, claiming victory and briefly taking the state broadcaster off air. They only left when the Rangers and Army were called in.

The police have been criticized at both ends, for using excessive force as well as for wilting before the mobs. Notwithstanding the many structural and other flaws that beset the force, this criticism is harsh and uncalled for. The police force is in a Catch-22 situation. I cannot do better than to quote from Joseph Heller’s satirical masterpiece to describe its dilemma:

“There was only one catch and that was Catch-22, which specified that a concern for one’s safety in the face of dangers that were real and immediate was the process of a rational mind. Orr was crazy and could be grounded. All he had to do was ask; and as soon as he did, he would no longer be crazy and would have to fly more missions. Orr would be crazy to fly more missions and sane if he didn’t, but if he were sane he had to fly them. If he flew them he was crazy and didn’t have to; but if he didn’t want to he was sane and had to. Yossarian was moved very deeply by the absolute simplicity of this clause of Catch-22 and let out a respectful whistle.”

The mobs and their leaders have a simple script: do everything to discredit the political process of negotiation and aggregation. Keep upping the ante while claiming to be nonviolent. Scuffle with the police but respect the Army and also the Rangers since the paramilitary force is officered by Army officers. If the police stop them, they cry violence; if the police let them be, we criticize the force for being ineffective.

But in all this the real issues have gone into the background. What exactly are the Canadian and the former cricketer counting on? If reforming the system is indeed the desire, why are their actions contrary to that and threaten instead to plunge the country into instability by pulling in the Army? It boggles the mind to think that these people do not know this. In fact, many leaders within Khan’s party have expressed this privately to this writer and many others. It cannot be gainsaid that Khan is aware of this. In which case, and if he is indeed interested in reforms, why must he persist in his present course of action?

Khan has said that he will not leave until the prime minister resigns. The argument is that in the presence of Nawaz Sharif, no electoral reforms and investigations into Election Day rigging can be earnest. This, at best, is a flimsy argument; at worst it smacks of intentions other than what Khan mouths so vociferously.

The prime minister was elected by Parliament of which Khan and many of his party affiliates are members. This House has already categorically rejected the demand for the P.M.’s resignation. As for guarantees apropos of transparent investigations and reforms, those can be sought and gained. But that requires a process which Khan does not seem interested in. In effect, he rejects negotiations by sticking to a point that, constitutionally and legally, is nonnegotiable. This then raises question about the agenda he is carrying and which is not what he presents every 15 minutes to his followers from atop his container.

There is also the ‘minor’ problem of what transpired between the Army chief, Gen. Raheel Sharif, and the two mob leaders during their meetings on Aug. 29. If the Army is following orders from the elected government, which called it in under Article 245, why are statements from GHQ so ambiguous? Why have the cleric and the cricketer decided to ratchet up rather than climb down after their meeting with the Army chief?

On Sunday, Aug. 31, there was an emergency session of the Corps Commander with the Army chief in the chair. The press release in the wake of that session left many issues vague and liable to multiple interpretations. Come morning, we saw the cleric’s hordes storm the PTV building. This, again, raises many questions. What kind of game is being played? Is the game being scripted by the Army? Does the Army want to completely and irreparably discredit the political parties and the political process before it finally decides to enter the fray overtly, armed with any of the many options ranging from the extra-constitutional to the patently unconstitutional?

If it does come to this, that would be a cure worse than the disease. Also, if either of the two mob leaders thinks that he will get something out of that, he needs to tell us what he has been smoking. There’s nothing the Army can do, directly or indirectly, which the civilians cannot; and there’s nothing the civilians can’t do which the Army can. Politics is not about managerial skills. It’s about aggregating interests, often conflicting interests. That is what processes are for. Let no one be allowed to make a joke of this benighted country yet again.