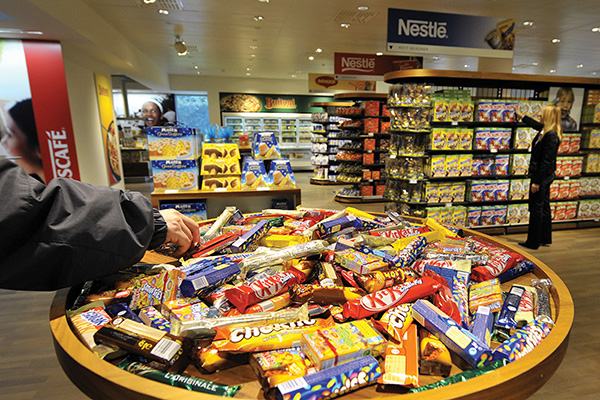 Why American confectioners don’t need a conspiracy to set prices.

Canadian authorities have accused the country’s four biggest chocolate manufacturers of colluding to fix prices. The allegations have a certain film noir flair—secret meetings between executives struggling to look casual, the head of Nestlé Canada handing an envelope stuffed with pricing information to a competitor.

You probably suspect that big corporations are colluding against you at every turn. But actually this is a bit surprising. For one thing, it’s illegal, and there’s a huge risk that one of your competitors will rat you out. (Cadbury has received immunity in exchange for informing the authorities. Nestlé Canada and Mars Canada have said they will defend themselves against the charges.) And for another, companies like Hershey and Mars are fiercely competitive with each other. The Emperors of Chocolate, Joël Glenn Brenner’s book on the two companies, paints a picture of a paranoid competition worthy of the CIA and the KGB. Has the bitter rivalry turned bittersweet? Should Americans, too, be worried that the fix is in on their chocolate fix?

For better or worse, America’s chocolate confectioners don’t have to resort to anything as crude as explicit price fixing. The candy counter is basically under the control of two players, Hershey and Mars, which between them have about 70 percent of the market for chocolate candy. When a market is that concentrated, there’s no need to skulk around industry conferences, having secret meetings in back rooms. The only thing you need to fix prices is … the prices themselves.

Say Mars wants to cut prices on its Bounty bars in order to take customers from the market-leading Mounds bar, produced by Hershey. What happens next? Hershey will probably cut prices to match. But the market-leading product often costs less to make than the others—you can do greater production runs and spread fixed costs like advertising and design across a larger number of sales. Without any backroom meeting, Hershey sends a very clear signal: cutting prices will cost Mars money, with no market-share gain. The next step in this dance is usually a restoration of prices to the old status quo. The more concentrated the market, the more the natural competitive pressure to lower prices is blunted.

So though they may be overpaying a bit for their chocolate bars, Americans probably don’t need to worry too much about a candy cartel. They can go back to worrying about what their candy bars are doing to their waistlines.