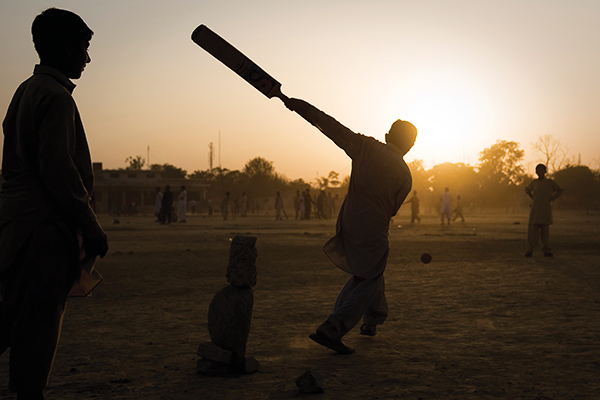 A close, caring look at cricket in Pakistan.

Pakistan’s cricket team has always played below its par, its batsmen sporadic in their ability to score and its fielders letting down the bowlers with holes in their hands. But Pakistan has always astounded its critics with spurts of brilliance no one could predict. When Pakistan visited England in 1954, Neville Cardus, the doyen of cricket writers, said the team was no higher in playing talent than a first-class county team and shouldn’t be given a Test march; but in the final Test at the Oval, England was trounced with paceman Fazal Mehmood taking 6 wickets for 53 in the first innings and 6 for 46 in the second.

Fazal’s was the first big milestone; in 1992, Imran Khan achieved the second one when he skippered the national team in the World Cup and won it against all odds. Fazal was a good-looking man, a bit of a ladies’ man in his prime, who turned to religion in later life. Imran, too, was a dashing fast-bowler whom the girls admired; he also turned to religion as he matured with experience.

Fazal’s father took part in a rebellion against the British Raj and fled with a group of insurgents to Afghanistan. He was in jail in 1927 when Fazal was born. The father of the great spiritual-feudal aristocrat Pir Pagaro was hanged by the British for raising the standard of rebellion in Sindh. But the Pir played school cricket in England and, on his return, set up the Karachi Gymkhana, where some great cricketers including the Mohammad brothers learned how to play, subsidized by the Pir. The nursery of Karachi Gymkhana was to be the maker of many great careers: the Hanif brothers, Wazir Mohammad, fast-bowler Khan Mohammad, Alimuddin, Amir Elahi, Imtiaz Ahmed, and Zulfiqar Ahmed.

In Wounded Tiger: A History of Cricket in Pakistan (635 pages, Simon & Schuster), Peter Oborne talks about another nursery, a small community in Lahore called Zaman Park “populated by the Pashtuns of Jullundur” who first featured in the All-Indian Cricket Team touring England in the 1930s, then dominated Pakistan cricket under three captains, all first cousins, who hailed from Zaman Park.

He writes: “Majid Jahangir’s home at Zaman Park in central Lahore would become one of the great seminaries of Pakistan cricket. Imran Khan, his cousin, was much later to emerge as Pakistan’s greatest-ever cricketer. Another nephew, Javed Burki, would captain Pakistan.”

Today, Imran Khan is challenging the political leaders of Pakistan with the kind of public support that could only come after his cricketing feats, including the 1992 World Cup, and his philanthropic works treating poor patients free at his Shaukat Khanum cancer hospital, and helping less privileged students at his Namal University in his father’s home city, Mianwali.

The latest Long March protest that has threatened the sitting government with “popular overthrow” for over three months started from Zaman Park. Imran often equates the philosophy behind his movement of a new political awareness among the middle-class youth with his sportsman’s determination to stand firm and win. Adored by men and women in a segregated society, he has become the new hope of the rising classes.

Oborne quotes from tribal historian Hussaan Zia about the previous home of the Zaman Park “Pathans” in Jullundur, now in Indian Punjab, where the Maharaja of Kapurthala had encouraged their youths to take to sports. But before Jullundur, their home was in Kaniguram, an idyllic settlement in the South Waziristan tribal agency. Fellow-tribesman Zia, an ex-deputy naval chief, tells us about it: “Kaniguram is located about 20 miles north of Wana in South Waziristan. Two perennial streams pass through it and the hills are covered with thick pine forests. The town itself is about 7,000 feet above sea level.”

Imran’s tribesmen in Zaman Park trace themselves to their ancestor, Pir Roshaan, the inventor of the Pashto script, which ensured Pashto literature, and the pioneer of the Roshanya Movement. The late Khyber-Pakhtunkhwa politician Khan Wali Khan mentions Pir Roshaan as one of the pillars of Pakhtun nationalism in his 1986 book, Facts Are Facts. Imran also talks about Pir Roshaan in his 1993 book, Warrior Race.

Oborne notes the rise of Pakistan cricket from its origins in the Northern India cricket team, which gave Zaman Park its three cricket captains as well as the first captain of the national team, Abdul Hafeez Kardar. The inspiration in Zaman Park was Dr. Jahangir Khan, the all-India all-rounder whose career as an educator bred a parallel love of learning in the tradition of the “wrestler-philosophers” of Central Asia. Khan still figures as a wrestler in the old boys’ photo gallery at Government College, Lahore. He was a Central Asian tribal Ghuzz, like Urdu’s greatest poet, Mirza Ghalib.

Oborne notes: “Jahangir Khan, as a young man, had played in India’s first-ever Test match, against England at Lord’s in June 1932. Four years later, while representing Cambridge University at Lord’s, he bowled a historic lethal delivery. Directed towards the MCC batsman Tom Pearce, Jahangir Khan’s fast-medium ball struck a sparrow on its way to the stumps. The bird collapsed dead on the wicket, and its stuffed body has been preserved at the Lord’s museum ever since.”

In a passage in the book, two great Pakistanis make their debuts together with Jahangir Khan who was leading Northern India against Southern India. Kardar made 94, and 17-year old Fazal Mehmood at No. 11 made 38 before, as bowler, getting India’s cricketing legend Lala Amarnath caught by Jahangir Khan in the slips. Kardar was to rise after 1947 as a great leader of the national team whose authority would recall that of Imran Khan in the 1980-90s. Equally, Fazal preceded Imran’s charisma by giving Pakistan its first Test victory against England with his unplayable “leg-cutters.” Foreshadowing Imran, Kardar later dabbled in politics but not with the same intensity of purpose as Imran in our day.

Oborne points to an interesting detail in Jahangir Khan’s career. On July 9, 1947, the barrister Sir Cyril Radcliffe was appointed to preside over the India-Pakistan boundary demarcation less than six weeks before Independence. Radcliffe “had never visited India, let alone served there, and did not possess even the most basic understanding of India’s demography or cultures.” Oborne reveals: “According to Majid Khan, his father, Jahangir Khan, served on Radcliffe’s commission. He never spoke about this episode for the rest of his life.”

The book mentions Dr. Farrakh Khan of Zaman Park—a first cousin of Imran and Majid—who was supposed to have imparted the secret of the “reverse swing” to the great Pakistani pace bowler Sarfraz Nawaz, a veteran of 55 Tests from 1969 to 1984 when pace was languishing in Pakistani cricket. With his reverse swing he was to be finally counted among the great pacemen of our times: Fazal, Imran, Wasim Akram and Waqar Younis.

It is not certain if Farrakh taught a 17-year-old Sarfraz the secret of the reverse swing, but Farrakh was in the Pakistan Cricket Eaglets Team that toured England in 1959. As a senior, he played at the Lahore Gymkhana, changing the fast out-swing of his youth to wicket-taking leg-breaks in friendly matches. Farrakh became a well-known surgeon in Lahore, and authored many books, including one on Murree, where he had begun a career of mountaineering and contracted a passion for archaeology. He died in Zaman Park earlier this year.

On surer ground, it was Sarfraz who was to create three great heirs of his acquisition: Imran, Wasim and Waqar—the latter two setting wicket-taking world records with their reverse swing, half of the ball shined with constant rubbing. They ended the “pace drought” Pakistan was faced with, playing, in the last resort, Azeem Hafeez as a pacer “who had a congenital deformity: a foreshortened right arm ending in a hand missing four fingers.”

Wasim had a dream debut. Not yet in the first team at Islamia College, Lahore, he got spotted during a trial match against visiting New Zealand in Rawalpindi in 1984 when he took 7 for 50, and was swept into the party for the return tour by Pakistan of New Zealand, “displacing the unlucky Tahir Naqqash who had already been selected.” Waqar, another teenage prodigy, was discovered on television by Imran who picked him for the 1989 series against India before he was 18. He responded by dismissing fellow-teenager Sachin Tendulkar, and taking four wickets in the match. He went on to form the two Ws that bowled Pakistan to high status as a cricketing country.

The reverse-swingers of Pakistan kept mum about their art, unlike Saqlain Mushtaq and Shane Warne: “Saqlain Mushtaq exploited the mystique of his ‘doosra’ and even claimed a further invention, the ‘teesra,’ matched by Shane Warne’s announcement of the ‘zooter.’ Imran, Wasim and Waqar let their wickets speak for themselves. They rarely, if ever, attributed their victims to reverse swing.”

Oborne talks about a similar earlier phenomenon comparable to the three cousins of Zaman Park: the Mohammad brothers from Junagadh, who, inspired by a gutsy sportswoman mother, Ameer Bee, a champion at badminton, shaped Pakistan cricket.

Another cricket prodigy from Karachi dominating the story of cricket in Pakistan is Javed Miandad who shone during the New Zealand tour of Pakistan in 1976: “Javed Miandad—only 19 years old and playing in his first Test—came together with Asif Iqbal to add 281 in an electric partnership for the fourth wicket. Miandad took less than three hours to score his century and was eventually dismissed for 163.” Thus began the career of Pakistan’s greatest batsman whose agility also became a rebuke to teammates who slouched in fielding.

Then there is the story of the grit and determination of Imran Khan in the book that foreshadows the redoubtable politician he has become today often ignoring the odds against him to a fault but appealing to the combative instinct of the masses.

The beginning of the 1980s saw Imran in his prime but handicapped by a leg injury that prevented him from bowling. If he was not to bowl, could he be included in the team going to Australia in 1983? But Nur Khan, the-then chairman of the Pakistan Cricket Board and a former Air Force chief, was a risk-taker, like Imran, and made a controversial decision: he removed Zaheer Abbas, the “dull, defensive” skipper and gave the team to Imran who had been advised by the doctors not to play at all. Nur Khan had overridden the selection panel, and Imran led the team as “non-bowling” captain.

Described as Imran’s “darkest hour,” the tour took a nosedive as Imran sat out. But in the fourth Test he defied the doctors and returned as a batting captain only. Oborne quotes him as feeling nervous going into the Test match with a game leg: “Yet he made a crucial 83 in the first innings, and a match-saving 72 not-out in the second. These runs meant that he joined the small band of all-rounders to score 2,000 runs and take 200 wickets in Tests.”

The author has delved into the mystique of Zaman Park, missing very little. If you visit the place today you will meet other great people there, like lawyer-politician Aitzaz Ahsan, a Warraich Jat from Gujrat, whom the Pathan community has learned to respect because of his integrity and courage, not least because his father was also such a model citizen, a political figure caring for his sporting neighbors who included Muhammad Niaz Khan, captain of the national hockey team at the Helsinki Olympics in 1952.

Oborne has written a big book out of a feeling that Pakistan has been treated unfairly by other cricket writers. He even senses prejudice in the accounts written by them and has decided to tell the real story without, however, hiding the warts. That is fair enough. The book is a keepsake for a nation crazy about just one game. Needless to say, it is a bestseller in Zaman Park.