Home Lightbox The Hero We Deserve

The Hero We Deserve 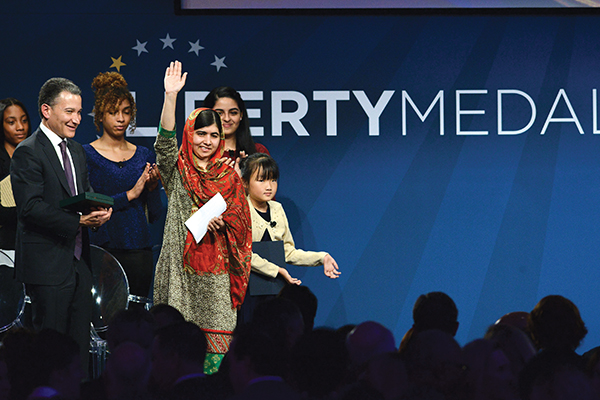 Our Nobel laureate Malala is no accident.

One of the many things to celebrate about our Malala Yousafzai co-winning the 2014 Nobel Peace Prize with India’s Kailash Satyarthi was the joyous unanimity it produced among Pakistan’s politicians. From Prime Minister Nawaz Sharif to Imran Khan to Bilawal Bhutto Zardari to the traditional killjoys of the Jamaat-e-Islami, the reaction to the Norwegian Nobel Committee’s announcement of Oct. 10 was one of pride and cheer. The Pakistan Army, which very publicly supported and aided Malala after she was shot in the head by the Taliban two years ago in Swat, was also exultant.

But the cynics couldn’t keep their peace, not even on the day that Pakistan won its second Nobel and Malala, at 17, became the youngest ever laureate. Indeed, a South Asian-looking reporter questioned the wisdom of the Nobel Committee’s decision to honor Malala during the live announcement. In Pakistan, social media skewed indignant almost immediately, siding with the heretic reporter. What has Malala done anyway to win what is arguably the world’s most prestigious award? Why has the ascetic philanthropist Abdul Sattar Edhi, working so effectively and for so long for the poor of Pakistan, been ignored yet again? Besides surviving an attempt on her life, these people believe Malala hasn’t actually done anything to deserve the Nobel.

The cynical take on Malala is very likely unrepresentative of Pakistan as a whole. But, naturally, this viewpoint is embraced by both the militant left (which views her as a passive vessel for Orientalist visions of the helpless oppressed Muslim woman) and the militant right (which sees her as an upstart who has gotten too big for her boots). For both these extremes, Malala is one without achievements, a contrived symbol foisted upon Pakistan. But woe betides the country that panders to its militant fringes. Malala deserves all the honors she has received, including the Nobel, because of all she has done prior to and after being nearly killed and for all that she so gracefully represents.

Malala was made famous by the Pakistani media and honored widely at home for good reason, before the Taliban attacked her school van. In 2009, when Pakistan cravenly surrendered Swat to the Taliban, who promptly took to bombing schools and banning women from sight, she stood up and she spoke up. She showed more guts than any man or woman in the national and Khyber-Pakhtunkhwa assemblies, legislatures that endorsed the white-flag deal with the militants. She took a stand not just for her own right to an education but against the state’s shameful bending at the knee to the Taliban.

But if what Malala did before the attack on her was courageous, what followed was more amazing still. It’s one thing to stand up for your rights; it’s quite another to forgive your attackers and to see in them the seeds of a common humanity. Since her relocation to Birmingham, U.K., Malala has become a global ambassador for girls’ rights. Her Malala Fund is helping schools in Pakistan, Jordan, Syria and Nigeria. She’s spoken at the U.N., met U.S. President Barack Obama and Queen Elizabeth, and spoken against U.S. drone strikes in Pakistan. Davis Guggenheim, who won the Oscar for another Nobel Peace Prize winner Al Gore’s An Inconvenient Truth, is soon releasing a documentary on her that’s sure to see her on stage in Los Angeles. Both her books are bestsellers. In short, Malala has brought front-page prominence to the education of girls, a pressing Third World problem.

Islam is a religion of peace and humanity. And Malala embodies this. She has dedicated her young life to working for children’s rights. The uncharitable criticism that has been unleashed at her represents the worst of our society, and our religion. Her response—of compassion, decency, intellectual curiosity, honesty—represents the best of our society and religion. Malala is also an able ambassador of Pakistan. For years, Pakistan has tried, and failed, to convince the world that it is a victim, not a patron, of terrorism. Malala’s ordeal, now known globally, assists Pakistan’s case more effectively than any politician’s speech or sound bite ever has or ever could.

Malala should have won the Nobel last year, but, incredibly, she was deemed too young by the Nobel Committee. Yet, a year later, she is still a child. And being so young makes her accomplishments and courage more worthy of recognition and celebration. How many people in Pakistan, much older than she, have faced the menace of militants with as much nerve and compassion as she has? Malala deserves our admiration because she used her trauma to teach Pakistan, and the world, how to respond to adversity. She is no accident. She is the hero our collective shortcomings created; she is the light that fights our darkness.

A little champion to be proud of!