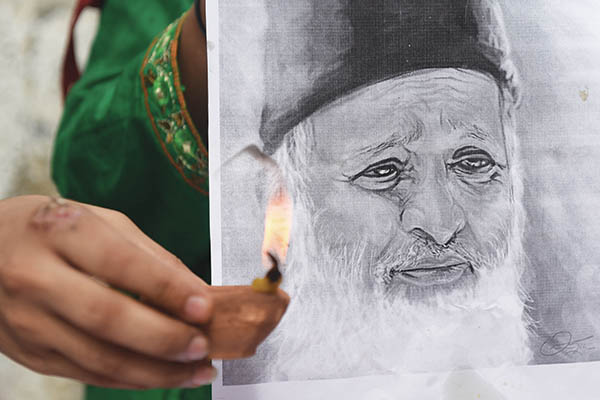 Can anyone in Pakistan fully understand the country’s greatest humanitarian?

The other night, my father’s friend had a terribly vivid dream about my sister. “I saw your youngest daughter badly hurt,” he told us. The next day, hoping to ward off any ill omens, my father prayed for my sister’s safety and deposited a small donation in her name at the Edhi Center near our home in Karachi. I never met Abdul Sattar Edhi, and with these offerings of sadqa [alms] to his organization, I hoped I would never have to. Like most people I know, I have been fortunate enough to never require the Edhi Foundation’s services.

Over the years, I have visited the local Edhi Center many times. I didn’t realize it at the time, but each visit taught me to count my blessings: my three nephews came into the world in perfect health, my father celebrated his 65th birthday, my brother-in-law escaped a factory fire unhurt, my sister pulled through a major surgery, I got married, and later, my husband was pulled out of the mangled remains of his car after an accident, wounded but alive.

When Edhi died late on July 8, I spent hours scrolling through hundreds of personal anecdotes about the humanitarian and his Edhi Foundation on social media and felt a twinge of envy. Why hadn’t I ever tried to meet him? The man was a cipher. How could anyone be that good? In his autobiography, A Mirror to the Blind, Edhi tells narrator Tehmina Durrani that he had received complaints about his foundation’s refusal to distinguish between Muslims and non-Muslims. “Why must you pick up Christians and Hindus in your ambulances?” he was asked. “Because the ambulance is more Muslim than you,” he replied. That tart response is fast becoming the stuff of legend, as it encapsulates Edhi’s humanity in a country that appears to be rapidly losing its own. “We would call on Edhi sahib automatically whenever something happened,” a member of the minority Ahmadi community in Karachi told Newsweek when I recounted this story. “Other ambulance services would not help us if one of us was injured or targeted in a shooting. They would either make excuses and say that no ambulances were available, or they would promise us that they were dispatching someone and then just wouldn’t show up.”

This man, who wishes to remain anonymous for fear of his own safety, says a recent example of the Edhi Foundation’s impartial benevolence was the targeted killing of Dr. Khaliq Bashir outside his clinic in Sikandar Goth last month. After several rescue services refused to transport Bashir’s body to hospital, the deceased doctor’s friends turned to Edhi. “There was a ticker running on the news that an Ahmadi doctor had been shot, and I suppose they figured out that’s why we were calling,” he explains, adding that many Ahmadi families in the urban metropolis are often refused funeral transport for themselves or the bodies of their loved ones. “But Edhi never refused us.” The more I learn of him, the less I understand how a place like Pakistan can simultaneously produce a man like Edhi and those who made his work necessary.

On the night Edhi died, a call to commemorate him by naming prominent airports and stadiums after him swiftly gathered support online, ignoring the philanthropist’s desire to wipe out his own name: “We do not need Edhi as an exception. We need mankind to arouse the Edhi in them,” said a sign he had personally posted outside his first dispensary in Karachi’s Mithadar locality. There were also feverish predictions that thousands would swarm to his funeral prayers the following day, with some saying it would be the biggest janaaza in the country’s history.

The funeral prayers were to take place at Karachi’s National Stadium after the afternoon Zuhr prayers on Saturday, July 9. Edhi would receive a state funeral, Prime Minister Nawaz Sharif promised, with honors that had been accorded to only two men before him: Pakistan’s founder Mohammed Ali Jinnah and military dictator Zia-ul-Haq. There would be a 19-gun salute. The government was praised for “doing the right thing.” But in all the pomp, we apparently forgot that this was a man for whom the guns stopped. During spates of violence in Karachi, he recalled in 1996, “I would arrive in the midst of heavy machine gunfire between the police and tribal dacoits, and announce on a loudspeaker, ‘This is Edhi…’ They would cease fire until bodies were carried to the ambulance, the engine would start and shooting would resume.”

Could Pakistan—the same country in which thousands turned out to ‘honor’ a self-confessed murderer just four months ago—possibly be capable of commemorating a humanitarian of Edhi’s stature?

Thinking I was being cynical, I resolved to attend the funeral prayers to prove the country’s conscience had not died with Edhi. What would it be like, I wondered, to witness a rare moment when the entire country unites in praise of a fellow Pakistani?

On that overcast day, with the sky itself in apparent mourning, I sped toward the stadium and fretted about the number of people that would be there. “Be careful with your wallet and phone,” I reminded my husband, positive that such a large crowd would attract pickpockets. I wondered if I would make it in time before the gates closed or if the roads would be choked with those trying to pay their last respects to Edhi.

But the road to the stadium was clear, dotted with paramilitary Rangers personnel and policemen directing traffic. They waved us toward the nearest public entrance, and three men checked the contents of my bag before we were allowed to pass through metal detectors and stand before the bleachers. It was 11:40 a.m., and the Rangers outnumbered the scattered mourners in the stadium. Three men trekked through the bleachers, and were patted down by a security official before they weaved down to a policeman guarding the chain-link entrance to the grounds. At the first checkpoint, an official stopped me with a flick of his scanner. “Can I go inside?” I asked. He shook his head. “If this is the men’s section, where can the women go?” I persisted. “You’re the first woman that’s come here today,” he said, shrugging. Another official overheard the exchange. “Why are you here?” he asked. “I just wanted to see,” I faltered. How could I explain that I needed to see if I could better understand a man by meeting those who paid tribute to him? The official paused. “It should be all right if you stay on the sidelines,” he said. 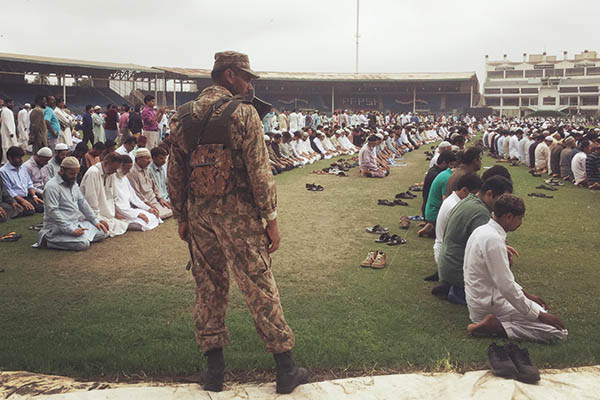 My husband walked off to join one of the lines forming behind a row of military personnel in crisp white uniforms. A length of barbed wire separated these VIPs from the crowds. A light drizzle started. “Excuse me. Who are you?” a Rangers official asked me. He moved to the side as another official corralled cameramen away from the crowds and toward the exit. “Move it!” he barked at a photographer lingering to take a picture of the men in white, their starchy uniforms slowly wilting in the misty rain. “Hurry up, daant khaanay ka time aagaya hai,” snickered one of the journalists at the officials’ belligerence.

“Miss? Which department are you from? Are you from the media?” the Rangers official inquired.

I turned away from the photographers. “No, I’m not a reporter and I have no department,” I said. “I’m just here with my husband.”

“You can’t stay on the grass,” he said. “Please wait behind the fence.”

The stone bleachers at National Stadium are covered in bird droppings. Small mounds of feathers lie swept to the side, and the rotting heaps give off the scent of chicken shit. Flies settle on you the minute you stop pacing. As the call for Zuhr prayers was announced, dozens of men streamed into the stadium and performed their ablution using large water bottles. Their rubber slippers slopped in the puddles of water they left behind. I stood to the side and watched the hundreds of men in prayer, their backs cresting and curling in tandem.

“Excuse me, miss,” yet another Rangers official beckoned me from behind the chain-link fence. “You need to move away. You can’t stand here.”

“But your colleague said I could wait behind the fence,” I explained.

“Some of these men are complaining that they can see you standing in front of them as they pray,” he mumbled. “You can’t stand by the side either during the namaaz.”

A helicopter circled overhead. Cellphones turned to the sky, some men took photographs of it. A latecomer paused to take a selfie with the crowd of men prostrated in prayer behind him. “The Army chief is on his way,” a friend texted. My phone’s network services were promptly shut down. I could hear the wails of several ambulances. “Do not try to cross the barbed wire,” a voice pleaded over a crackling megaphone. “Please be patient.”

I saw my husband stride toward me. Most of the people, he said, weren’t even bothering to stand together to pray. Security had been tightened since we arrived at the stadium over an hour ago and we walked past men in two long lines clutching their National Identity Cards. At the gate, a woman with greying hair flagged me down. “They aren’t letting me in,” she said. A young girl stood beside her. “My daughter and I want to go inside, but they’re saying we aren’t allowed to.”

I would tell him, I thought desperately, that this was the funeral for a man who had stood shoulder-to-shoulder in prayer with young women at his shelters. How could they refuse to let women in?

But I was just inside, I insisted. They let me in earlier.

“Abb manaa hai [It is now forbidden],” he responded, looking the other way.

Maher is a Karachi-based freelance journalist. She can be contacted on Twitter @SanamMKhi