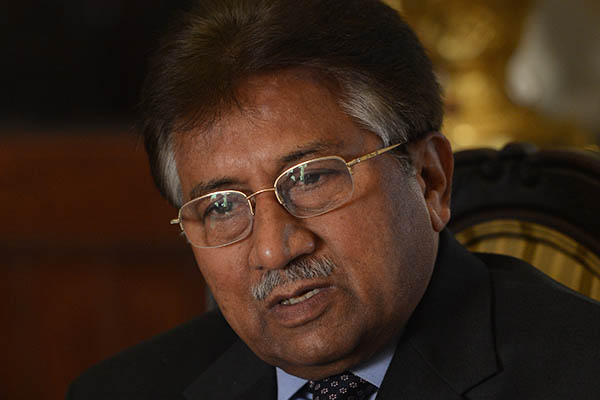 Top Pakistani journalist Zahid Hussain has written the best account so far of America’s war in Afghanistan and Pakistan’s role in it. No-Win War: The Paradox of U.S.-Pakistan Relations in Afghanistan’s Shadow (OUP) ends up being the best documented account of what transpired between the two “allies”—Islamabad and Washington—while fighting the Taliban and Al Qaeda.

Then-president Pervez Musharraf wanted to remove a “too jihadist” Gen. Mahmud Ahmad from the ISI, Pakistan’s premier spy agency, and offered to elevate him to the post of chairman of the Joint Chiefs Committee, which he refused. Mahmud was one of the strongest voices against abandoning the Taliban and had developed a close affinity with them as head of the ISI. He could not be trusted with Musharraf’s new policy. The book explains how far the general had drifted from his “liberal” boss:

“Musharraf went to Mahmud’s house with his wife. There, he got an earful from Mahmud’s wife. ‘You owe your power because of my husband,’ she shouted. That was the end of a long friendship. After retirement, General Mahmud had turned to a fundamentalist version of Islam. He grew a long beard and joined the Tablighi Jamaat (Society of Preachers) which is an Islamic missionary movement that focuses on exhorting Muslims to return to practicing their religion as it was practiced during the lifetime of Prophet Muhammad (PBUH) particularly in matters of ritual, dress, and personal behavior. It has been deemed as one of the most influential religious movements of 20th-century Islam. Mahmud ‘rediscovered’ religion mid-career though socially he appeared moderate. He was extremely well-read and would often quote Clausewitz, Bertrand Russell, and Aristotle during his interaction with American officials.

“His political views, though, were religiously inspired. He also had the reputation of being a ‘closet Islamist’ and a strong proponent of a jihadist foreign policy. Support for militant groups increased during his tenure as ISI chief. General Mahmud never appeared on any public forum post-retirement. One of the architects of the 1999 military coup, he opted for a low profile and started working on his favorite project—a book on the 1965 war.”

Mahmud typified many Army officers who got Talibanized and “spiritually” joined Al Qaeda in its Islamic war against the United States, which never stopped suspecting Pakistan of playing the double game of fighting terrorism while aligning with the Taliban and Al Qaeda. This is what happened when an “eccentric” officer actually feared the Taliban-Al Qaeda combine as an anti-Pakistan venture:

“General Ehsanul Haq, DG ISI, was very concerned about Al Qaeda’s growing activities in the tribal areas. He was receiving alarming reports from ISI agents on ground. He was one of the few officers, in the senior hierarchy, who knew the region well. He had served as brigade commander in Kohat and later as Corps Commander Peshawar before getting the new ISI assignment. The Americans seemed quite pleased with his appointment and felt he was a man they could work with. CIA Director George Tenet found him to be a good partner.

“General Ehsan, however, had a serious problem with the Army GHQ who did not believe, or were in a state of denial, about Al Qaeda reorganizing in the tribal areas. General Yousuf Khan, vice chief of Army Staff, and Lt. Gen. Shahid Aziz, Chief of General Staff, dismissed the information as alarmist. General Ali Muhammad Orakzai, the commander of Pakistani forces in the area containing Waziristan, dismissed the reports of Al Qaeda’s resurgence. General Orakzai considered the American and ISI warnings about Al Qaeda to be mere ‘guesswork,’ saying that his soldiers had ‘found nothing’. There was speculation that he deliberately ignored the large presence of foreigners since he feared that action against them would spark tribal uprising.”

The case of the “transformed” general, General Shahid Aziz, became known from his book Yeh Khamoshi Kahan Tak (How long this silence?), a rambling low-IQ account of his “personal” metamorphosis under Islamic inspiration. The book went public with the “secrets” of the 1999 Kargil Operation conducted by the Pakistan Army against India, the first act of war under civilian rule that brought yet another discomfiture for the people of Pakistan to bear.

Before the book came out, Aziz was paraded by keen anchors on TV programs luxuriating in the new scandals attached to the discredited ex-Army chief Musharraf, who would a mere year later go into self-exile, as returning to Pakistan would risk him being arrested for murder by the state or being killed by the Taliban. Of Kargil, Aziz claimed in an interview that “It was an unsound military plan based on invalid assumptions, launched with little preparations and in total disregard to the regional and international environment.”

Author Hussain reveals the jihadi martyrdom of Shahid Aziz in his book: “General Aziz joined the militants fighting the U.S. forces in Afghanistan, where he was reportedly killed in a drone strike.”

Husain Haqqani, writing in The Print on May 27, 2018, however, added more detail in his version of what happened: “After retiring from the military, Aziz was appointed chairman of the National Accountability Bureau, a post he left in May 2007. His heart, however, was in jihad. General Pervez Musharraf, under whom Lt. General Aziz served in top positions, recently said in a television interview that he had learned about Aziz growing a long beard, going to Syria to fight alongside ISIS or some other Jihadi group, and being killed there. Other reports suggested that he had gone to Afghanistan several months ago ‘to compensate for what he had done in favor of U.S. troops’ and it was in Afghanistan that he died.”

Author Hussain believes that in some cases Pakistan’s security agencies were close to the enemy America was hunting for in Pakistan’s border areas. He also notes an intense anti-Americanism among senior Army officers who tended to make Army chief General Musharraf feel isolated. Out in the general public, too, the war was not Pakistan’s to fight, no matter how deeply the jihadi “guests” undermined the state’s sovereignty:

The book notes: “A poll by Gallup Pakistan in 2009 found only 9 percent of Pakistanis in favor of the American attacks and 67 percent against, with a majority ranking the U.S. as a greater threat to Pakistan than its arch-rival India, or Pakistani Taliban. The growing public resentment led many Pakistani political figures to publicly condemn the operations.”