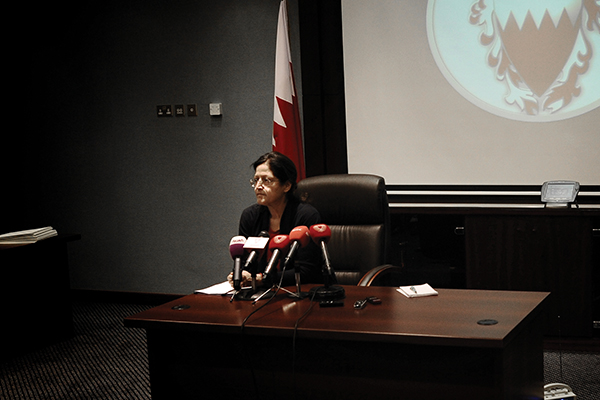 Sameera Rajab is everything you wouldn’t expect from an official government spokesperson in a Gulf country: She’s a woman, a mother of three girls, a Shia, and the first cousin of one of her country’s main opposition leaders.

Rajab is no diplomat. A former colleague of hers says Rajab is not afraid to pick fights. “Sameera is like an iron lady. She has no issues to fight for her beliefs and principles.” For this, Rajab has been attacked verbally many times. A Molotov cocktail was also once thrown at her house. A former journalist, Rajab was appointed by the king to become a member of the Shura Council until she was named Minister of State for Information Affairs last year. Her new task is to reform the media in Bahrain. “I know what it is to be a journalist. I know what the challenges are, but also what the ground rules of fairness and ethics should be,” she says.

She does not hide her displeasure with Western media and human rights organizations for, she claims, their slant toward Al Wefaq, the main opposition party. “They were the ones who voted against the right of [a Shia] woman to get a divorce, even when she lives in an abusive marriage,” says Rajab, “Do you call this democracy or human rights?” Under an Al Wefaq regime, a woman like Rajab would never be considered for a government post, she says. Rajab also believes religion should not play a role in politics and is every person’s private business.

Born in 1954, after finishing schooling in Bahrain, Rajab studied economics in Beirut for three and a half years. It was then that she met her husband, a member of Bahrain’s Sunni ruling family. From 2000 onward, she wrote for Akhbar al Khaleej, where she once raised the question of whether former Iranian president Ahmadinejad was of Jewish descent. Iran protested and the paper was banned for one day, “after we had published the article,” she said, smiling.

How about freedom of speech in Bahrain today? Wasn’t her cousin Nabeel Rajab in jail because of that? “No, no, nobody is in jail because of freedom of speech also not my cousin,” she said, “He is not a human rights activist, he is a political activist with the agenda to create an Islamic state in Bahrain.” (International human rights organizations say Nabeel was jailed for tweeting comments the authorities found to be insulting toward Sunnis.)

It’s no easy job serving as a spokesperson for a state surrounded by turmoil. “I think the people are tired. They see that the ‘Arab Spring’ has only brought chaos in the Middle East,” she says, “the only way for all the parties is through dialogue.” She adds: “I am not saying that everything that has happened in Bahrain is right, mistakes were made, but we are willing to work on them unlike other countries which have even worse track records in human rights violations than us, even in the West.”