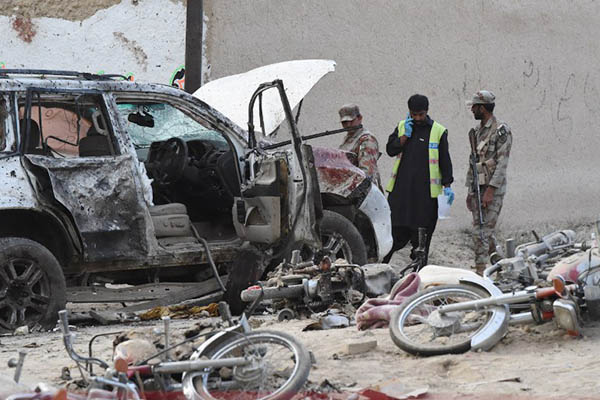 Does Pakistan have the most to fear from the militant group’s ‘Khorasan’ chapter?

On Friday, the Islamic State militant group claimed responsibility for a suicide bombing in Mastung, Balochistan that left 26 people dead and another 40 injured. Jamiat Ulema-e-Islam (Fazl) parliamentarian Maulana Abdul Ghafoor Haideri, currently deputy chairman of the Senate, was among the injured. The Islamic State has, since its expansion into the ‘Khorasan’ region comprising various South Asian states, killed Pakistanis across the country and has succeeded in recruiting dozens of young boys and girls to their cause. But while the world is largely united in the fight against Islamic State in Iraq and Syria, its view of the Islamic State of Khorasan is more mixed.

Calling I.S. “the wrong enemy,” an Afghan analyst in The New York Times claims the Taliban are a worse menace to Kabul’s security. New Delhi, too, has claimed that only 142 Indian citizens “can be confirmed to have affiliated with I.S. in some way,” and it is not a major threat. America, however, fears the growing global outreach of I.S. and does not wish to abandon the fight against it. According to the U.S. military’s estimates, I.S. in Afghanistan now has 600 fighters, down from 3,000 in 2016. Most of these are believed to be members of the Pakistani Taliban who were forced to flee their strongholds in Pakistan’s tribal areas following the launch of military operations targeting them there. Observers have used this makeup to allege that I.S. is more dangerous to Pakistan.

Kabul is right to be more worried about the Afghan Taliban. The militants are widespread across Afghanistan and still possess the ability to hold and control nearly half of the country. For Pakistan, the situation is a bit more personal.

The first chief of I.S. in Afghanistan was from Orakzai Agency and his 12-person shura (council) counts nine Pakistani nationals as members. The message to Pakistan is quite clear: you can officially deny our presence, but we have the ability to kill in all parts of Pakistan. Despite its recent origin, I.S. has reportedly recruited widely in Punjab (Sialkot) and Sindh (Karachi-Hyderabad) while the tribal areas supply the main force of its ex-Taliban killers. The ultimate factor of its gathering dominance was the money coming in from its Syria- and Iraq-based leadership. With that money slowly drying up, the group could soon face the same troubles as Al Qaeda following the killing of Osama bin Laden.