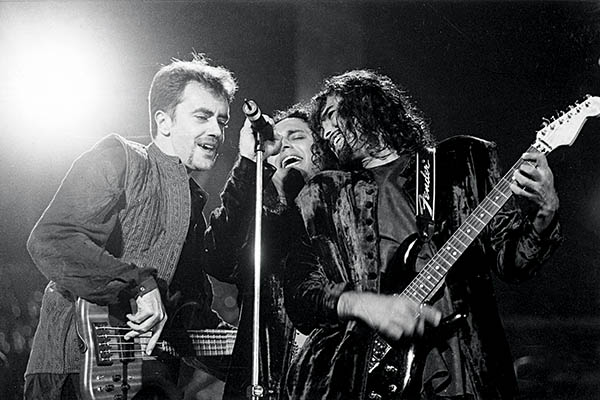 A look back at the making—and unmaking—of Junoon

For a band whose birth “wasn’t really scripted,” according to lead guitarist Salman Ahmad, Junoon seems to have managed a long, if occasionally ragged innings. This month the subcontinent’s only mega band turns 20. In a business where fame ordinarily lasts for 15 minutes, that’s a few lifetimes’ worth. The milestone warrants a revisit of Junoon’s musical legacy even if its former lead singer, Ali Azmat, caustically asks: “What is the celebration all about? The band hasn’t been active for almost 10 years.” Ahmad, who has been making several appearances as Junoon’s subsequent front man in concerts from Kashmir to the Nobel Peace Prize ceremony in Oslo, may beg to disagree.

In some ways, Junoon was a product of the still-lingering tensions between Ahmad and Azmat, two rather individualistic men, with then third member, bassist Brian O’Connell, keeping the peace. In better times it has been a remarkably creative tension, leading to outstanding, memorable music and live performances that brought the house down 10 times over. In lesser moments it has led to a clash of egos and possibly musical space.

Today Azmat accuses Ahmad of “vetoing” his musical ideas: “I was constantly told this can’t happen, this isn’t a Junoon song. You can’t cure that kind of damage.” Ahmad contends that he “composed 99 percent of the songs” on his own, which may have also been a bone of contention. These “unresolved issues,” among many that Azmat refers to, have meant that Junoon’s 20th anniversary concert in New York City, where Ahmad and O’Connell both live, is proceeding without the lead singer on their first seven albums from 1991 to 2003. “I did reach out to Ali to ask him to take part, but the answer was a negative,” Ahmad told Newsweek Pakistan.

Regardless of the strained relations between the two, Junoon’s body of work is monumental. The catalog is worth over 150 songs, much of it hitting the mark and some of it creating Pakistani music history.

It was 20 years ago on Sept. 30, 1991, that Junoon released its self-titled album through EMI Pakistan, a veritable paean to good old fashioned rock ’n’ roll. If original boy band Vital Signs had been hailed as the Fab Four of Pakistani pop, Junoon was its Rolling Stones’ antithesis; where Vital Signs songs were sweet or woefully romantic (courtesy Shoaib Mansoor’s pen), Junoon chose to be far more adventurous, even risqué in subject matter. “Downtown Princess,” one of the three English-language songs on the debut album, and supposedly about an imaginary encounter in Lahore’s notorious Red Light Area boasted racy lyrics that were probably overlooked by censors who didn’t pick up on the double entendres: “I made a little offer for a night time favor/She got a little restless, made me real breathless/Night was getting longer/she was getting stronger.”

Clearly, the bad boys of Pakistani rock had arrived. However, their debut album, while attracting some attention and pulling in a rock solid fan base, wasn’t quite the commercial winner to which its members were accustomed. Two of the original band mates (Ahmad and Nusrat Hussain) had already tasted success as part of Vital Signs. Ali Azmat was also a known figure on the Lahore pop scene as lead vocalist for the less exalted Jupiters, and had the cheerful hit “Dosti” (later rereleased by Junoon) under his belt. Yet, Junoon’s heady mix of distortion guitars and partly English lyrics was perhaps a little too audacious for a virgin audience, who was already reeling from the unexpectedness of a dozen pop-rock bands suddenly surfacing into mainstream Pakistani music post-Zia.

Junoon’s debut album also marked my last-minute foray into rock music. Ahmad thought one of the songs on the album, “Jogia,” wasn’t suiting Azmat’s voice. And that is how I apparently became the first woman to sing an Urdu rock song. What I mistakenly perceived to be a ballad during the acoustic rehearsal turned out to be a monster of a song in the studio with screeching guitars and unapologetic drums. Despite the fact that it was never released as a music video, “Jogia” seems to have lived on in the fans’ memory as something quite radical for its day—or so I’m constantly told on Twitter and Facebook.

My friendship with Salman Ahmad dates further back. I remember going with him to the Hashoo Auditorium (then Karachi’s major space for public performance) to watch Ali Azmat in action with Jupiters. That concert was Azmat’s unintentional audition for Junoon. Later, I found myself on that same stage facing the music at Junoon’s launch concert. It was a glimmer of what the band was to experience on a daily basis, but a heady experience nevertheless for a rock novice.

The early years of the first two albums were investigative times for Junoon and its niche cult following (enterprisingly christened “Junoonis”). There was a newness, an irreverent need to push the envelope as the band grappled with its still elusive identity. Whatever else Junoon may not have been then, it was certainly becoming more political with songs like “Talaash” (1993) where the refrain “Free us from mental slavery” is repeated endlessly. Depending on the ebb and flow of Pakistani politics, Junoon’s freedom to sing their truth continually posed a challenge as apparently did the long hair for PTV. Yet perversely, Junoon’s political ambitions were destined to magnify as their fame grew, culminating controversially in “Ehtesaab,” an anthem which openly challenged political corruption and got banned on state-owned television.

I have always found many of Junoon’s more blatantly political songs balancing precariously on a preacher’s pulpit, but something about them seems to have clicked with a generation recovering from years of Gen. Zia’s stifling rule and looking for new direction. Ironically, despite all the political posturing it was with the relatively straightforward, inspirational anthem “Jazba-e-Junoon” that the band expanded its core audience to become a household Pakistani name. This was followed up with Azadi, Junoon’s first simultaneous release in India and Pakistan, which soared to platinum in four weeks, making the haunting “Sayonee” the band’s signature tune overnight. Junoon had already started openly delving into Sufi rock with “Saeein” on its second album, and Ahmad feels that the songs retelling the Heer Ranjha story on the first album were already indicative of what was to come, but certainly the “Sayonee” video with its whirling dervishes and beseeching self-reflection proclaimed the band’s Sufi-inspired manifesto out loud.

The problem with discovering yourself musically, however, is that a new sense of self can become the white elephant in the concert hall. While Junoon did have more hits ranging from “Bulleya” to the infinitely glossier “Pappu Yaar,” the sheer musical vitality of Inquilaab and Azadi proved slippery. For where indeed does one go from that kind of success? And how does one escape the reductive temptation of sloganeering?

As Junoon became more and more famous, political affiliations and causes other than music became determining points. What had seemed spontaneous and organic in the early years began to sound labored. Perhaps the only song to have withstood the test of time from later day Junoon is the wild and wonderful “Garaj Baras,” Ali Azmat’s solo swan song for the band’s final original album.

That Salman Ahmad is collaborating with newer acts for an album of Junoon tributes is canny and progressive. That the band couldn’t manage to settle its differences to come together for a grand reunion at 20 is disappointing. Whatever individual careers Ali Azmat and Salman Ahmad may have carved for themselves in the last decade, the magic that they created along with Brian O’Connell in Junoon’s live performances has proved somewhat elusive in their solo careers. There is no live band in South Asia and perhaps all of Asia that is so electrifying, so gloriously perfect on stage. With apologies to Indian M.P. Shashi Tharoor, who recently published a letter of platitudes about the band’s ability to unite Indians and Pakistanis, that is really not Junoon’s primary legacy. What mattered to young people listening to Junoon’s music in the late ’90s regardless of where they came from was that it synchronized with their personal rather than their political histories. And with Azmat on vocals, Ahmad and O’Connell on guitar, the chemistry was just right.

In the final analysis, it’s that undisputable fact and not the political blah-blah and posturing that makes Junoon what Q Magazine rightly called “one of the biggest bands in the world.”

Haroon is a journalist based in London