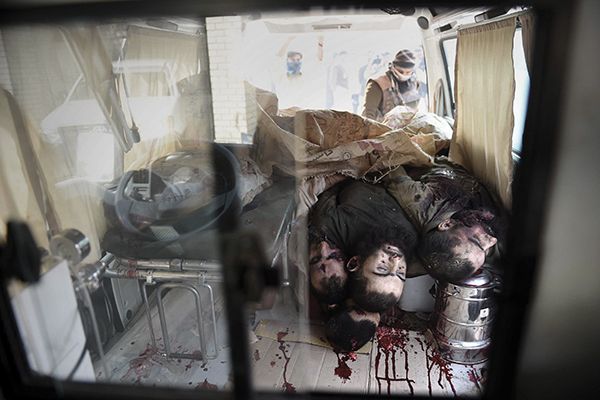 With Fazlullah, Pakistan is being taught a ‘lesson.’

Anywhere between seven to 16 terrorists were responsible for the attack on Peshawar’s Army Public School on Dec. 16. These men took instructions, on their cellphones, from the Pakistani Taliban chief, Mullah Fazlullah, who is allegedly hiding somewhere in eastern Afghanistan. The terrorists who entered the school ended up killing 150 people, including 134 children, with AK-47s and grenades before blowing themselves up.

The rising consensus of anger in the wake of this massacre has caused some to observe that Fazlullah may be isolated. This may be partially true, especially as Pakistan Army’s Operation Zarb-e-Azb in North Waziristan unfolds. But up in Kunar, he appears quite in control.

While Chaudhry Nisar Ali Khan, Pakistan’s interior minister, has said the attackers were Pakistanis, other officials have said the men were Egyptian, Moroccan and Chechen—a diversity that points to the breadth of Fazlullah’s command under the umbrella of Al Qaeda. In Swat in 2008, Fazlullah’s army of killers included Uzbeks, who distinguished themselves from their local counterparts by their extraordinary savagery.

After Peshawar, Pakistan’s Army chief, Gen. Raheel Sharif, lost no time flying to Kabul to get President Ashraf Ghani to order the pursuit and arrest of Fazlullah. (The Afghan Army chief denies Fazlullah was even discussed.) It is six years that Fazlullah has been planning and executing killings inside Pakistan from Afghanistan with a lot of help from Al Qaeda. Why has he been allowed to function freely in an Afghan province already known for its tolerance of Arab terrorists? Why was Kunar, a rocky province on the Pakistan border known as the “Mother of Al Qaeda,” kept free of the presence of U.S. and ISAF troops despite its reputation as a Wahhabi melting pot of international terrorism?

There is evidence that this was done deliberately, to teach Pakistan a lesson. Kunar is strategic territory because it is the training ground for all kinds of Al Qaeda franchises and also because it serves as a kind of tit for tat for Pakistan’s retention of North Waziristan as safe haven for the “Good Taliban” who killed Afghan and foreign soldiers across the border while sparing Pakistani forces.

According to The Long War Journal, a terrorism-watch website that has been hacked off the Internet in Pakistan, the U.S. Army began withdrawing from combat outputs in Kunar’s Pech River Valley in February 2011 to ostensibly focus on the province’s more populated areas. They were replaced by ill prepared Afghan troops who proved no match for the terrorists. “Afghan officials worry that the shift of troops amounts to an abandonment of territory where multiple insurgent groups are well established, an area that Afghans fear they may not be ready to defend on their own,” the website said at the time.

The abandonment of Kunar affected Pakistan. Despite being the most developed and prosperous of Pakistan’s seven tribal agencies, Bajaur faced upheaval. Today, its inhabitants are so insecure that they are selling their preteen daughters to traffickers in Karachi. Khyber, too, has been hit. Its troubles have transformed Peshawar into a jungle of ransom-taking and extortion. The terrorists who struck the Army school were also trained in Khyber, ruled by warlord Mangal Bagh and his dreaded Lashkar-e-Islam. The Army has been busy dislodging him and has killed an average of 50 militants per week for the last two years, especially in Tirah Valley.

Hopefully, the ending of North Waziristan as a terrorist safe haven will result in Kabul removing the security “exception” of Kunar which has damaged Afghanistan as much, if not more, as Pakistan. But will President Ghani be able to effectively deploy his large but notoriously incompetent Afghan National Army to clean up his “tit for tat” province? Kabul will have to cooperate with the Pakistan Army, but this cooperation will be limited given the hostility that exists between the armies after years of covert terrorist war for which neither can escape blame.

The Peshawar massacre aroused sympathy for Pakistan around the world, including in India, where Prime Minister Narendra Modi announced an official pause of mourning. However, an antiterrorism court in Rawalpindi decided the day after Peshawar to release a Lashkar-e-Taiba leader, Zaki-ur-Rehman Lakhvi, on bail. Lakhvi is accused of masterminding the 2008 Mumbai attacks. His release was not taken well by either India or by fed-up Pakistanis. A Rawalpindi lawyer told the BBC on Dec. 18 that the judge was under too much pressure and “could be attacked” if he didn’t let Lakhvi walk. The judge couldn’t have remained unimpressed by the royal treatment Lakhvi received in Adiala Jail. Similar treatment was extended to Ahmed Omar Saeed Sheikh, who lured U.S. journalist Daniel Pearl to his death and who made threatening calls to President Musharraf from his jail cell. Sheikh was arrested from the Lahore home of Ejaz Shah, a former Army brigadier who has been part of Imran Khan’s antigovernment protests.

General Sharif must take advantage of the national sentiment and its reflection in the all-parties conference convened by Prime Minister Nawaz Sharif in Peshawar after the massacre, and initiate firm steps to separate the state from terrorism. He must root out elements spawned by the interface of the state with asymmetrical war in the region in the name of jihad. Only then will Pakistan arrive at the correct diagnosis of the country’s growing incapacity to govern itself.

faith is where commonsense is not.

what is your reference to this line “Today, its inhabitants are so insecure that they are selling their preteen daughters to traffickers in Karachi.”

Good question… I too would like to see and for the sake of curiosity some documented supporting proof or evidence.

good luck, you will never get it….they say many things against Pakistan without a shred of evidence, they have done this to Iraq, to Iran, to Libya and many other nations they perceive as not too friendly to US interests….its an unholy alliance between you know who.

“Similar treatment was extended to Ahmed Omar Saeed Sheikh, who lured U.S. journalist Daniel Pearl to his death and who made threatening calls to President Musharraf from his jail cell. Sheikh was arrested from the Lahore home of Ejaz Shah, a former Army brigadier who has been part of Imran Khan’s anti government protests.”

I couldn’t disagree more with the author.Last time Omar Saeed made into headlines was because he had tried to commit suicide in the jail.A person enjoying luxurious jail life would definitely not resort to scuh option.
Omar Saeed Sheikh wasn’t arrested from Ejaz Shah’s house.On realising that agencies are just inches away from getting him he voluntarily presented himself to the law enforcement agencies.I don’t know how modern day writers can get away with fact distortion so easily.

its lazy journalism, who will verify and fact check an article on Pakistan, they can write anything, then the Indian media will jump on it, and quote it a million times till it becomes the truth, which Fox news will gladly publish and invite guests to speak on how Pakistan is a two faced state, all starts with a lie somewhere….like here.

Afghan army chief is lying, Gen Raheel did not visit Afghanistan hours after the school attack to have breakfast….it was not inly discussed but a veiled threat was given, either they do it or Pakistan will come into Afghanistan and do it, and by annonymous Pak Mil accounts, Fazlullah has been killed by Pakistan Airforce and his body has been recovered by Pak commandos from inside Afghanistan with ISAF and Afghan cooperation.

I am shocked at the many unsubstantiated write ups in this article. The author must be noted for his inacuracies. Not all of them could have been done mistakenly.