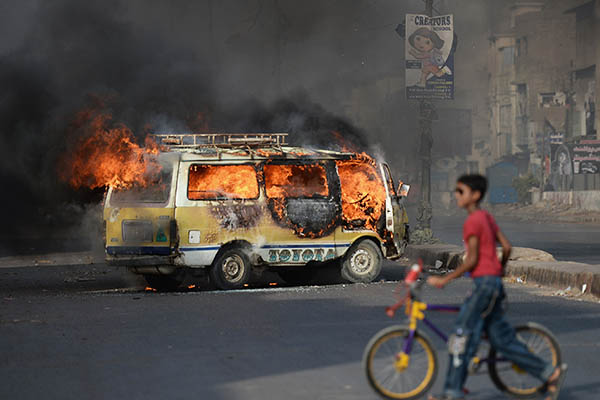 A truck set on fire by protesters after news broke of Altaf Hussain’s arrest in London. Asif Hassan—AFP

Can the MQM survive without the leadership of its charismatic and larger-than-life founder?

For over two decades, Altaf Hussain has wielded control of Karachi half a world away from his drab London suburb home. His arrest on Tuesday by British police has left Pakistan’s biggest city on edge and fuelled questions about the future of his political machine.

The 60-year-old is revered by his fiercely loyal supporters—mainly ethnic Mohajirs who migrated from India at the time of Partition—but critics accuse him of running his party as a violent mafia-like organization.

Party workers appeared to be in a state of shock Wednesday at a protest rally organized on the main thoroughfare of Karachi and attended by thousands.

Kashif Ahmed Shaikh, a diehard party supporter, showed off razor-blade cuts on his upper arms. “I wasn’t able to vent my anger on anyone so I did this for my leader,” said the 32-year-old at a protest rally against Hussain’s arrest in London on money-laundering charges. “He has done a lot for us and these wounds are just a humble way to express our love and reverence for him. We can even lay down our lives for him,” he added.

The sentiments are indicative of how deep passion for politics runs in Karachi, which grew from a small fishing town in the 19th century to Pakistan’s economic hub. It is home to large numbers of all the country’s religious and ethnic groups, whose political parties developed armed wings during the 1980s.

The MQM was founded by Hussain in 1984 in response to the marginalization of Mohajirs—migrants who fled India amid the violence of the Subcontinent’s Partition. They are mainly concentrated in the cities of the southern Sindh province, especially Karachi where they form a majority.

Nida Kirmani, an academic at the Lahore University of Management Sciences, said the Mohajir community felt aggrieved by quota systems and preferential treatment for other groups. “The rhetoric was that they struggled, they sacrificed to come to Pakistan and that’s why they should have rights. They believed their migration justified the creation of Pakistan,” she said.

Despite the MQM’s early successes in bringing development and assistance to Mohajirs, the turbulent city continued to see violent clashes resulting in a military operation in the city in 1992. Hussain fled the country that year, saying he feared for his life, to settle in London, where he began to address thousands of supporters in Pakistan by videoconference or simply by phone.

Despite being repeatedly accused of inciting violence during his speeches, British authorities awarded him with a passport in 2002—partly due to his party’s secular, anti-Taliban outlook.

Hussain wrote to former British prime minister Tony Blair in 2001 offering help against Al Qaeda in return for the abolition of the country’s Inter-Services Intelligence agency, the British government confirmed two years ago.

Following his arrest in London, MQM leaders made several appeals for calm. Though there have been scattered outbreaks of violence, the peace has thus far held—but analysts question how long it will last. “Unfortunately in Pakistan all political parties, with the exception of a few, are one-leader dominated parties and once that leader is not there the party suffers,” said Jaffar Ahmed, a long-time MQM observer in Karachi.

“Altaf Hussain is a father figure and he cannot be substituted at any cost,” Farooq Sattar, MQM’s leader in Pakistan said.

If Hussain is eventually removed from politics senior figures like Sattar could find their ability to maintain control over local-level party leaders in Karachi tested, said Laurent Gayer, an analyst at the Center for International Studies and Research (CERI) in Paris. “Are they capable? That’s the key question,” said Gayer, who will this week launch a book on the city, Karachi: Ordered Disorder and the Struggle for the City.

“I remember the words of a friend in Karachi a few years ago: the decline of the MQM could be as violent as its emergence. Have we arrived at that moment yet? I don’t know.”

Ahmed, the Pakistani analyst, said in the short-term, the MQM had probably made contingency plans for who would lead after Hussain, given that the British investigation began some years ago. But over the long run, demographic changes—particularly the arrival from the country’s northwest of Pasthuns, who are denounced by the MQM for their “Talibanization” of the city—together with internal dissent could threaten the party’s hegemony, he added.

MQM, despite their rightly justified reputation for violence, remain the best option for Karachi simply because they are a locally based, secular party that consist mostly of educated middle-class people and to date they’re the only representatives in the country of Karachi’s largest ethnic group.

MQM’s successor in Karachi isn’t PPP, PTI or ANP – it’s the TTP and their rogue affiliates, who are lying dormant in the city just waiting for the right opportunity and have already established a formidable presence in many parts of the city. They’re a far worse evil than MQM, so all those who are delighted at MQM’s downfall should be careful what they wish for.

I competely agree with the comments posted by my friend Ali S above. MQM is the only party in the whole country that does not have rich and corrupt feudals supporting the party base. Its largely a middle class population who comprise this political party. They are the only hope for this city which should have the status of a country in it own right given the population size, the revenue generation and the minimal percentage of total national spend federal government allocates for this city.

Ali S – the kind of votes PTI got from Karachi in 2013 elections – upto even 35000 from MQM heart land Azizabad – shows quite too well that PTI would be MQM’s successor in Karachi in 1-2 terms at the most. Besides, let’s not give MQM an escape room that ‘oh MQM protects us from the greater evil TTP out there’ – MQM is no protector of sorts. Lastly, anybody who has seen MQM torture cells where 13 year kids butchered bodies would rather be blown up by a TTP’s suicide bomber than be tortured and butchered by an MQM fascist.

MQM would be great middle class political party only if stop its terror and militant wing! its reliance on violence made it as more of Mafia than a party, same ill gotten money and murders now haunts its chief in London that has provided him refuge for 2 decades to operate this terror network.

Its absolutely rubbish idea that TTP is going to replace MQM, given the fair chance, people of Karachi can make better and informed choice without fear! Sooner it leave its militant style of thuggery, it will survive as political force! same goes for other militant winged parties in Karachi.

MQM representing middle class Pakistanis is laughable at best. This party, more likely a terrorist organization, has brought Karachi to its knees from a once prosperous city before the early 80’s to a mad house, where ethnic cleansing, racism and routine threats are encountered every day by its citizens.

We the 90% of Karachites hope that MQM will be finished just like the Nazi part of Germany after world war II.