The Long Trek to ‘Freedom’ 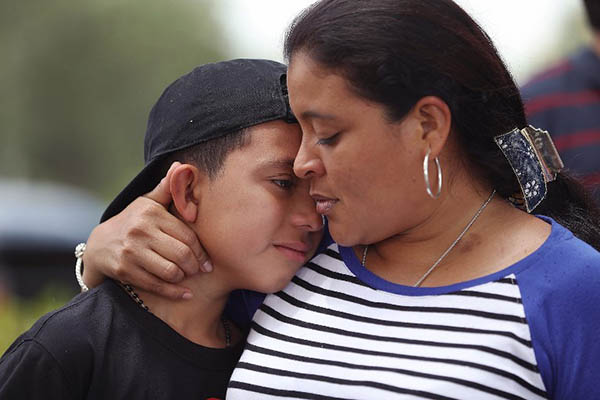 Fleeing for their lives, migrants hope to find refuge and safety in America

First, the family store was looted. Then came phone calls demanding money, lots of it. Finally, threats to kill their two daughters. For this family it was time to leave Guatemala, right away, and seek asylum in the United States—like tens of thousands of other Central Americans who can no longer take life lived in abject poverty or under the thumb of ultra-violent street gangs.

“Things spun out of control,” says matriarch Jimena, who prefers not to give her last name, for safety reasons. “The threats were so exorbitant that they asked for amounts of money we could not amass by selling a kidney,” she told AFP in Tapachula, a Mexican town on the border with Guatemala and staging ground for the long trek north in search of a better, safer life in the U.S. “Before we decided to leave, the threats were that they would kill our daughters,” said Jimena.

Persecution from the street gangs is rampant, said Kristin Riis Halvorsen, head of the U.N. refugee agency’s office in Tapachula. “No one is safe. Obviously we see that people try to make the best decisions they have left. It is a matter of saving their lives.”

It is in Tapachula that many migrants begin the long trip through Mexico en route to the U.S., to either sneak in or request asylum. It is a dangerous journey, with travelers enduring harassment from Mexican authorities or the risk of running into Mexican crime gangs.

Near Tapachula is the Suchiate River, which divides Mexico and Guatemala and where it is common to see whole families on makeshift boats, lugging their life’s belongings in a couple of suitcases. Other regulars are merchants or people who make a living going back and forth between the two countries.

“Here, take a couple of steps and you are in Mexico,” says a man who shuttles people across the water in one of those vessels. The traffic is non-stop.

With their lives in danger, Jimena did not hesitate to cross the river to enter Mexico. Here, they are filling out paperwork with the Mexican authorities before moving on. “We decided to flee because the situation in our country is so bad that we could not stay there. Our life was in danger. I cannot put my daughters’ lives at risk,” said Jimena.

Staying in Mexico is not a good option because it is too close to Guatemala and there is the risk that the gangsters might come after them. What’s more, in Mexico they have no friends or relatives. “We thought about staying here. But it’s hard not knowing anyone, without having the support of somebody. Life here is hard,” said Jimena’s husband, who refused to give even his first name.

But if and when they arrive at the U.S. border, a cold reception awaits them thanks to President Donald Trump’s “zero tolerance” policy of detaining and referring for prosecution anyone who crosses the border without papers, even those seeking asylum.

Until Trump suspended it last week amid an international outcry, U.S. policy was to take away the children of parents detained at the border. But some 2,000 kids remain in the care of U.S. authorities, and it is not clear how long it will take to reunite these families.

“First, I am going to try—surrender directly to the immigration authorities and, hoping God will touch their hearts and they will let me stay,” said the husband. “We have thought about surrendering but people are saying no one is being let in any more. Otherwise, I don’t mind climbing over the fences. Anything to save my daughters’ lives,” said Jimena.

U.S. authorities say that from March to May of this year, more than 50,000 people have been detained crossing over from Mexico illegally. Of them, 15 percent do so as families and eight percent are unaccompanied minors.

While they decide how to get through Mexico, Jimena says she wishes that U.S. authorities would try to understand their plight. “There is no logical or real way they can understand what is happening,” she said. “The hardest thing we can do as human beings to leave one’s family behind. Leave the people that watched you grow up, your parents, crying out of fear that something is going to happen to you during the trip,” said Jimena.