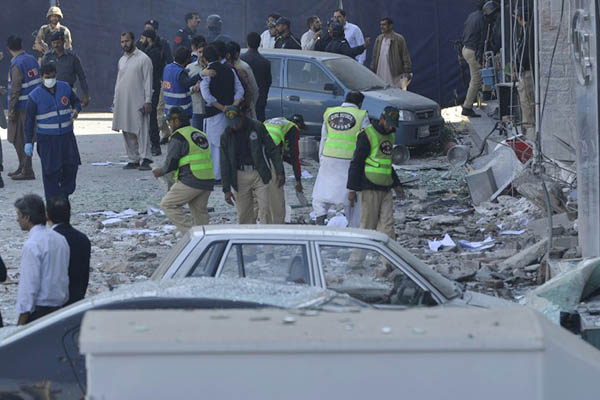 Pakistan’s fight against militancy has no end in sight.

Pakistan is at war. Any belief that this oft-repeated phrase was an exaggeration was dashed in the past two weeks as militants struck major cities in all four provinces. Today’s explosion in Lahore’s DHA neighborhood, occurring at 11:12 a.m., has proven a grim reminder—if any were still needed—that the resurgence of militant violence is undeniable.

The bloody aftermath of the past few days has made it hard to remember, but there was a visible lull in violence in the closing days of 2016 and through early 2017. It wasn’t to last. On Feb. 13, almost a year after Pakistani Taliban offshoot Jamaat-ul-Ahrar claimed responsibility for an attack on a park in Lahore over Easter weekend, the militants struck again. The attack on police providing security to protesters outside the Punjab Assembly shattered the illusion that the capital of Punjab province was immune to the militancy that continues to plague Pakistan 2 years after the launch of the military’s Operation Zarb-e-Azb. But it was merely the beginning. In succession, over the next two weeks, Jamaat-ul-Ahrar and the Islamic State militant group claimed bombings in Peshawar, Quetta, Karachi, Sehwan and Charsadda, killing over 100 people and leaving at least 300 injured. Departing from their previous policy of attacking government and security institutions, the militants have resorted to softer targets, such as protesters and Sufi pilgrims. The military, under the leadership of new chief Gen. Qamar Javed Bajwa, vowed it would target all militants regardless of affiliation and launched a nationwide paramilitary operation, including in Punjab province, against militants and their sanctuaries. This may have proved a bridge too far.

The immediate result of the recent burst of terrorist activity has been increased fear, panic and confusion. The explosion in DHA was initially attributed to a generator explosion before being amended to a bombing, then a chemical explosion and finally a muted “investigation” into what caused the blast that left 8 people dead and 30 others injured. According to a Counter-Terrorism official investigating the blast, forensics have proven the presence of 8-10kg of explosive material in the building, but it is still too soon to say whether the bomb was remote controlled or on a timer, or even what the actual target was. Unlike previous attacks, which were immediately claimed by terror groups to local media, no group stepped forward to accept responsibility for the DHA blast, leaving investigators and observers struggling over how to proceed.

Underscoring that confusion, residents of Lahore resorted to sharing rumors and conjectures to try and make sense of the carnage on their streets. Traumatized citizens claimed any loud noise was a terror attack, with unverified—and subsequently proven false—reports alleging explosions in the equally affluent areas of Gulberg and Mall Road, also the location of the Lahore Press Club and the offices of various media outlets. Schools were shut down and major markets shuttered as police and paramilitary Rangers patrolled the streets to assure the citizenry that they were on the job. The terror—a primary goal of any militant attack—was so rampant that any denials from government officials about the rumors were greeted with derision on and off news channels. To prevent such panic in future, a police spokesman told Newsweek, a probe was underway to determine the source of rumors with intent to punish them for disturbing the peace. While this may add to peace of mind, it’s unlikely to stem terrorism’s rising tide.

Operation Zarb-e-Azb has been considered a success in ridding Pakistan’s tribal areas of militants and driving them underground. According to the South Asia Terrorism Portal, between 2008 and 2010, there were 17 major terrorist strikes—in Lahore alone. From the time Zarb-e-Azb launched in June 2014 till January 2017, there were 18 major attacks in the entirety of Pakistan. And while this seems to indicate a slump in terrorism nationwide, recent attacks suggest that a rejuvenated attempt to terrorize Pakistan is underway.

Prior to Zarb-e-Azb, the militants appeared to target markets, restaurants and schools; after it, they started aggressively attacking security forces, giving civilians a reprieve but proving no less deadly. This was enough for our media, which showered praise on former Army chief Gen. (retd.) Raheel Sharif for reducing terror attacks on civilian targets. But observers, often derided on local media as Pakistan’s own Cassandras, maintained that even though the militant threat appeared diminished, the groups that nurtured them had not been eliminated and could resurge when the opportunity arose. Adding fuel to their beliefs are reports from internally displaced persons alleging that many militants joined them in evacuating towns and cities targeted by the military during Zarb-e-Azb and went into hiding.

For now, a lot is riding on the military’s Operation Radd-ul-Fasaad. Analysts and government officials who have been demanding that the military expand its operations in Punjab province have finally got their wish. But will that help? “It will result in another lull in violence, just as Zarb-e-Azb led to a lull,” says security analyst Ejaz Haider. “Radd-ul-Fasaad has more Rangers involvement, which will help focus the fight.”

The damage done to the national psyche, however, may prove harder to erase. The government’s inability to form a singular narrative has left people with little choice but to form increasingly bizarre theories about why militants are striking now and what their ultimate goal is. Following the DHA blast, TV pundits and armchair experts alike proclaimed it was an attempt to block Pakistan from hosting the final match of the ongoing Pakistan Super League cricket tournament in Lahore. Similarly, others claimed it was a bid by the military to expand its control over the provincial capital of Punjab. There is no need for such conspiracy theories. The militants have told us—repeatedly—exactly what they want: shariah law in Pakistan and the rolling back of decades of progress. As for why they’re attacking now, that answer isn’t too difficult either. “They [militants] have had time to regroup,” says Haider. “Given enough time, they can do so again.”