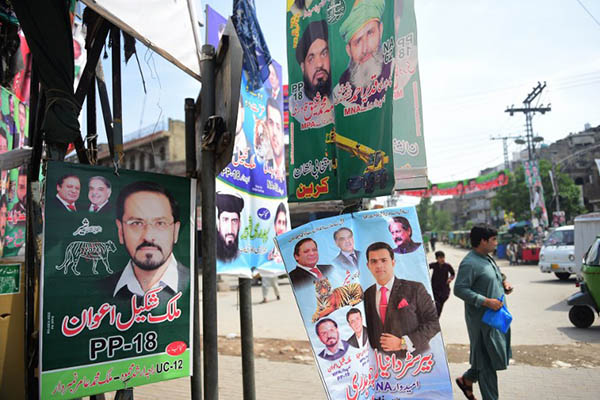 The Pakistan general elections on July 25 come after a brief but acrimonious campaign, complicated by a string of attacks—including the second-deadliest bombing in the country’s history—which have prompted security fears.

The election represents only the second democratic transition in a country ruled by the military for roughly half its history, and is considered a vital step for Pakistan, with its fragile institutions and turbulent past.

The main players in the polls include two who cannot even hold political office—former premier Nawaz Sharif, and the military—as well as the leaders of the three main parties.

Dubbed the Lion of Punjab, Sharif was thrice prime minister but has never completed a term, his latest ending when he was ousted by the Supreme Court last year and banned from politics for life over corruption.

The saga reached its peak earlier this month, when he was sentenced in absentia to 10 years in prison. Sharif spectacularly returned to Pakistan from London a week later and was arrested. Sharif claims he is being targeted by the military. Analysts say he has returned to fight for his political life, as his Pakistan Muslim League (Nawaz) party stumbles in the campaign.

Seen as a combative and tenacious figure, his current dispute with the Army—with which he was once close—is largely attributed to his desire to shift power to the civilian government, and to seek warmer diplomatic relations with India.

The Army, perceived as the country’s strongest institution, has ruled Pakistan for roughly half its nearly 71-year history, and is widely believed to control foreign and defense policy. It has been broadly accused by the media, analysts, activists and politicians of what one think tank called a “silent coup” against the PMLN, and in favor of opposition stalwart Imran Khan.

Several cases of kidnappings and threats against media and political activists have been reported, and diplomats have voiced concern over censorship allegations ahead of the polls. The Army has categorically denied the claims and says it is taking “no direct role” in the elections.

A former World Cup cricket hero turned politician, Khan has become the main opposition leader in recent years and makes no secret of his ambition to become prime minister.

Known mainly in the West as a talented sportsman and infamous playboy, he presents a significantly more conservative and devout face to Muslim Pakistan. His Pakistan Tehreek-e-Insaf (PTI) party, founded in 1996, has governed northwestern Khyber-Pakhtunkhwa province but long had to settle for a handful of seats nationally.

The fall of Sharif and the PMLN’s floundering campaign represents his best chance yet at the leadership, even if an outright majority remains uncertain.

Critics consider him unfit for office. Some call him “Taliban Khan” and attack his repeated calls for talks with violent insurgent groups, while he has also been criticized for pandering to Islamist hardliners over blasphemy.

Others openly suspect him of links to the Army.

Nawaz’s younger and less charismatic brother, Shahbaz became president of the PMLN after his elder sibling was ousted, and is theoretically leading the party into the vote. His quieter style is being overshadowed by his brother’s loud quarrel with the military. But he occupies a key position in politics, having spent more than 10 years as chief minister of Punjab province, which represents over half the country’s population of 207 million.

Shahbaz, also an influential businessman, is reputedly less stubborn and therefore more acceptable to the military than Nawaz or his anointed political heir, daughter Maryam, who has also been jailed for corruption.

There has long been speculation that the two brothers have clashed over their political differences, but they have never corroborated the claims.

His mother Benazir Bhutto, the first woman to lead a Muslim country, was assassinated in 2007. His grandfather Zulfikar Ali Bhutto, also a prime minister of Pakistan, was hanged in 1979.

At 29, Bilawal Bhutto-Zardari has little experience and the chance of election victory for his family’s Pakistan Peoples Party is deemed almost nil—though he could become kingmaker by joining forces with the PMLN or PTI, if either fail to win an outright majority.

The task would be difficult for the scion of a family who once dominated Pakistani politics but whose party is now in decline, even challenged in their stronghold in Sindh province. His father, Asif Ali Zardari, nicknamed “Mr. 10 percent” because of numerous accusations of corruption, has previously been president of Pakistan. There is speculation he could seek the post again—or demand other concessions—in any coalition deal.