The Man Who Dominated Uzbekistan 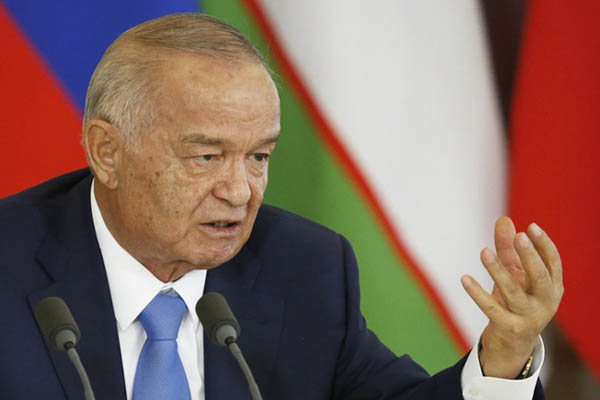 Lambasted for brutally crushing dissent, Uzbekistan’s President Islam Karimov kept a stranglehold on power for over 25 years—even at the expense of his own daughter.

The veteran leader, 78, who died on Friday several days after suffering a stroke, played Russia, China and the West off against one other to avoid total isolation as he steered his strategic state out of the collapse of the Soviet Union. He was to be buried on Saturday in the ancient city of Samarkand, his hometown, state television said.

“Islam Karimov has been the state for over quarter of a century, ruling with an iron fist,” said Steve Swerdlow, Central Asia researcher for Human Rights Watch. “The last 25 years have been known largely for repression—that’s his legacy.”

Karimov’s authoritarian rule came under fire over accusations of heinous rights abuses, most prominently over bloodshed in the city of Andijan in 2005, but the most serious threats to his reign came from far closer to home. In a court drama with echoes of Shakespeare, the former Soviet apparatchik—at the helm since 1989—had his eldest daughter put under house arrest in 2014 during a family feud in which she compared him to brutal Soviet leader Joseph Stalin.

The spectacular fall from grace of Gulnara Karimova—a pop-singing, corruption-tainted socialite once seen as a possible heir to her father’s throne—appeared to show just how far Karimov was willing to go to keep his iron grip on power.

Karimov, long the subject of rumors about his ill health, has now left no obvious successor in a country that has never held an election judged free and fair by international monitors. He won Uzbekistan’s first elections after the fall of the Soviet Union in 1991 and last March cruised to his fifth five-year term with over 90 percent of the vote.

“Without a strong government there will be chaos in society,” Karimov warned ahead of the poll.

Born on Jan. 30, 1938, Karimov was raised in an orphanage in Samarkand. He studied engineering and rose up the Communist Party ladder to become head of Soviet Uzbekistan in 1989. Like the authoritarian leader of neighboring Kazakhstan, Nursultan Nazarbayev, Karimov led his country through the transition from the former USSR without any major challenge to his rule.

Critics, however, say he squandered the potential of his cotton-rich nation of 30 million—by far the most populous in ex-Soviet Central Asia—and allowed a corrupt elite to amass huge fortunes.

The major challenge for Karimov came when the palace power struggle within his own family emerged in 2013. The house arrest of the once-untouchable Gulnara Karimova, 44, came after a war of words played out in the international media during which she accused her mother and younger sister of sorcery, and assailed the country’s security chief on Twitter for harboring presidential ambitions. Prosecutors have since launched investigations into her and her business associates’ alleged connections to a “criminal gang.” Formerly a fixture at fashion events in the West, Karimova is also under investigation in Europe over a $300 million telecoms corruption scandal.

After the majority Muslim republic gained independence in 1991, Karimov launched simultaneous battles against Western culture and Islamic fundamentalism, stamping out radical groups at home. Right groups have repeatedly accused his regime of torturing opponents and using forced labor in the lucrative cotton sector.

The authorities have consistently denied the reports, including the notorious claim that two alleged extremists were boiled alive in 2002.

The most persistent accusations from rights activists remain that government forces killed hundreds of demonstrators in the eastern city of Andijan on May 13, 2005. The government dismissed the reports of a massacre and said the violence was a response to Islamic extremism.

Although there was no independent investigation of the killings, which followed the arrest and subsequent jailbreak of a group of religious businessmen, a report by the Organization for Security and Co-operation in Europe (OSCE) estimated the death toll at between 300 and 500 people.

Facing Western criticism, Karimov shut down a U.S. military base in the country that had been used to support Washington’s campaign in neighboring Afghanistan, threatening ties he had nurtured since the September 11, 2001 attacks. But over a decade on, Uzbekistan still receives U.S. aid and both Secretary of State John Kerry and Russian leader Vladimir Putin have jetted in for talks over the past year.

As world powers continue to vie for influence, activists wonder how the nation’s rights record can ever improve.